The last India and Pakistan played a bilateral series was in an age where Instagram wasn’t a habit, Trump was just a tycoon not yet a President, and Caitlyn Jenner was Bruce Jenner.

A lot has changed since 2012-13, the last that Pakistan visited India before usual political differences and anger completely covered cricket between the two nations.

Although, what’s followed since is a dangerous cricketing age not merely to Rashid Khan troubling batsmen who seem clueless but where T10 is actually being entertained as a concept.

The concern, however, at least to the purist is whether India and Pakistan can resume normal ties like before.

And this brazen indifference- well, you and I know it is that- between India and Pakistan has reached journalism as well.

A few hours before, Shoaib Malik confidently declared that his team has the best possible chance of lifting this World Cup.

There was not a single opinion piece in Indian media or on television shows that beautifully debate every single element on the game regarding Malik’s claim.

We know Pakistan may not be writing great things about its neighbor. But why weren’t cricket fans in India informed on what might be actually true regarding the experienced Pakistan batsman’s claim?

His side has the caliber in Fakhar Zaman and Babar Azam, despite a lack of world cup experience?

Which team, barring India or to a good extent England or New Zealand poses hard-hitting questions at others? These are strong units.

They not only have frontline batsmen but great balance in their attack and what’s more?

Each of these sides, and let’s focus on Pakistan’s ‘arch-enemy’ India profoundly have two exceptional match-winners in Kohli and Rohit.

Interestingly, what might have handily countered Malik’s claim would’ve been the presence of experienced and accomplished batsmen in each- Proteas, Lanka, Windies line-ups.

Yes, no one is denying Smith and Warner’s return will inject all the life into a hopeless Aussie team.

But can Pakistan- with Malik and Hafeez set to support sheet anchors in Fakhar and Babar- tackle a South Africa with Faf, Amla, de Kock or a Windies with Gayle, Hope, Lewis, Hetmyer?

Cricket’s a game of uncertainty. This is a cliche unless one understood that, that India and Pakistan may never play bi-laterally anytime soon threatens to make the game sullen and dull, at least, where millions on either side of the border are concerned.

This is why am frustrated that as fans haven’t we all had enough of this frustration of not seeing two admirable sides return to the field where they’ve played some sensational cricket for ages together?

Truth is that anyone who says that we are done with each other is possibly hiding behind the Youtube re-run of Sachin’s 98 off 75.

Don’t you wish for anecdotes like the ‘Friendship Series’ to return in a new era especially since this age is one where cricket is breaking new ground, the women’s game finally succeeding to beat the bias associated with gender, one where a Javeria Khan, Diana Baig, Bismah Maroof doing their bit to uplift the sport just the way a Smriti, Veda, and Poonam are?

It’s sad that as a common man, I can’t call up PCB and request them to grow up the same way I know I may not be entertained beyond a few social media posts, personal letters, and most of all, an online petition from the BCCI.

The frustrating part is that today, you and I have mediums to create a change and not the same reciprocation of interest from those who can create this change.

Surely, having India and Pakistan play today with Virat and Rohit, Bhuvi and Chahal pitted alongside Babar and Malik, Imad and Afridi wouldn’t be a bad idea.

One can’t see any harm in adding more heat on the cricket ground for as it is our globe is no stranger to suffering from climate change and global warming.

Plus, look at the bright side, two cricketing legacies played one another doesn’t affect world peace the same way it doesn’t compel Rawalpindi to disown it’s express or snatch away the regard we Indians have come to foster for Mr. Wasim Akram?

This theme of ignorance knowing well that media rights aren’t an issue, just the way ad revenue will perhaps not even arise as a concern should the two play is horrible.

It’s like you being made to suffer a traffic jam for an hour and a half with you eventually not even coming to know what the hell took up your time.

It’s berserk that the two nations only play in mainstream ICC events, like the ODI World Cup or the T20 World Cup.

What the hell is wrong with us all?

This ain’t some flawed political agenda that concerns the 22 players in any way, and definitely not the fans in any way either.

Get back on the turf. Don’t look away from each other.

Does it appear that am being mad?

Here’s a declaration. Like any fan of the two sides’ talents, I’m not getting a penny deposited into my account should Pakistan return to getting hammered by India.

Did that touch some nerve? Sorry.

I mean to say, I’m not benefitting in any way whatsoever by seeing Mohd. Amir surprise Indian batsmen with that swing and guile, the same way it doesn’t impact my personal life by seeing the ICC Champion’s Trophy 2017’s shocker of a loss to Pakistan.

And honestly, this so-called rivalry doesn’t concern me.

But hey, wait a minute.

What does is that the absolute lack of cricket given we are now in a seven-year absence. This kills the idea of excitement that a great sport, a unifier like this promises to serve.

When I was growing up, I wasn’t even a fan of Pakistan the same way Pakistanis weren’t India’s fans.

But hey, I was aware like so many of you the magic their talents were capable of producing.

The most I thought about Pakistan was during my growing up years.

It completely confused me that there was this sworn cricketing rivalry between the two that made itself evident on the cricket field, often through tongue-waging words and on other occasions, through actual physical contact.

I’ll spare you the dramatic cliche of saying we both- Pakistan and India that is- wore the same clothes, had the same culture, ate similar dishes and even looked quite a bit like each other.

But what was silly, outright silly was that back home in my country, I wasn’t entertained one bit if I ended up saying that Saeed Anwar was about as classy as a David Gower whenever the discussion of elegant batsmen arrived.

This was startling since Anwar didn’t do anything stupid ever to earn the ire of fans in India other than harassing us in his 194.

But maybe, what might have contributed to my misery with typical Indian fanboys was that they just couldn’t take it that Sachin wasn’t ‘God.’

Well, not for me.

My hero was Lara.

True to most sensitive nations and hey, I don’t blame them for it, accept the coldness offered to me was silly, the idea of having another man, from another region being celebrated with greater passion than one’s own ‘deity’ was perhaps some crime.

Funnily enough, I also ended up admiring Rahul Dravid with the same passion as I had admired Brian.

So I thought and this was during the end of my teens that any lack of ‘Patriotism’ from my end was now settled.

As a fan, if you can admire the idea of an IPL bringing together so many talents from around the globe into a common dressing room with the sight of a Dwayne Bravo dancing alongside MS Dhoni, why on earth couldn’t we have Shahid Afridi play alongside Viru?

Imagine the endless string of pleasure we were denied.

Okay sure, Lara wasn’t picked in the IPL which was surprising, why didn’t we see Yasir Shah being trained by say, Warne for Rajasthan Royals with Dravid mentoring the side?

Was all of this highly impossible to imagine?

I don’t think that my Aadhaar card would be cancelled by my beloved country for telling it to kindly consider televising PSL in India or that Indian players, imagine the magnificent bench strenght that’s still to be tried, could be tried in Pakistan’s T20 event?

So what’s the bottom line?

Is there a future for Indo-Pak cricket?

Or would we have to wait for a Netflix documentary on this ‘sensitive topic for people to wake up thanks to some sepia-tinted nostalgia?

But you know what, Jim Morrison was right when he said, “I woke up one morning and got myself a beer; the future is uncertain the end is near.”

I just hope we aren’t staring at the end of this colossal cricketing history that’s remembered as a rivalry when it’s so much more.

Or maybe, I should grow up. 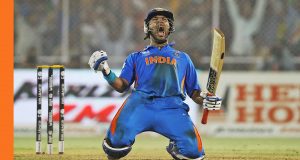 The Real Contribution Of Yuvraj Singh And Why We Must Not...

Gaurav Sethi - June 10, 2019
0
As soon as Yuvraj Singh announced his retirement, a flurry of nostalgic moments overwhelmed me. These ranged from ‘A brilliant white ball cricketer', to...