After MS Dhoni was wrongly adjudged out LBW in the first ODI against Australia, it sparked a debate over the decision review system again.

Opinion has always been divided on the use of technology in sports as the Puritans have been found frowning upon even the slightest change in the game they hold so dearly.

Gradually, the DRS has become a part of the modern game but the system comes with its loopholes. Impact outside the three-meter mark and umpire’s call continue to polarise views.

There were a couple of game-changing erroneous decisions under the DRS system in the last year’s Asia Cup. Steve Smith’s controversial dismissal in the Bangladesh Premier League also made headlines.

The DRS has turned tactical

The DRS was introduced to overturn the ‘howler’, as they say. It was there to take care of a decision which has gone utterly wrong and needs to be rectified in order to uphold fair play. However, with time, teams have reduced it to a tactical instrument.

For instance, if someone like a Virat Kohli or a Joe Root has been given out and if these top batsmen see even a little chance of it going their way or being umpire’s call, they don’t think twice before making the ‘T’ gesture to the umpire.

Similarly, bowlers do not shy away from taking their chances against the best opposition batsmen. Even if they see half a chance of getting the priced wicket, they are in the ears of their captain to go for it.

Especially, as there is only one review/innings per team in the ODIs, it becomes all-the-more valuable. If one of your top batsmen has eaten up a review, the others are left on their own. It is inevitable that a human error (from the umpire) would occur later in the game.

Like in the first ODI between Australia and India at Sydney, reviews of both teams were used up by the fifth over of the second innings. Hence, in 45 overs out of the total 100, there was no review to be had. That’s almost half the match! Then, what is the point of having access to technology and still not being able to maximize it for the greater good of the game?

Get rid of the umpire’s call

It is the umpire’s call which has left some amused and many amazed over the years. The fundamental issue is that either you don’t bring in technology in the game and if you do, then let it have its complete say.

When the ball hits the wicket, the bails come off; no matter even if it just brushes the outside part of the stumps. Just because an umpire, no matter how revered he or she is, has ruled a certain way, it should not have any bearing on the result. If it hits, it out; if it misses, it’s not out – as simple as it gets. Umpire’s call is what we have made up to give the impression of upholding the sanctity of umpires, an old institution of the game, you see.

If the end goal is to have the right decision made, a school of thought is also to entrust the DRS completely with the umpires. If after a particular decision, the on-field umpires think that the decision can be touch and go and that the use of technology is warranted, they can send it upstairs.

The 3rd umpire can also take suo moto cognizance of a decision as he has all the technical tools at his disposal. He can use the slow motion, hotspot, ultra-edge, ball tracker and all other available technologies and inform the on-field umpires of any blip. This way, the sanctity of the umpires will be maintained and the risk of umpires souring their equation with players would also be avoided.

Like it or not, technology will continue to increasingly become a part of cricket, all sports and every walk of life for that matter. Flashing stumps and LED bails started as an experiment in the Big Bash League and it did not take the entire world much time to embrace it. The Drone Cam has also become a part of the short format of the game despite there being repeated instances of either a catch or a boundary being missed because of it. Umpire GoPro cameras have also been introduced in various domestic T20 leagues across the world.

Perhaps, for the DRS as well, this is just a phase of evolution which will lead to a more bankable and trustworthy review system in the future. 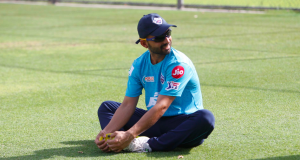 Will Ajinkya Rahane Return To 50-Over Fold? Is That Even Feasible...

Sameer Allana - September 6, 2020
0
Perseverance. Perfection. Patience. The first few words that come to your mind when you talk about Ajinkya Rahane. Seven years back when he scored...