It was the winter of 1994 and New Zealand was playing a tri-series in India alongside West Indies. New Zealand in the early 90s (August 1990- February 1997) was going through a prolonged phase of transition and lot of young players were given chances during the process. The team that came to India had some of the fresh faces. After their first game against West Indies at Margao getting washed out, the Kiwis faced host India at Baroda (Now Vadodara) on 28 October 1994, it was here that Adam Parore as a cricketer was born.

His Partnership of 180 with captain Ken Rutherford couldn’t win the game for New Zealand but through his innings of 96, he got the attraction of cricket viewers(one among them was me). The short-statured yet stoic and determined young man aged 23 showed, New Zealand had found something special in him and over the next decade he was an integral part of New Zealand Cricket.

Only 18 months later, while still in his teens, Parore played his first Test against England at Edgbaston in that English summer of 1990.

It was a historic moment for the Maori people as he was the first ever test cricketer among them. However, it was only after the retirement of Ian Smith after 1992 World Cup that Parore got a regular chance. In his earlier years, he was so good a batsman that in spite of not being picked as a keeper he was picked as a specialist batsman.

During the time Tony Blain and later Lee Germon donned the gloves for New Zealand between 1993-94 and 1995-1997 respectively, Parore played at no.3 being New Zeland’s Mr. Consistent.

Parore, however, showed his talent no matter whether he was playing as a keeper or as a batsman. The year 1994 was breakthrough for him he played some of his best innings that year. His 82 against Pakistan at Sharjah, 96 against India on a turning track at Baroda or a brilliant 108 at Centurian against South Africa established him as a vital cog in a young team.

His unbeaten 100 against a Curtly Ambrose, Courtney Walsh and Winston Benjamin-led attack at Christchurch in 1995 on a pacy Lancaster Park pitch was probably one of his top five knocks, and arguably one of the bravest knocks by a Kiwi keeper back in those days.

After Stephan Fleming took over as Captain in February 1997 and marked the return of country’s cricket to ascendency, Parore donned the gloves.

For the next few years, Parore became one of the best keepers in world cricket apart from being part of the experienced Kiwi core that featured Fleming, Cairns, and Harris.

Parore was a clever keeper, a wicked one, if you may, one who never wanted his bowlers to lose the battle from the batsmen; scenes of his encouragement in the form of casual murmuring are resplendent in the minds of the nineties cricket buffs.

While Parore was good on the field, it appeared, he wasn’t quite a stickler for spot-on behavior, his tussles with coach Glenn Turner along with Cairns between 1995-96 finding news headlines in the papers during tours featuring West Indies and India.

Parore revealed all of these in his Book ‘Wicked Keeper.’

During Fleming’s tenure while Parore’s batting declined but his stature as a senior pro and as a keeper increased in the side. He, however, played few fine innings, one of his best came against Steve Waugh’s invincible’ at Perth in November 2001 when he struck a brave 110 against a top class attack.

For those who thought Parore was the occasional slayer with words from behind where batsmen took guard, this was a fine reminder of his skill with the bat, not prowess as such but the gentleness of getting along with a batting challenge supplemented by the ability to build partnerships serving his side well.

A few months later, Parore announced his retirement post the Auckland Test against England in April 2002. By the time he finished his international career, he had played 78 Tests and 179 ODIs.

He was the most successful keeper in the history of New Zealand Cricket with 204 dismissals in Test cricket and 136 limited overs dismissals to his name (the ODI record was overtaken by Brendon McCullum later on).

In 2011 Parore became the first ever cricketer to reach the Mount Everest.

But here’s a thing that might strike the minds of those who saw him play.

In spite of having impressive keeping records to his name, one often gets this feeling that Adam Parore never justified the talent he had, rather the proclivity toward rigor to make something more scalable out of it.

It’s often said in New Zealand’s Cricketing circles that had he played to his full potential, Adam Parore would have achieved much more.

His story in personal life is also a lot similar as well, a broken relationship with a socialite that went into the court not exactly fetching him great headlines.

What was concerning to those who may have wondered where Parore disappeared all of a sudden was this: marriage at 43 with a 22-year-old that survived for 2 years.

But then that was Parore, a bit unpredictable, a bit a shrewd, behind the stumps just as he was effective and deceptive from the 22 yards. 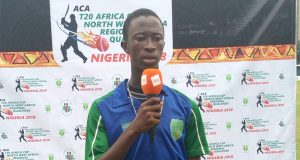 Dev Tyagi - December 12, 2021
0
There's always something inspiring, something special when a young man recollects the moments that made him what he...