India are all set to lock horns with New Zealand at their backyard for a sixth time, after thirteen long years.

It was in 2006 when India last toured New Zealand. You can picture immediately in your mind as to what all has changed since then, can you?

Only three players from that time – captain Mithali Raj, veteran Jhulan Goswami, and former New Zealand captain, the sensational Suzie Bates- are around as they were then.

Surprised at that number? On the other hand, New Zealand won a contest 27 times with a solitary game ending up in being a tie.

This clearly shows the White Ferns’ dominance over India in the limited-overs game.

But where the numbers stack up, all of this effectively is in the past. What about the present: what might be there on the teams’ minds?

After having a not-so-good ICC World T20, both the teams will surely try to give a tough fight to each other, particularly also because the series is going to play a crucial role for their selection in the next 50-over World Cup. In here is a crucial fact for us fans.

After playing 9 ICC Women’s Championship (2017-20) matches, the White Ferns are in the second place with 12 points while India are placed on 5th with 8 points on the points table.

If the White Ferns win the series, they will be placed at the top of the table, surpassing Australia. On the other hand, however, should India win, they will be in the second spot.

Moving on, let’s rewind the clocks a bit and understand where the two teams stand in some immediate previous contests played between one another.

Last time that India faced the White Ferns was during the ICC Women’s World Cup in 2017. There’s not been a single ODI ever after hitherto this point.

After having lost to South Africa and Australia in the group league matches, India had to win their last group league. The problem was, they weren’t up against any lame pushover: in Bates, Tahuhu, and the rest, the White Ferns to keep their hope alive of winning the World Cup; which was a virtual quarter-final.

Not a bad total, right? Wait till the bowlers ensured it would look an immense total anyways.

This pick was bang on point.

Gayakwad utilized her chance and finished with a career-best 5 for 15. There were smiles everywhere and some kind of retribution for the underdog in the sport everywhere. One didn’t know what to celebrate more: Mithali Raj’s sixth ODI century or Gayakwad’s fifer as both great efforts set the stage of India’s impressive win.

The end statistical reading: Raj’s team had won by186 runs.

Moving on, prior to the World Cup, both the teams had met each other during the White Ferns’ tour to India in 2015.

It was a five-match ODI series. India would win this series as well and by a margin of 3-2.

This would be a series that started with a sweet victory for the hosts.

Although it must be said, this was no easy a task whatsoever as Lea Tahuhu, Nielsen, and Kasperek didn’t give any room to the batters with their economical spell reducing Mithali’s girls to 55/6.

That is when things turned once and for all and do you know which batswomen turned out albeit as the unlikely savior?

Back then, veteran Jhulan Goswami played a crucial knock of 57 off 67 and helped India put up 142 on the board.

Though the run-chase seemed to be easy, India’s spinners- Sneh Rana, Ekta Bisht, and Harmanpreet Kaur, the current T20 captain bundled the Kiwis to 125, thus setting up a 17-run win.

The second match in the series turned out to be the thrilling equalizer wherein New Zealand managed to chase down 164 with only three wickets in hand.

All-rounder and vice-captain Sophie Devine- needless to remind, among the finest all-rounders in the modern game and also someone no team regardless of ICC ranking wishes to take lightly- top-scored with 33, and thus found a way to somehow anchor the innings till the end after her team had lost a string of early wickets.

The third contest was further retribution for New Zealand scintillating for both of them; where New Zealand wanted to keep their winning momentum on and India tried to get back in form. However, the result went for New Zealand’s side. Openers Rachel Priest and Suzie Bates ensured a 6-wicket victory after they bowled out India within 182. It was only Veda Krishnamurthy who top-scored 63 for her side.

The fourth match was crucial for India to level the series while New Zealand were obviously gunning for victory. New Zealand elected to bat first after winning the toss. Satterthwaite’s 43 and Devine’s 102-ball 89- reminiscent of her usual belligerent standards- helped them put 202 on board.

Niranjana and Gayakwad scalped three each and Kaur took 2.

In reply, India got off to a flying start. Openers Smriti Mandhana, who’ll be again crucial on her maiden NZ tour this time, and Thirushkamini set the foundation by adding 49 in 16 overs.

Later, captain Mithali Raj anchored the innings till the end.

At first, she added 126 runs with Mandhana. And then joined Harmanpreet.

The decider went to India.

Brings back some memories?

The bowlers and especially Thirushkamini, with the bat, guided India to seal the series by 3-2.

Having opted to bat first, New Zealand were reduced to 12 for 2 inside five overs. Jhulan, Gayakwad and Deepti Sharma’s 2-wickets apiece along with Bisht and Kaur’s 1 scalp each hammered New Zealand, who could only put 118 together.

Thirushkamini’s unbeaten 62 and Deepti Sharma, 44, the other valuable unbeaten knock for India helped them claim a comprehensive 9-wicket win.

All this told, let’s dive further into the past.

Prior to the 2015 series, India faced New Zealand in the NatWest Women’s Quadrangular Series in 2011.

In the first match, New Zealand won the toss and chose to bat. Doolan’s 76 and Bates’ 34 ensured 201 on the board.

Here, Jhulan Goswami picked up six wickets in a 10-over spell.

But her effort would go down in vain as the batters weren’t able to build a partnership, eventually packing up on 162.

Harmanpreet Kaur top-scored for 33 for her side.

After this dismal show of batting, India and New Zealand both faced each other for the 3rd Place play-off in the series.

Having been put into bat, India’s struggled with the bat. Punam Raut top-scored with a 38, staying put during times of pressure and lasting for a good 13 overs on her own.

Broadmore’s three-wicket haul, Mackay-Doolan’s two-wicket apiece bundled India to another below per score of 150.

With these 150 runs in hand, India walked into the field with full confidence.

Left-arm spinner Ekta Bisht and seamer Amita Sharma did the major damage in the batting line-up.

They scalped three wickets each while Jhulan Goswami bagged 2 wickets and restricted the opponents to within 118, thus securing the third place in the tournament.

Though one may think according to statistical finding that New Zealand are no longer the strong side they once were, India, as seen in their bi-lateral wins last year, impressive ones at that against South Africa (in South Africa) seem in some serious form.

But undermining the White Ferns would mean playing down a team that’s responsible for ODI cricket- including men’s game’s- highest ever team total.

Remember Ireland? Does it bring back some haunting images for those facing the White Ferns?

Yet, India have to face two challenges this time.

First up, barring Mithali Raj and Jhulan Goswami, the rest of the team will play in New Zealand for the first time. To get accustomed to the conditions, the side landed in the White Ferns’ den 10 days prior to the start. Training camps have been underway already.

Second, the fiasco surrounding the team’s coach has only recently gotten done with. The series will be as crucial for WV Raman as it will be for the girls. 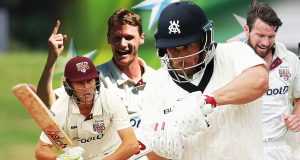 What Do The New Faces In Australia Bring To The Side?

Sameer Allana - September 25, 2018
0
What do the new players in Australia squad present? Of course, a newness and fresh vigour. But what's more? Let's appraise a reinvigorated squad. The Australian...