India team is currently going through a transition phase. After having won the three-match One Day International series by 2-1, they are heading to the three-match Twenty20 series, starting from March 4 at Guwahati.

As Harmanpreet Kaur, the T20 captain has been ruled out due to injury, Smriti Mandhana is going to debut as the captain in the International circuit and the controversy which has been going around Mithali Raj for quite some time now is known to all.

However, this series will witness three new faces in the circuit; who have earned their maiden-call up. Harleen Deol, who made her debut against England in February, has got hear maiden call-up for the Twenty20 series along with Bharti Fulmali and Komal Zanzad – the two Vidarbha players.

How many of you have seen a left-arm pacer in women’s cricket? It’s rare, isn’t it? But Komal Zanzad is that kind of a pacer, you just can’t ignore her calibre. Zanzad, who has been in an astonishing form, has been selected in the squad. As she is going to make her international debut, she will be the first left-arm seamer in their 45-year long cricketing journey.

A regular member in the Vidarbha team in the domestic side, Zanzad had taken 9 for 8 for her side against Haryana in December 2017 which is the best figures in the List A cricket so far in Women’s Cricket.

“It’s been amazing,” said Zanzad to Caught At Point. “It was the dream day for me.”

She was a part of India Red in the Challenger Trophy in January this year where she bagged 6-wickets in three matches. However, that was not the first time that she came into limelight. Her brilliant performance earned her a place in the India A side which played against England in the warm-up game under Smriti Mandhana’s leadership.

She scalped three wickets to reduce England to 11 for 4 while playing for Board President’s XI in the warm-up game at the Wankhede Stadium in Mumbai last month.

Zanzad bowled six overs in her first spell for where she picked up Tammy Beaumont, Sarah Taylor and Natalie Sciver, and finished with an impressive spell of 7-3-14-3.

Cricket is considered to be a batsman’s game, isn’t it?

But Zanzad chose to be a bowler, following her idol Zaheer Khan.

“At first I started as a bowler but I tried batting too. I found that I was happier with the bowling only. So, I continued that only.”

“Playing a lot of matches – be it practice matches or domestic games throughout this season and previous season helped me (to perform well),” she said while asking about the reason behind her consistency.

“We did really well under Anju ma’am. Ma’am really helped us to maintain things whether they are related to discipline or related to skill. She always told us the importance of the things.”

Zanzad got the chance to play under Smriti Mandhana in the warm-up game against England. “It was an amazing experience. She is an amazing person and captain as well.”

Zanzad has the ability to take wickets with the new ball and India captain Smriti Mandhana will surely want her to be in the team. If she gets the chance, it will be interesting to see how England batters will handle her pace.

Along with her, the other player from Vidarbha who has been named in the squad is Bharti Fulmali. Having started from gully cricket at an early age, Fulmali made her domestic debut at the age of 14.

Though she was dropped in the very next year, her determination and hard work brought her back in the squad after one year and became the second highest run-getter for her side.

“I had made my debut for Vidarbha U-19 squad at 14 but I was dropped in the next year. That one year I worked really hard and came back as a top-order batter and became the second highest run-getter after Mona Meshram. I scored my first half-century against Hyderabad in U19 All India Tournament.”

After that, she didn’t have to look back. She got the chance in the senior T20 team in 2012. Two years later, she made her debut in the senior One-Day team and from then only, she has been representing her state in the domestic circuit.

She even scored her first century against Rajasthan in the U23 One Day League in 2016 which made her more responsible as a player and that made her believe that she can hit big also.

“U-23 league was first introduced in 2016 and I was named the captain of the Vidarbha team. Due to that, the responsibility became double- as a batter and as a captain. I scored my first 100 against Rajasthan and that gave me the confidence of playing a big inning.”

However, she too praised about the coach, Anju Jain; who was with the team last season and currently she is the Head Coach of Bangladesh Women’s Cricket Team.

Anju Jain’s contribution to the team and the players are certainly visible. Fulmali, who earlier got selected in the Challengers Trophy but couldn’t perform well. This year she got bounced back, scored 293 runs in 8 matches including 3 fifties.

Mandhana led Board President’s XI though lost to England, gave a tough fight. Fulmali was so excited to don the blue jersey.

“I was so excited to play my first game against an International side and to wear the blue jersey. I enjoyed batting against England.”

Meanwhile, she didn’t forget to mention her aim. “I will try to contribute in the middle-order and we will try to win the series as well.”

However, Vidarbha Cricket Association has been doing a great work over the years. Along with men’s, women’s cricket too has been in a good form. Earlier, Mona Meshram (now with Railways) who made her International debut in 2012, used to play for Vidarbha.

Currently, India is trying to sort out their batting order for the upcoming ICC World T20 next year. As Harmanpreet Kaur is injured, Bharti Fulmali can be a strong contender in the middle order. What’s say? 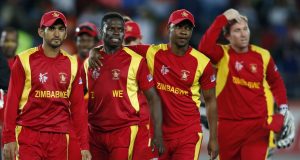 Who’s At Fault As Zimbabwean Cricket Finds Itself In All Sorts...