South African cricket continues to be an enigma that it’s always been. It arrests your attention for fluent feats just as much as it dissuades it for reasons that are implicitly complex in the structuring of its sport and should we say, selection too?

The latest casualty to Kolpak in theProteass ranks has been Duanne Olivier. A young rising proteas fast bowler who had a break-through season against the Pakistanis this summer as the highest wicket taker. The enforcer as he was called by his captain decided to go Kolpak to safe-guard his financial interest with the ever-growing pound and the ever-diminishing rand. Kolpak is a plague that continues to engulf the proteas and as per the legendary fast bowler Morne Morkel it will see a further outgoing of more proteas in the near future.

South Africa has lost almost 42 players since 2004 that saw the inception of Kolpak with the first player being Claude Henderson who is now the spin coach of the proteas.

Let’s take a look at a possible Kolpak 11 that can easily give the proteas a run for their money against any cricket playing country.

The proteas opening batsman in the England tour of 2017. Heino has been a regular scorer for the domestic franchise Titans and took a kolpak deal immediately after the England tour when the selectors didn’t see a future for him in the national set-up.

Richard Levi – the hard-hitting T-20 batter. After the New Zealand series at the onset of this decade, this blaster was not to be seen in the proteas unit and took up a Kolpak deal.

The once promising talent in the Proteas ranks had his fair share of game time with the proteas from 2010 to 2013 till a lucrative deal came from Glamorgan that made him go Kolpak.

He is one of the rather more famous names to go Kolpak recently. A dogged talent with a flair for sledgehammering the white-ball, Rossow’s finest ODI moment, if it could be said came in the form of a 115-ball-128 against the Windies in 2015. This was a knock that featured cold-blooded hitting including 11 fours and 2 sixes.

But it also happened to be a knock that was shadowed by a postcard of quintessential AB de Villiers carnage. Who can forget the 44-ball-149? Jason Holder, have you?

The destructive south-paw who again weighed on financial security more than the national pride is perhaps a huge loss to the national set-up.

A very good middle order batsman, who was asked to open in the away series against India. Going out of his natural position, he couldn’t cope with the low and slow-paced surfaces in India and the uncertainty hence in the national set-up resulted in him going Kolpak.

A good keeper batsman couldn’t get enough opportunities in theProteass line-up because of the ever-present Quinton de Kock. He played some tests against India and England before going the Kolpak road.

The effervescent Protea all-rounder. A very good talent who was not given a consistent run resulting in him deciding to ply his trade in England.

An off-spinner who could have been one of the best the Proteas had ever seen, now is the highest wicket-taker in the English domestic season. Again, the lack of opportunities in the national set-up made him consider otherwise.

The world knows this line and length bowler who has done wonderfully well for the Proteas. He was involved in the 2015 world-cup semi-final controversy where skin colour played a role in him getting dropped for Vernon Philander. Wonder if the thought to go Kolpak for him started from there?

Big ‘Morne’, the ‘Gentle Giant’, above all, a legend who always bowled his heart out for South Africa, Morne is a man beyond words who’s done enough in the South African set-up and that is where things turned. Right at the dawn of his career, Morne decided to go the Kolpak way.

After all, a future had to be secured. Wish this could be a way of life for all protea talent to play for national pride in their prime.

A budding flower about to blossom but hey, when will it? For now, Olivier has decided to show the English county circuit his blossoming talent. One wonders whether this is a loss that will hurt the Proteas for quite some time in the Test set-up.

So here are the 11 which possibly would have spoken wonders for the Proteas if they decided to stay put in the tip of Africa.

Wonder if its only monies or skin colour and quotas that also play an equally big role in the decision.

Let’s just hope Cricket South Africa can work something out to keep the young talent in the country else god only help a side that’s a wonder for the sport. 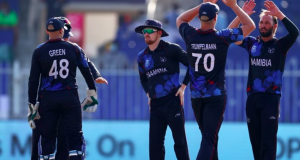 Why Tomorrow Belongs To Namibia, Who Are Playing Bold Today?

Abhishek Srivastava - November 5, 2021
0
October 22, 2021 was an emotional night for Namibian fans, the cricket team, an unknown entity for international...