From personal cricket ground to put on the blue jersey and again back to square one, youngster Priya Punia’s journey is no less than a roller coaster. Priya Punia, who got her maiden call up in the T20I team during the New Zealand tour, has been dropped right after the series. But she came back strongly and became the highest run-getter in the Senior Women’s T20 League.

However, the journey started at an early age with badminton, later Priya shifted to cricket. Priya Punia’s father Surinder Punia has a transferrable job and because of that, the family has to travel to different cities. Though Surinder Punia wanted to play cricket, he couldn’t fulfil his dream of playing at a professional level. He used to play cricket for the university and badminton for the state level and always wanted his children to play cricket at a higher level.

Priya took admission in the West Delhi Cricket Academy in Paschim Vihar under Rajkumar Sharma; who was the coach of Virat Kohli, the India captain. While talking to Caught At Point, Priya Punia revealed her coach used to taught her to “leave the outside off stump deliveries and how to steady an inning”. Currently, they have moved to Jaipur but Priya Punia plays for Delhi.

Having felt lucky to get a family like this, Priya shared, “My family has supported throughout. Where I am today because of my family. People don’t allow their daughters much into sports here (Jaipur) but my family has always given me freedom.” Just because Priya’s practice doesn’t get hamper, Surinder Punia used his savings and made a cricket ground with a turf pitch so that she could practice in the off-season as well.

However, she came into the limelight in 2015 when she was playing for India A against New Zealand. On the back of a strong 2014-15 domestic season, she got the chance in the India A team. Came to bat at one down in a chase of 257, she scored 42 off 59.

“I always open the inning but on that day I was told to go at one down. One of the openers got out on a duck and I went to bat; which was similar to open the inning for me. I scored 42 there and that is a special one,” she added.

Priya shared how Mithali Raj guided her during the Senior Women’s One Day Challenger Trophy last year. She had a rather slow knock of 51 in the first game for India Red. She was hardly able to rotate the strike there. However, guidance from the senior like Mithali Raj, helped her to overcome the situation.

“You will never understand how Mithali Di (Mithali Raj) scores. She is so accurate in finding gaps and even her lofted shots are always a matter of time, not only strength. She told me to work on lofted shots, tap shots, strike rotate and soft hits because earlier I used afraid of lofted shots. Later, I worked on it and already started hitting.”

After the series, Priya worked on her fitness, shot selection, lofted shots and came back in a new form in the Senior Women’s One Day League in December last year. She scored more than 400 runs with a strike rate of 75.51, including two centuries – 125 against Gujarat with the strike-rate of 81.70 and 143 against Tamil Nadu with the strike-rate of 92.86. Though Delhi wasn’t able to qualify for the knockout, Priya’s knocks impressed everyone.

Her hard work and her family’s support paid off when she earned her maiden call up on December 21 last year in the T20I team for the New Zealand Tour earlier this year.

But, everything doesn’t go according to our wish. There are certain things which gradually evolve. The same thing happened with Priya. She had a rather forgettable tour in New Zealand, scoring 9 runs in 3 matches.

She has been dropped from the squad for their next series against England at home.

“I was in a good form before going to NewZealand and was very much determined but I think I went a little nervous. I could have given more time to myself on the crease, but sometimes the things don’t go according to our wish,” Priya expressed while talking about her first International tour which could be a memorable one.

Who wouldn’t get disappointed after getting a chance to don the blue jersey and being dropped from the squad right after the series?

Priya Punia was also disappointed and that was obvious.

“I was disappointed as I couldn’t make my place in the squad for the England tour of India. But I couldn’t afford to lose my focus for this as I had to play well in the Senior T20,” told Punia.

Yes, she didn’t lose hope and once again came back with a bang. She scored 382 runs in 10 matches with a strike rate of 101.86 in the Senior Women’s T20 League and became the highest run-getter of the tournament.

“I told to myself that if I give more time at the crease, runs will come easily and I just stick to that plan. I am happy that the plan worked and I performed well.”

Her performance definitely showcased her talent and determination.

She scored 351 runs in 10 matches, including a half-century in the recently concluded Under-23 One Day League and all set to play for India Green in the Under 23 One Day Challenger Trophy; which is scheduled to start from April 20 at Ranchi.

Believer of hard work, Priya hopes to play for India again. “Right now I am focusing more on my performance because I know, if I perform well, I will get another chance.” 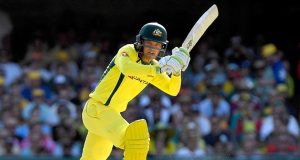 Are We Paying Enough Attention To Alex Carey As Lovers Of...

Navid Khan - March 7, 2020
0
Ever heard of the phrase “seeing both sides of a coin”? If you haven’t, citing the example of the budding years of Alex Carey might...