Just a year ago, KL Rahul was being perceived as the next big thing in Indian cricket. A run tally of 659 runs at a splendor batting average of 54.92 in the IPL. The lanky right-handed batsman had paved way for better opportunities with his successful IPL stint. Rahul began the England tour in emphatic fashion with a fascinating knock of 101 of 54. He ended the England tour with a stupendous 149. There really are times when using cosmological adjectives become an unsaid rule of sorts. And that particular knock warrants the use of the phrase.

However, in between both the innings, Rahul went 13 innings without a single fifty.

You don’t find a talent like Rahul every now and then; someone who can adapt according to the situation. A top order batsman who can take heads onto the opposition bowlers from the very first ball. Or sometimes bat with intent to make sure the team reaches the finishing mark. Either way, Rahul is a fascinating prodigy to possess.

Often there have been significant questions raised on Rahul not being given a long run.

However, if the past year is something to go by, KL Rahul has spilled innumerable chances to make a strong case for himself in the Indian side, be it any format. And it’s not that he hasn’t worked hard. After the failures in Australia, he would be often seen hitting the practice nets right after his short stints at the crease.

The curious case of Rahul‘s inconsistency can be easily compared to the Starks in Game of Thrones. The merrier the highs, uglier the downfall. While he can steal the attraction with some of the most atrocious cricketing shots, his inconsistency with the bat has a knack of frustrating even the most patient ones.

After a dull start in the ongoing IPL, KL Rahul struggled at the beginning against the Mumbai Indians. However, after spending ample time at the crease, Rahul seemed to have regained his lost mojo back. The lanky opener steered the Kings XI Punjab to victory in what was a crucial encounter.

However, Rahul’s problem hasn’t been about registering a big score. There have been numerous occasions where Rahul has stood tall for India. However, the uniformity doesn’t seem to exist for the 26-year-old. After a good score, he fails to keep up with his solidity and sometimes, even ends up throwing away his wicket, trying to be innovative.

It’s not that the Karnataka batsman hasn’t shown any fighting spirit at the crease. But he surely oscillates between trying too hard to being quite lenient in the middle. Another aspect of Rahul’s batting is that if he manages to stay at the crease for long, he rises up to the occasion. It has either been a string of low scores or big ones for him.

A classic example of the same can be attributed to this year’s IPL. Scores of 4, 1, 71*, 15 and 55 just go on to suggest that his longevity with the bat is based upon his initial stint at the crease. Once the 26-year-old lays the platform at the start of his innings, it becomes really difficult to stop him. Something he needs to work upon if he has to go a long way.

Even as the 15-member squad’s been announced and KL Rahul finds himself there, here’s something hey may want to introspect a bit.

His arch nemesis for the no.4 spot-  Vijay Shankar and Dinesh Karthik- all have done better than him.

So the question isn’t whether KL Rahul can score runs and reduce opponents to a battered pile of a turkey sandwich. The point is, that Rahul must; for not only is this his first World Cup appearance. It’s a World Cup for Jesus H. Christ’s sake!

Nothing is worse than missing an opportunity that could have changed your life. 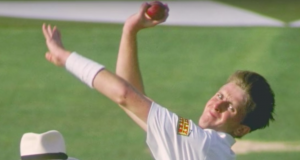 Abhishek Srivastava - August 31, 2017
0
As Edgbaston basks in the history for hosting the first-ever Day Night Cricket Test in England, we turn over the history books between England...