Almost exactly a year back, Australian cricket was in shambles. The ball-tampering saga had blown up at the face of every Australian cricket fan and the country’s two best batsmen – Steve Smith and David Warner – were handed one-year bans for their involvement in the episode.

Much has already been written and discussed that saga by now from every corner of the globe. But what followed in its aftermath was felt the most by Australian cricket fans – the ones who take great pride in their cricket. Australian cricket plummeted to its lowest abyss back then as the team lost one series after the other across formats.

After the South African tour, where this ball-tampering saga exploded, Australia suffered Test series defeats to Pakistan in UAE and at home against India. They were worse in ODI cricket, losing 0-5 to England in England, followed by 2-1 defeats to South Africa and India at home. The two new captains – Tim Paine in Tests and Aaron Finch in ODIs – tried hard to put the ugly saga behind them and set a new team culture. But the loss of Smith and Warner hung around like a ghost, refusing to let go.

After their demoralizing loss in Tests and ODIs to India at home earlier this year, it looked as if Australia had sunk to their lowest. Their batting looked listless and lacked depth. And the bowling, despite some fine performers, was inconsistent.

It felt like it would take something special for them to arrest this dramatic fall.

Cut to three months later and Australia are now being considered strong contenders for the ICC World Cup in England with some good recent ODI form behind their backs and a robust squad that has seen the return of David Warner and Steve Smith.

So what has changed so drastically for Australia in such a short time?

Getting back to winning ways

After the end of the Border-Gavaskar series at home, Australia traveled to Sri Lanka for a two-Test series that they won 2-0, courtesy some fine performances by Travis Head, Pat Cummins, and Mitchell Starc.

For a team that was desperately struggling for a solitary victory, this series win came as a huge confidence booster. While a victory against a downtrodden Sri Lanka was good, what followed was quite spectacular. The Aaron Finch-led side won back-to-back ODI series in Asia, triumphing historically over India in India and then brushing aside Pakistan 5-0 in UAE.

It was a pivotal moment for Australian cricket, as the shattered pieces from a year back now seemed to be falling back in place. Suddenly Australian supporters had found the thing they had been dearly missing for close to a year: hope.

Architects of the Turnaround

Well, there are many. So let’s begin.

Usman Khawaja, with 769 runs in 13 ODIs in 2019 at an average of 59.15 has been really consistent and fluent at the top and Aaron Finch, overcoming his poor form, has collected 634 runs in 13 matches at 52.13 in this year. Both of these have done the bulk of scoring for Australia in the past three months and have set up games for the team.

Glen Maxwell (458 runs in 13 matches) has shown surprising maturity in the middle order, Shaun Marsh (435 runs in 11 matches) is being consistent finally and Peter Handscomb (479 runs in 13 ODIs) has made a strong impact, including a superb maiden one-day hundred earlier in the year and accumulating runs briskly in the middle overs for the team.

Australia’s ODI bowling unit has blossomed tremendously in 2019, despite Mitchell Starc missing out on action all year. Leg-spinner Adam Zampa has come onto his own and is the leading wicket-taker for Australia in 2019 with 18 wickets in 11 ODIs. He has been the surprise package for Australia and is choking batsmen in the middle overs with his guile and varieties.

Pat Cummins has been sensational, snaring 17 wickets in just 6 ODIs this year. Cummins has been sharp and accurate and is bowling his heart out at the moment. Following him closely is the young and highly impressive seamer Jhye Richardson who has captured 17 wickets in 8 ODIs in 2019. The lanky pacer has very effective with his swing and seam and might be a genuine prospect in England.

Witnessing Australia’s rise this year has been fascinating. They have been pushed back, beaten and bruised. But they kept fighting. Kept landing some punches every now and then. And eventually, they have found a way to stand up and are hitting it back hard now.

What’s heartening is that they are displaying a brand of cricket they are renowned for – hard-fought, ruthless and fearless.

World cricket desperately needed Australia to be back in form. And with the World Cup right around the corner, a rising Australia is great news for the event.

Are Australia Strong contenders for the World Cup?

While it has been great to see Australian cricket return to some form, does it mean that they are back to their best? And, more importantly, can they be considered as a serious contender for defending their World Cup crown in England?

We shall get answers to those questions in a couple of month’s time. For now, the selectors, entrusted with the task of resurrecting Australian cricket have, at least on paper, put down a solid squad.

This, of course, is barring some surprise omissions.

With some experienced stars like Steve Smith, David Warner and Mitchell Starc returning to the fray, this Australian unit looks like the one to beat.

Here is a look at the Australian Cricket World Cup squad:

David Warner has shown exemplary form in the ongoing Indian Premier League. Steve Smith appears to be getting in good shape as well. Captain Aaron Finch, after months of struggle, has found form at the right time and so has Glen Maxwell. Finch also has a lethal bowling unit at his disposal which is in wicket-taking form and which will be heavily bolstered with the return of Starc.

All this augurs well for Australia’s chances at the World Cup. How they perform in the event remains to be seen. If they, however, come close to defending their crown, that will be a story – of a tumultuous fall and a remarkable rise – to talk about for years. And, most importantly, it would go and a long way in putting Australian cricket right back on track and mending the broken hearts of the country’s loyal fans who have stuck with them all the way through. 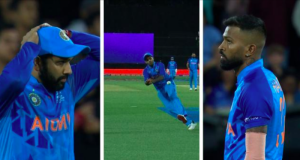