I was doing my third- year Engineering when Darren Bravo made his debut. I was the lone supporter in my hostel for West Indies Cricket Team. When I first saw Darren Bravo on TV in my Hostel TV Room, I was like “Oh, my god, he was the reincarnation of Lord Lara”. It was against India and I believe he has scored 20 runs in that match. I was very happy. The stance, the looks, the batting style, the shots everything resembled Brian Lara. And more importantly, they were related to each other- cousins.

After a year, Darren Bravo made his debut in Test cricket against Sri Lanka, the match in which the “Universe Boss” made 333 in Galle. He was well supported by Darren Bravo who scored a patient Half century. I thought this guy is going to be a superstar like his idol. In the year 2011, against Bangladesh, Darren Bravo scored a brilliant 195. I was watching the match on some live streaming website. I remember that day where I was calling another West Indian (Lara) Fan, Vijay Shanmugam. We were discussing each and every ball. I was not assigned any project at that time in my first company and hence I don’t have much work. I came home early to watch the match. We were like, “Is he going to name his first kid, Mirpur?” like his idol. But he didn’t score a double.

During the 2011 WC, Darren Bravo made an excellent fifty against South Africa. It increased my interest to watch a game in the stadium. Fortunately, I got Tickets for India vs West Indies match. Usual Caribbean collapse for the boys, but for me, it’s 100% paisa-vasool (worth the penny). It is only because of the following delivery:

“Over 12.4 – Ashwin to Bravo, SIX runs, Lara is batting in Chennai! The swagger, the backlift, the clean strike, the follow through, the finish. Bravo leans out to a flighted offie and slams it through the line well over long off.” – Commentary from Cricinfo

Apparently, it was my first match in the Stadium. It was even more thrilling. I was sitting in the E- Stand; when that shot played, I was standing behind the mid-wicket. While writing this article, I could clearly visualize the trajectory of the ball. I didn’t see Lara bat in the stadium.

But I saw Darren Bravo. I was very happy about that.

In the subcontinent, he batted exceptionally well. Be it against India, Bangladesh, Sri Lanka, he played with exceptional grit and maturity. Unlike his idol, who has never scored a century in India, Darren made an instant impact against India. He scored 167 in Kolkata in losing cause. He showed the world that he is going to be the next superstar. In the same time, Virat Kohli was predicted to be the Next “Sachin” and Darren as next “Lara”. If I am not wrong, the stats of Brian Lara and Darren Bravo almost similar after 12 Tests. There were talks like it’s going to be “Virat vs Bravo” from now on.

After a few years, Darren made a great knock against New Zealand. A classic Double century. He batted for more than 5 sessions to save the test match. The true fighting nature like his idol. I could equate that innings to Lara’s 120 against India in St. Lucia where Lara took 307 balls to score that runs with just 10 fours. It was uncharacteristic Brian Lara Innings. But he saved the match. Darren exactly reproduced similar kind of innings. In fact, he scored a double. West Indies saved the match, courtesy Darren Bravo and Rain.

I am not a big fan of comparing players. But the article is demanding me to write the similarities and dissimilarities between cousins. To me the very major difference between Brian Lara and Darren Bravo is:

“When Lara settled and crossed the high 30s, the upcoming balls would read

When Darren settled and crossed the high 30s, the upcoming balls would read

You can always see the scoreboard moving when the prince was in the crease and settled. But you can’t expect the same with Darren Bravo. I am not criticizing his style. Everybody can choose their own style and scoring pattern. Lara inflicted fear-factor to the bowlers. Darren is not inflicting. Even though both the players are “treat-to-watch”. The treat-to-watch factor is far more consistent for Lara than Darren Bravo.

No one can match Brian Lara’s elegance. The cover drive, the pull, the straight Drive, the Hook, the square cut, Brian Lara can play every shot in the book against any quality attack in any condition. The final thing is Lara gave Hope to all the fans that there is a chance even though the chance was very slim. I believe no other player would have given the same to their fans.

Nowadays people have started comparing Hetymer with Lara. Let that young kid play. Don’t ruin his career and put additional expectation. Lara is one of a kind. There is only one Brian Lara and he has retired, even though not from the memories. 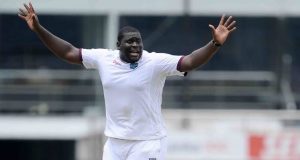 Why Rahkeem Cornwall Is Here To Stay?

Dev Tyagi - November 27, 2019
0
The opening day of the one-off Test between the West Indies and Afghanistan belonged to Jason Holder’s team. Winning the toss and putting Afghanistan into...