To be Virat Kohli today is to be the world’s best batsman at present and the expectation that it brings to lift a cup the entire world is after. But to be Ambati Rayudu today means bearing the extra kilos of despair despite years of fighting back and proving one’s mettle. It also then in some ways points to an ambitious cricketing journey that one embarked on with much gusto, only for the car to break down somewhere in the middle of the run.

The verdict is out there and there seems nothing in it for Ambati Rayudu, a man responsible for 1700 ODI runs at a very healthy average of 47.

This includes 4 fighting hundreds and an overall strike-rate of nearly 80, something that honest ODI efforts are made of and something that would’ve been India’s numero uno requirement at the ICC 2019 World Cup, especially at the middle-order.

A few days back, the probable prospect for the much required and much-desired number 4 position- Ambati Rayudu- was left out from the 15 man World Cup squad.

His omission drew much flak from former cricketers and pundits who were of the opinion that no fixed candidate has been picked for the most debatable number 4 spot, a pain point that the team has been trying to resolve for quite a while now.

Vijay Shankar, who got picked in place of Ambati Rayudu will now bat at 4, as revealed by the chairman of selectors MSK Prasad.

The fickle nature of a sport can make for good reading if you are not involved in it but can get your nerves jangling if it concerns you.

Ambati Rayudu seemed like a sure-shot bet in the World Cup squad a couple of months ago, with even Virat Kohli giving his vote of confidence to the Hyderabad player to play at number 4 in the World Cup team let alone not even being there in the squad of 15.

But then the professional sport demands you to perform consistently or else there’s no shortage of nominees among batsmen in the country waiting to grab the opportunity like a hawk.

Ambati Rayudu was selected to play for India last year on the England tour but couldn’t join the team after failing the Yo-Yo Test.

After making a comeback to the team during Asia cup last September, Rayudu has featured in a total of 21 ODI’s for the country scoring 639 runs at an average of 42.60 with 4 fifties and lone hundred.

So do these stats suggest the selectors have unfairly treated Rayudu, although there’s a scope for scratching a little further?

The past few months Rayudu’s performance hasn’t set the world on fire, something you didn’t expect in the least from a player that was such a natural fit for the World Cup.

In case, one wondered about Ambati Rayudu’s recent form then here’s some telling statistic.

While Rayudu’s returns on the field were below expectations, Vijay Shankar arose like a phoenix out of thin air, impressing instantly.

You can call this a simple case of “You miss, I hit” for there’s nothing else that could define Ambati Rayudu’s predicament.

Moreover, looking at Shankar, you can sense what plays naturally into his hands. His medium pace bowling and good fielding were the added benefits – something that Rayudu lacks.

Shankar has shown in the limited opportunities he has got that he can solidify the innings along with hitting the lusty blows, if and when the situation requires.

Also, his ability with the ball was at the full display when he defended 8 runs against the Aussies not so long ago.

No doubt, it will be a challenge for the Tamil Nadu player to fill the Achilles heels of a position of number 4.

For this is what the Indian team needs at this time. Also, it would be a great opportunity for Shankar to cement his position in here at the middle order, a spot one can’t help but think with a scratchy head- once belonged to Ambati Rayudu.

A strong showing in the World Cup could well give wings to the beginning of a long and fruitful journey in India colors. But beyond all the conjecture, guesswork and hope, doesn’t one feel sorry for Ambati Raydu- a batsman with immense self-drive if not the best natural talent or strongest survival instincts? 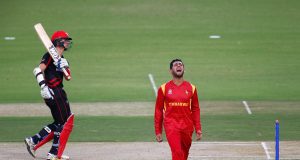 Why Sikandar Raza Holds The Key For Zimbabwe’s Fightback?

Abhishek Srivastava - June 24, 2017
0
Life, it’s said, is what happens to you when you are busy making other plans. Had that not been the case then Sikandar Raza, from...