The squads for the ICC World Cup 2019 in England have now been announced by all the ten participating teams. While there have been quite a few surprise additions in almost all the squads, some notable and startling omissions have become the talking points.
It is almost impossible to pick a squad that will please all and sundry. But some names from the list of the omitted are worth discussing over – because these were players that star in their own right and could have played a huge role at the World Cup had they been selected. Here we look at some of those names that were unfortunate to have been overlooked for the ICC World Cup 2019.

Jofra Archer is yet to play a game for England. But no other uncapped player, perhaps, in recent times has generated so much interest and excitement. The Barbados-born bowling all-rounder has impressed in his short domestic career thus far. Archer has that rare ability to bowl at a furious pace – almost consistently over 145 clicks per hour – while maintaining remarkable control of his lengths.

His yorkers are the hardest to handle and he has some great variations to upset the batsman’s rhythm.

making him a fast bowler to watch out for.

With 131 wickets in 28 First-Class matches, Archer has shown that he is not just a T20 wonder and can excel across formats, provided someone picked a rising talent early in his career- which wasn’t to be.

His ability to use the long handle and produce some attractive cameos down the order makes him a potent bowling all-rounder – Archer averages 31.34 with the bat in First-Class cricket.

It is hence surprising that England didn’t consider Jofra Archer for the World Cup. Given that their bowling unit isn’t exactly the strongest an in-form Archer would have certainly bolstered it.

He averages 43.54 in 13 ODIs in 2019 and has even hit his maiden ODI ton against India at Mohali earlier in the year.

Peter Handscomb has not set a foot wrong this year and has been one of the prime architects of Australia’s turnaround in the fifty-over format.

Handscomb’s ability to play well against spin and rotate the strike smartly made him a steady presence in the middle order.

Add his wicket-keeping skills to the list and it makes him the perfect multi-utility ODI cricketer. So what went wrong with Handscomb? The obvious answer is the return of Steve Smith and David Warner to the mix. Smith is likely to bat at No. 4, behind Warner, Aaron Finch, and Usman Khawaja.

But there is no denying that he would be feeling low.

With 146 ODIs and 3599 runs, Dinesh Chandimal is one of the most experienced and successful Sri Lankan ODI batsmen of the current era.

Chandimal, who debuted in 2010, has been one of the few bright spots for Sri Lanka in the past couple of years, which saw them plummet to their lowest.

In 2018, Chandimal averaged 42.57 and he has a pretty neat record in England – an average of 33.46 with 1 hundred and 5 fifties in 16 innings. While his form has been a tad inconsistent in 2019, for a batting order that is still brittle and inexperienced, Chandimal’s presence could have made a difference. That’s especially in a big tournament like the ICC World Cup 2019.

Mohammad Rizwan’s exclusion from Pakistan’s World Cup squad was quite a surprise. Firstly, Pakistan now head into the big event minus an option of a back-up wicketkeeper.

And secondly, because the 26-year-old wicket-keeper batsman has had a fantastic 2019 – 2 hundreds, both against Australia, in 6 ODI innings at an average of 49 and a strike rate of close to 90.

Rizwan, in fact, has been superb ever since his return to the national side in 2017 and has been a steady performer. In Pakistan’s 0-5 surrender to Australia earlier this year, Mohammad Rizwan’s fluent batting in the middle-order was one of the few highlights for the team.

“No Rishabh Pant in the World Cup Squad … India must be bonkers!!!!!” – the tweet from former England captain Michael Vaughan illustrated how impactful a decision it was to omit the talented Rishabh Pant from India’s ICC World Cup 2019 squad.

The 21-year-old wicket-keeper batsman has been hailed as the next big thing in Indian cricket and is almost certain to take over the baton from MS Dhoni post the veteran’s retirement.

Pant is aggressive, a powerful striker and offers a range of strokes to attack his opponents.

He has that X-Factor that many believed would give India the edge at the ICC World Cup 2019.

However, the selectors chose to go with the experience of Dinesh Karthik in his place.

While many Indian fans along with former cricketers have expressed their discontent at this decision, it is not altogether flawed. Pant has displayed a proclivity to play erratic and reckless shots under tense situations which cost his team dearly many a time. The youngster will get his chance again and hopefully by then he would have matured as a batsman.

Perhaps the most surprising omission from Sri Lanka’s squad for ICC World Cup 2019 is that of Niroshan Dickwella. The spunky wicket-keeper batsman has been one of Sri Lanka cricket’s shining points in their recent descend.

In his last 15 innings, Dickwella has gathered 497 runs and has been the country’s second most prolific batsman in ODIs over the last year with four half-centuries. Another feature of Dickwella’s batting is his ability to score quickly – his strike-rate is a terrific 97.83 in the last twelve months.

What’s more is that the last time Dickwella was in England – for the ICC Champions Trophy 2017 – he had done quite well, scoring at an average of 40.33. Dickwella has an experience of five years in the format and could have a valuable asset to the team at the big event. But it appears that he paid a price for the team’s poor run in 2019.

If Australia end up being hammered- somehow- given they’ve got Smith and Warner up where they belong, a question may excite their naysayers:

Why wasn’t Josh Hazlewood in England?

Josh Hazlewood is the perfect seam bowler to have in English conditions. He can swing the ball both ways, extracts good bounce and has remarkable control.

He has done well in ODIs in England, picking up 10 wickets in 5 games at a terrific average of 18.90.

He has been touted as the next Glen McGrath for a while now for his feats in Test cricket and a smooth action which is reminiscent of the great Australian bowler.

And that’s for two reasons, basically.

Hazlewood has been on the sidelines since January 2019 due to injury.

And even though the bowler was confident of making himself fit for the tournament, the selectors decided to tread with caution and preserve him for the Ashes series which will immediately follow the World Cup.

Seeing as how crucial Hazlewood will be for Australia’s chances in that grueling 5-Test series and how the Australian squad is currently teeming with talented fast bowlers, his omission is understandable.

But it will still be a bitter pill to swallow for the man who played a crucial part in Australia’s last World Cup triumph at home. 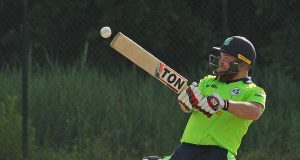 With The Ordinary ODI Outing Behind Him, Paul Stirling Is Back...