For the last 10 years, Marizanne Kapp has served the South African women’s cricket team effectively with her all-around skill. Primarily an opening bowler Kapp also has contributed with some key performances with the bat over the years. During the last Pakistan series, she became only the third South African woman cricketer after Mignon du Preez and Trisha Chetty to play the 100th ODI for her country.

Kapp started her international career in 2009 in an ICC women’s World Cup game against Southern Stars, the Australian team. It was not a great beginning as South Africa lost and Kapp failed to create an impact with both bat and ball.

After playing only a handful of T20 matches, Marizanne Kapp gradually became a regular member of the national team during the ICC Women’s Cricket Challenge played at home. She did not get a wicket in her first seven ODIs although she showed enough promise for selectors to keep backing her.

During the Bangladesh tour for a World Cup qualifier and a series against Bangladesh women’s team, she made her mark. Especially in the third ODI Bangladesh Women were bowled out for 60 and Kapp finished with 5-2-5-2.

Then there was no looking back.

Next year she’d registered the first T20 hat-trick by a South African woman. Not a small feat right?

But one wonders whether the effort found its way into tribute pieces and salutations the way one finds the same effort celebrated in the men’s game? And if not, then who’s to be blamed?

Want to know more about Marizanne Kapp, the bowler who can turn into a bludgeoning bat and the batswoman who can hurl seamless variations for her opponents?

Her record of four for six against the same Bangladesh team in a T20 international has remained her best performance with the ball. In the meantime, she also scored an ODI century against Pakistan team during the 2013 World Cup in India and established herself as a key member for the national team.

That innings of 102* made her the record holder for the highest South African scorer in Women’s World Cup. Her partnership of 128 runs with Dane van Niekerk is also the highest partnership for Proteas Women in World Cup. Her best ODI bowling performance came in the next World Cup in 2017 at Leicester as her four for 14 and skipper Dane van Niekerk’s four for zero bundled out the West Indians for just 48.

Till now, Marizanne Kapp has taken 114 wickets in 102 ODI matches with three 4-wicket hauls and scored 1,724 runs with one century and seven fifties. For T20 internationals the numbers read as 54 wickets and 791 runs. She also played her solitary test match in 2014 against India where she scored 0 and 19 and failed to take any wicket and her team suffered an innings loss.

In July 2018, Kapp and Van Niekerk got married and became the second international teammates to get married after Amy Satterthwaite and Lea Tahuhu of New Zealand. Interestingly, during the ICC Women’s World T20 in West Indies later in the year, they made history as the first couple to bat together in a major ICC tournament.

Kapp was excited to play the 100th ODI for her national team and called it a massive honor and privilege and also highlighted the growth of women’s cricket in the last decade. She and Van Niekerk could play their 100th ODI together but a fracture of the right femur kept Proteas captain out of the action.

Kapp has created a legacy for women’s cricket in South Africa and globally. In 2017 she was named as one of the players in ICC Women’s ODI team of the year. She was among the initial South African women to be signed by Big Bash franchise. During her growing up years, she idolized the great Proteas all-rounder Jacques Kallis and from where one sees- the exultations upon celebrating a wicket, the fuming rage on delivering a poor ball and, the rare but infectious smile that lightens up the rainbow nation upon a triumph- ‘Kappy’ is in a league of her own. Is she not?

The records made by her so far, in a team that has no dearth of legends like Mignon Du Preez, it won’t be an exaggeration to mention that the next generation of cricketers in South Africa has Marizanne Kapp along with other South A 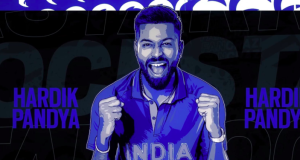 Hardik Pandya- From Being On The Stretcher To Bowling @ 145...

Saksham Chugh - September 8, 2022
0
The Indian team has always been grateful to have all-rounders like Kapil Dev, Mohinder Amarnath, Yuvraj Singh amongst...