Cricket is one of the most popular games all over the world, Pakistan is one of those countries where a first International Cricket match was played on November 22, 1935, between Sindh and Australia in Karachi. But that was men’s game and with time, its growing popularity helped them to get the ICC Test status in 1952.

But, what about Women’s Cricket then?  Did they want to play as well? Probably not, because it was that time when any kind of women’s sport was considered illegal in conservative Pakistan.

How many days can you restrict women from playing sports, 10 years, 20 years, 40 years? But, they certainly know how to do the right things in a proper way.

It was Shaiza and Sharmeen Khan who was first introduced Women’s Cricket in Pakistan in 1996, but as usual, they had to meet with court cases and death threats too as women playing cricket was considered illegal there. The Government also refused them and ruled that they were not allowed to play any sports in public due to the religious issue.

They first tasted the feeling of victory in 2001 against the Netherlands. They won the seven-match One Day International series by 4-3. From that day to today, Pakistan have won several games and proved their ability in every way possible.

Pakistan have produced many famous cricketers with time. Many youngsters are also taking up cricket nowadays. Sana Mir, Asmavia Iqbal, Bismah Maroof, Javeria Khan are among those players who have achieved many milestones in their career. Along with them, there is Diana Baig, who has also stamped her authority in the cricketing world.

Let’s have a look at their best achievements:

160 International matches, 114 wickets, 1343 runs – certainly an achievement in the country like Pakistan, isn’t it?

She’s among to the best Pakistan Women’s cricketers of all time, and it may not be wrong to say, she’s also an under-appreciated talent in the annals of the women’s game.

Though she has 4 three-wicket hauls, her best was 3/15 which was against South Africa in Dhaka in 2011. It was the Semi-Final of the ICC Women’s World Cup Qualifier where her 3-wicket dismantled South Africa’s batting line up. Apart from Mignon du Preez’s 41 and Dane van Niekerk’s 31, there were no notable scores as Pakistan restricted them within 180.

However, Pakistan’s chase too didn’t start smoothly as they lost Sana Mir, Nida Dar and Qanita Jalil within 7 overs. South Africa bowlers made the run chase so difficult that Pakistan were reduced to 140-7 within 42 overs.

Later Marina Iqbal’s 28* and Asmavia Iqbal’s run-a-ball 22 guided them to a 3 wickets win with 13 balls to spare.

In a conservative country like Pakistan where women’s cricket was not at all popular in later 80s, Mir took it as her profession and the 1992 World Cup did the rest.

Sana Mir chose cricket over engineering and proved everytime that her decision was right.

Having taken six four-wicket hauls in International cricket, Mir’s best spell is still 5 for 32; which came against the Netherlands in 2010. The same year she led the team to a gold medal in Asian Games.

Mir’s best spell came for a winning cause, where Pakistan won the toss and chose to bat first. Bismah Maroof’s half-century powered them to 258 in 50 overs.

The Netherlands lost Violet Wattenberg early, but Lanser and captain Helmien Rambaldo added 118 for the second-wicket to put them in a strong position.

Later, Lanser’s dismissal made a collapse as the Netherlands reduced from 146 for 2 to 167 for 6, where Mir took three of the wickets, including two in two balls.

Mir took another wicket of Merijn Nijman and finish with 5 for 32 from her 10 overs.

Isn’t it a great feat?

One of the best batting all-rounders of Pakistan, Bismah Maroof, has smashed more than 4000 international runs in 195 games where her highest score in ODI is 99.

She broke into the national team as a 15-year-old and didn’t take much time to establish herself as a regular in the playing XI. In her 100 ODI matches, she scored the 90s three times but couldn’t convert it to a century yet.

Her 99 came for a winning cause against South Africa in Sharjah, 2015 where Pakistan scored 216 while batting first. Restricting a quality side like South Africa was not easy for Pakistan but the bowlers did the job brilliantly and won the game by 57 runs.

Another all-rounder of Pakistan, who can turn the table single-handedly, is none other than Javeria Khan. Played more than 180 international games where she has scored nearly 4000 runs. Her highest ODI score (133*) came against Sri Lanka in 2015.

Sri Lanka captain A Jayangani’s 109-ball 99 went in vain as Javeria’s unbeaten 133 took the limelight where Pakistan won the game with 2.4 overs to spare. It was her maiden ODI ton which became the catalyst of Pakistan’s run-chase.

Sri Lanka chose to bat first after winning the toss. Their openers A Jayangani and P Weerakkody added 97 runs prior to the latter’s dismissal. Later, Siriwardene produced a 28-ball 39 to guide Sri Lanka to 242.

Pakistan’s chase started with the early loss of the opener Marina Iqbal for 22. After a 65-run second-wicket stand between Bismah Maroof and Javeria Khan lift to 110 before Maroof’s dismissal by Siriwardene; who again struck and picked up Nain Abidi.

With another 125 required in the remaining 144 balls, captain Sana Mir joined Javeria Khan who was set at the other end. Mir struck a half-century in 68 balls, put up an unbeaten 127-run partnership which ended Sri Lanka’s hope of a victory.

Having started as a footballer, Diana Baig made her international debut in cricket in 2015, played only 30 international games so far. She came into limelight during the ICC Women’s World Cup when her inswinger trapped India’s in-form opener Smriti Mandhana in front of the wicket for mere 2. This was her first world cup wicket as well.

However, India managed to win the game, courtesy Ekta Bisht’s 5-wicket haul but Diana Baig was quite impressive and well praised by Ian Bishop, the former West Indies cricketer who was one of the commentators there.

I am sure we can’t forget that nail-biting encounter, can we?

Baig’s best ever spell came against West Indies this year only. Opting to bat first, Pakistan were in trouble when they were 52 for 3 after Nahida Khan, Javeria Khan and captain Bismah Maroof were all departed for single-digit scores.

West Indies’ chase too started with the hiccups as Baig sent back the three top-order batters- Dottin, Kycia Knight and Shemaine Campbelle within 11 overs and West Indies were reduced to 27 for 3.

Later, Baig dismissed Afy Fletcher in the 35th over and completed her 4-wicket haul where Pakistan won by 34 runs. 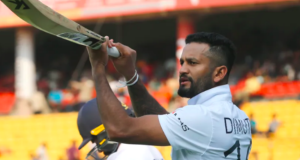 Spare A Thought For Dimuth Karunaratne!

Dev Tyagi - March 14, 2022
0
For as long as the beautiful game of Cricket will endure, there'll perhaps be three kinds of century...