England and World Cups have a strange relationship as they are yet to lay their hands on an ICC World Cup ODI trophy. The team has just one Word Cup silverware in its cabinet and that too, the 2010 T20 World Cup, if that can be considered a World Cup at all.

Other than that, England have returned empty-handed from all their World Cups campaigns, which is quite strange given that the nation actually invented the game.

Many believe that the 2015 World Cup was a turning point in England’s limited-overs cricket.

The English management made wholesale changes and brought in young blood in place of the old school cricketers. England adapted briskly and have now, in a sense, become the flag bearers of the modern game.

But over the course of the several decades, it ought to be said, there’ve been some incredible efforts by the men from Her Majesty’s Kingdom.

So let’s examine some of the best performances by England in the Cricket world cup over all these years:

England were chasing a mammoth target of 339 against the host nation India in the 2011 ODI World Cup. Owing to a ton from Sachin Tendulkar and a breezy half-century from Yuvraj Singh, India were successful in putting up the runs on the board.

Just when it seemed that England might crumble under the pressure of a big match and the scoreboard, English captain Andrew Strauss decided to pull out something special.

Generally an accumulator, Strauss was on to the Indian bowlers from the get go and smashed one boundary after the other. When he was finally dismissed for 158 by Zaheer Khan in the 43rd over, England were 281-4 and well on their way to a win.

The match ultimately ended in a tie but will be remembered for the heroics of Strauss. FYI, his 158 run-knock remains the highest score by any England batsman at the World Cup.

It was the 2007 World Cup and after a loss against Bangladesh, England had no hopes remaining of qualifying to the next round. They were up against West Indies, who were in the same boat as England, in a dead rubber. The match, though, is remembered as the last international game of West Indies captain and legend Brian Lara.

Be that as it may, it was Lara’s counterpart who spoiled his party and led England to a win in Lara’s last ODI.

Batting first, West Indies recovered from 181-4, courtesy of a quick-fire partnership of 77 between Marlon Samuels and Shivnarine Chanderpaul, who took West Indies to a commanding position as the score read 258/4 after 42.4 overs.

The hosts looked set for a score in excess of 330 but it were the triple strikes from Michael Vaughan – Marlon Samuels, Dwayne Bravo, and Jerome Taylor – that restricted the team to 301.

You wondered whether Strauss’ great exemplary show did make for the best performances by England in cricket world cup history where the last two decades stand?

Vaughan returned with the bat with an uncharacteristically quick knock of 79. After his dismissal, Kevin Pietersen did the needful and slammed a ton to take England to a win off the penultimate delivery.

One of the top four all-rounders to have graced the game in the 80s and 90s, Sir Ian Botham delivered pure excellence and undoubtedly, among the best performances by England in Cricket World Cup history.

His effort, make no mistake, came amid contemporaries who were no lame pushovers, such as Imran Khan, Kapil Dev, and Richard Hadlee.

Botham had the reputation of being a big match player. That some of his top performances have come in the Ashes is a testament of the fact.

However, having failed to make a significant impact in the past World Cups, Ian Botham had his reputation on the line as he stepped on the field against Australia in the 1992 World Cup, this time in colored clothing.

After winning the toss, Australian captain Allan Border elected to bat. As it turned out, the Aussies kept losing wickets at regular intervals as they huffed and puffed their way to 145/4. However, with Steve Waugh and Border out in the middle, consolidation was certainly on the cards. It was then that Sir Ian Botham was brought in as the second change. The feared all-rounder cleaned up the Aussie skipper and then ran through the Australian lower order, ending with figures of 4-31 as Australia were skittled out for just 171.

He then partnered with Graham Gooch to get England off to an absolute flyer as they added 107 runs for the first wicket. It was Beefy’s 53 which ensured an eight-wicket win for England and a well-deserved Man of the Match award for himself.

There are batsmen who rule with brute power. There are those whose love for sheer grind and sweating it out inspires millions. David Gower, however, had to do none of that; for he ruled with old-fashioned elegance.

He would display an effort over three decades back in time that would become among the best performances by England in Cricket World cup history.

In a match between England and Sri Lanka during the 1983 World Cup, a time where matches used to be 60 overs a side, David Ivon Gower showed his class. Batting first, England got off to a ‘steady’ start as was the norm during those days.

The pace at which England were going is well explained by the fact that openers Graeme Fowler and Chris Tavaré scored at a strike rate of 37.28 and 52.45 respectively in a one-day game.

Now, look at Gower’s innings in this perspective.

The stylish left-hander scored 130 off just 120 deliveries at a strike rate of close to 110, which was a rarity during that time. His innings pummeled England to 333, which happens to be the highest Test score of compatriot Graham Gooch.

In the same match, Victor James “Vic” Marks carried forward the good work by David Gower and took the match to a befitting end. Studded with stars such as skipper Duleep Mendis, now ICC match referee Ranjan Madugalle and Sri Lanka’s one and only ODI World Cup-winning captain Arjuna Ranatunga, Sri Lanka were more than capable of chasing down the score, but it was a fiery spell from Vic Marks which put an end to the remaining hopes of Sri Lanka.

The top-notch performances from both Gower and Marks took England to a 47-run win in that match of the Prudential World Cup. Marks’ figures of 5-39 (12 overs) are still the best bowling figures by an English bowler at the World Cup. 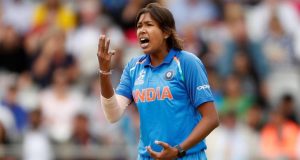 Jhulan Goswami: The One With Big Boots and Bigger Accomplishments

Abhishek Vedpathak - September 10, 2018
1
In the winter of 2001-02, India hosted a Nasser Hussain-led England side that looked much more determined and well-prepared in comparison to what was...