Can you think of any other cricketer who has won the under-19 cricket World Cup, helped India chase an almost improbable target of 326 in the 2002 NatWest Trophy final against England, catapulted India to victory in the inaugural T20 World Cup in 2007, was at the centre of action in the 2011 World Cup, bagging four Man of the Match awards along with the Man of the Tournament, and still falling way short of realising his full potential? This just goes to show the abundant talent that the man possessed.

Interestingly, Yuvraj started playing cricket reluctantly at the behest of his father. As a child, he did not want to run. He did not want to train. He did not want to bat for hours in the nets. But, despite applying a fraction of his mind to the game, it was his talent that helped him shine through. One of the most elegant left-handers to have graced the cricket field, Yuvraj returned with the man of the match award the very first time he stepped out on the field to bat, in the 2000 Champions Trophy, against an Australian bowling line up studded with the likes of Glenn McGrath, Jason Gillespie, and Brett Lee.

Destiny was unfair to him after the World Cup victory in 2011, when he was at the peak of his powers and was diagnosed with cancer. Even if Yuvraj Singh did not make a comeback post that, he would be one of the greatest limited-overs players ever in the books of many, however, the fact that he fought against such a menacing and deadly disease such as cancer and stepped back on the cricket field in Blues makes you tip your hat to him.

“As I go back in time today, my life has been like a roller coaster ride. Winning the 2011 World Cup, being Man of the Series, four Man of the Match awards was a dream. Which was followed by a harsh reality – getting diagnosed with cancer?

It was like touching the sky and then falling down at light speed and hitting the ground hard as all of this happened so quickly and when I was at the peak of my career,” Yuvraj Singh said at a press conference while announcing his retirement.

Many hold the belief that the 37-year-old fell way short of realizing his potential. To those, here’s a defense: Yuvraj was hit by a deadly disease such as cancer when he was at the peak of his career. Had that not happened, the following years could have well ended as the defining phase of his career.

A prisoner of unrealistic expectations

Accepted, Yuvi was never the same player after his return post-cancer. But, how cruel of you to expect that he could be the same after combating a life-threatening disease? People can’t find the zeal to live to the full after such a disease, let alone representing your country again. Yes, he had a larger than life image and remains to be a hero in our minds. This is probably why we expected more of him than he could deliver.

There’s no shame in conceding that he struggled many-a-times post his return. And it did not make for pretty visuals at all. In fact, it was heartbreaking to see a legend, struggling against bowlers who he would have smacked without fail at his prime. However, just the fact that he represented India after battling cancer says a lot about the man he is.

Not quite the swansong

As Yuvraj Singh ends his playing inning, he will now channelize all his energy towards YouWeCan, his foundation that works for cancer patients. “This brings me to my next focus in life – which is to help cancer patients through my foundation YouWe Can.

At YouWe Can, we spread awareness about cancer and help the underprivileged by conduction screening camps, funding their treatments and sponsoring the education of the underprivileged cancer kids. We have also started our own merchandising arm, YWC for the foundation to help generate funds for the cause. I really want to make a difference to the society by setting examples through my inspiring story,” said Yuvraj.

That said, not only did the southpaw make a comeback but he helped India win some crucial games even during the fag end of his career. Remember the six and the four he hit against Andrew Tye to help India win the T20I series against Australia Down Under.

His 150-run knock, which remains his highest score in ODI cricket, against England in Cuttack on his last ODI comeback will be etched in golden letters in Indian cricketing history.

Yuvraj Singh was India’s most valuable player in both the 2007 T20 World Cup and the 2011 World Cup. A talisman who inspired with both his on-field and off-field heroics, Yuvraj will be long remembered.

As he goes off the stage, one wishes he continues to drive all volleys in life with that characteristic high elbow and silken touch, depositing them out of the park. 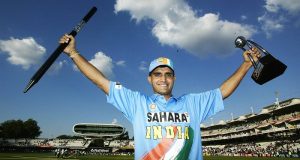