Rashid Khan, the name is quite popular in the cricketing world, for the bowling style, leg-break googly and for personifying the passion with which the Afghans take to the game.

After having a dismal show in the ICC World Cup 2019, Gulbadin Naib’s captaincy came under the scanner which made them change the captain.

Yes, you read it right. And who could’ve been better other than the man who’s hard to be picked on the cricket field by confused batsmen?

Rashid Khan has been appointed as the new captain of Afghanistan across all formats.

He had a forgettable World Cup as he managed to take six wickets at an average of 69.33 and a strike rate of 71.8 in eight innings. He also became the joint second-most runs gave away by a bowler in an ODI while conceding 110 runs from his nine overs.

But, it’s cricket. It happens all the time and often to the best. Wondering how? How many tons did the likes of Virat and Gayle end up with?

However, this is not the first time that Rashid Khan would be leading his side. He had led Afghanistan during the World Cup qualifiers in Zimbabwe last year in absence of Asghar Stanikzai.

Afghanistan lost three of their four games. However, he has also led Band-e-Amir Dragons and Kabul Zwanan on 16 occasions in T20s where they won ten games and lost six.

On the other hand, under Asghar’s captaincy, Afghanistan registered 31 wins in ODIs and 37 in T20I. He also led Afghanistan to their maiden Test win against Ireland this year.

Although Rashid Khan didn’t have a successful record as a captain, he has a splendid career graph in this age of 20. It was only in 2013 that Afghanistan became an Associate member and ever since then, their rise in international cricket is an amazing story to be told, and retold

For instance, how many thought they’d even break into the ten sides competing in the ongoing world cup?

Rashid became the fastest and youngest to rush to 100 ODI wickets. And it only took him 44 matches to reach the feat, breaking Mitchell Starc’s record of 52 matches.

He even became the fastest bowler, in terms of time, to take 50 T20I wickets where he reached in two years and 220 days. In 2017, he registered the fourth-best figures in ODI, claiming 7/18.

These varied experiences of playing shall help him to lead his side. He can implement a lot of techniques which he has been learning from his tenure with the franchise while playing the T20 leagues.

His first series as captain will be a one-off Test against Bangladesh in September. It will be interesting to see how he leads his side. 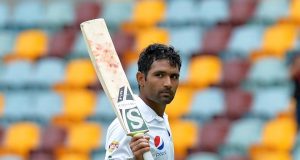 Asad Shafiq: Now Is The Time

Abhishek Srivastava - May 26, 2018
0
For first seven years of his international career, Asad Shafiq played under the shadow of Misbah Ul Haq and Younis Khan. But after their...