The difference between writing a fiction and non-fiction story is just that in the latter you know what has happened, and in the former, you have to create for others to get engrossed with it. Well, similar has been the story of Australia’s former vice-captain, David Warner, who came back into the national setup after a yearlong International ban which he needed to serve after the ball-tampering scandal in South Africa in 2018.

With 2018 calendar switching to 2019, it tucks neatly into place for David Warner. Yes, it’s now over one year since Steve Smith, David Warner and Cameron Bancroft were suspended from playing cricket for Australia under the glare of a global spotlight.

And it wouldn’t be wrong to say that Australian management was ‘desperately’ waiting for the bans to get over as the things took a downward spiral ever since the infamous incident. Since their departure, things didn’t look up well for men-in-yellow. Statistically, from being one of the most formidable cricketing teams on the planet, the Aussies found themselves on the other end of the cricketing spectrum, with pundit and audiences lamenting over the ‘downfall of the Australian men’s team.’

A lot of questions, analysis, and theories came up when Steve Smith and David Warner were sidelined. The media had spun a predictable narrative, equating the Australian Men’s team performance with Warner and Smith’s exit and had even called it a day to Australia’s chances in the recently concluded ICC World Cup 2019, with many opined that men-in-yellow will not finish in top 4.

However, with Warner’s effort upfront coupled with Smith’s performance lower down the order and Starc stamping authority with the ball, Australia did make their way through to the yet another World Cup semi-final.

So where did it all start from? Can we here, just for a moment go a few months back?

Well, if you’re reading, it was time for the twelfth edition of the Indian Premier League and the year saw the return of David Warner and Steve Smith to IPL. Though the duo was involved in a few franchise-based leagues across the globe, performing in India, just before the World Cup, against supreme best in the business was all that the duo was looking, especially – David Warner.

Warner came into the set with a bundle of nerves and was aware that a few hours later (then) Australia were going to play their second ODI against Pakistan in Sharjah. Finch was coming off a brilliant century and Khawaja was in fine form too. If they once again gave Australia a flying start, it would only make Warner’s comeback to the national team slim.

Before an IPL game, Warner is usually among the chirpy ones in the dressing room, which I have personally seen from a distance. But, on that day, before the first IPL game, it was all different. He was very quiet and was within his thoughts. According to interviews, all he did before the start of play was drink pickle juice and go to the toilet to control his anxiety.

But as every cricket fan must be aware, he finished the tournament with 692 runs – being the highest run-scorer of the season.

Then came World Cup time, and he did what he is known for – repeat the heroic again and again. Representing his country after a year, he finished as the second-highest run-scorer of the tournament, being just one run behind from the top scorer Rohit Sharma’s 648.

Two big tournaments, one after the other, ending with over 640 runs on both the occasion speak volumes about his character – which will once again be tested against the World Champions England as the Australians are set to play five-match Ashes series.

And the fact that Warner’s wrists are more concrete than and not as supple as saying a Steve Smith or Usman Khawaja ensures that he isn’t adept at maneuvering balls coming at him from that angle through the off-side. The top-hand heavy grip on the bat which didn’t help him during the limited-overs may well do all good against the red cherry.

In the longest format of the game, where all players look to leave a mark this will certainly be one of the best opportunities for Warner to utilize his form and come out all guns. If he can play like the way he is playing at the moment, Australia may well fancy their chances of winning Ashes in England. More importantly, if Warner plays that part, populous will certainly rewrite the already scripted 2018 page.

IPL, World Cup, and now Ashes – it looks well on cards. But the question remains the same, will he be Australia’s man yet again? 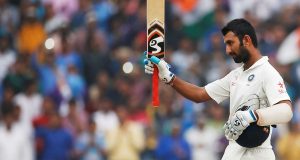 Have You Looked At Pujara’s First-Class Record?

Dev Tyagi - November 4, 2017
1
It's not always that a Cheteshwar Pujara manages to make news. But when he does, one's assured, it lasts for a while. Just how many...