When people heard about “Chris Gayle” the first thing that comes to every body’s mind is “Six”. A huge hit. Someone somewhere hears a glass being shattered, a bowler grunting in anger. He truly is a six-hitting machine, as also admitted in his book.

None one can deny that he is a Universe Boss. But apart from that six-hitting ability, not many would know that Chris is an outstanding all-rounder in all the formats of the game.

We first saw him in 1999 against England. The West Indies needed to defend 4 runs in the final over with 3 wickets remaining. And guess what, Chris defended that. He scalped 2 wickets and affected a run out in that over with Alec Stewart at the non-striker’s end. He bowled with exceptional precision with outstanding Yorkers.

In the series against Pakistan, Chris smashed Shoaib Akhtar and Waqar Younis in Sharjah. Did anyone see that coming?

Who was this tall, lean Jamaican fellow?

At that time, hitting sixes was always a tough thing and you can’t see that often. Chris slowly changed that. Only very few players have a greater impact in the game than Chris Gayle.

He truly announced himself as a supreme player and a serious threat is against India in the year 2002. He scored over 450 runs with 3 centuries in a 7-match series. After that, there is no stopping Chris Gayle. He smashed literally on all grounds against all the bowlers (Of course, he always respects the quality bowling)

In Gayle’s case, the format is tailor-made for him. He took the T20 World cup by storm, scoring a classic century against South Africa. Against Pollock, Ntini, Kallis he was a giant unwilling to bend down.

Many pundits thought the T20 will revive the West Indies glory. It sure did. If not as a team, for a collective but for a lot many. Chris is one such individual.

By far, he’s the greatest ever T20 player to have walked the planet. He was and still is, loved by all. He entertains on and off the field. He was so into the format that he went on to publicly criticize the Test format “I wouldn’t be so sad if Test cricket died out” in 2009 during the tour against England.

Perhaps any modern-day West Indian batsman would be incomplete without the IPL. They thought that they have dual citizenship that’s why even in the name, they have West Indies is there. Some of the players got chances to act in the regional movies, while some shifted their cities. IPL was/is/will be a game-changer. It would have changed the life of the player or making things worse between an already strained cat on the wall relationship between the board and the players or both.
He was picked up by Mallaya after unsold in the initial auctions because of the tour against Pakistan.

But Gayle asked the board to give him a NOC and played for RCB. He took that year’s IPL by storm. And from that movement, he took all the T20 leagues by storm, The Gayle Storm. On 23rd April 2013, Gayle attained a Godly status in T20 cricket after hitting a magnificent 175 (66) against Pune warriors India. He soon went to blast almost all the batting records available in T20 cricket.

The Greatest Innings of Chris Gayle

Not many IPL fans or T20 fans know the effect of Chris Gayle in other formats. To me personally, Chris Gayle’s unbeaten 165 against Australia in Adelaide in the year 2009 is going to be the ultimate innings. He carried his bat throughout the innings and scored 165.

We know that Chris has scored 2 triple centuries. He wore 333 in all the T20 league games to show his admiration of Test cricket.

How ironic that Gayle happened to break the great Brian Lara‘s tally for most ODI runs ever by a West Indian batsman in Brian Lara-land; at the Prince’ home ground?

Something more jubilant for Chris Gayle was the fact that he topped the ODI run tally for all West Indian batsmen in his 300th ODI, a feat to remember, ha Chris?

Over the past decade and a half, we’ve seen Gayle blast past the best bowling attacks, smashing Lee, sending Johnson, Gul, Malinga, and others out of the park.

We’ve seen him grow his beard, cut his hair, grow long curls, tease women while scoring runs and dollops of them all over the world.

Without shying away from his irrepressible character, without slowing the tempo of the beat of his beat. The only thing that one awaits now is for a graceful exit; when it’s due, not when the growing chants for his ouster become unbearable.

Come on Chris, like with so many big smashing hits, you can dismantle this one too out of the park.

Thank You, Chris, the Universe Boss! 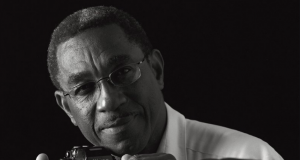 RIP Gordon Brooks: A Man Whose Flair Behind The Camera Captured...

Dev Tyagi - July 2, 2021
0
A story is really nothing in the absence of words and sentences woven to convey a tale that makes sense and drives purpose. But...