After much speculation, India ODI captain Mithali Raj has announced her retirement from the shorter format of the game earlier this month. Although Mithali Raj was still needed or not that will lead to another debate, India have not featured in any International tournament for more than five months apart from the Women’s T20 Challenge.

But what can possibly be a better thing that India are going to play again?

However, Mithali less India team are not looking weak in any way as the 15-year-old Shafali Verma has earned her maiden call-up in the series at Surat starting from September 24.

The opening batter from Haryana has already impressed everyone with her natural attacking style of batting and earned the call up on the back of a stunning 2018-19 domestic season. If she gets the chance to play on Tuesday (September 24), she would become the second-youngest (in any format) and the youngest Indian to play in T20Is.

Along with her, there will be Smriti Mandhana in the opening, the graceful left-hander who can single-handedly change the game.

After all, who can forget her gorgeous cover drives and beautiful lofted shots?

If Mandhana will entertain you in the opening, Jemimah Rodrigues will be there in the middle. The youngster is coming fresh from the Kia Super League (KSL) where she smashed a century as well and finished the season with a whopping 401 runs.

And, then there is the captain Harmanpreet Kaur. The one who can hit sixes with so much ease that someone is hitting sixes in gully cricket. However, after a successful stint with Western Strom in the KSL, Deepti Sharma too will be keen to maintain her form in the series.

Veda Krishnamurthy’s return will be beneficial for the team as well as for her too. Despite scoring three single-digit scores in the last four innings she played, the team management showed their faith on her. Although she is capable of playing big shots and her inclusion in the squad could give stability in the lower middle order as well.

There is one more notable inclusion in the squad – Pooja Vastrakar who was out of the squad for a long time due to injury. Along with her bowling, she is a handy batter too. She has a strike rate of 137.09. With her presence, she can make a solid contribution with the new ball as well as with the bat in the final overs.

Moreover, there will be experienced Shikha Pandey, Mansi Joshi, T20 specialist Anuja Patil, Taniya Bhatia and captain’s go-to bowler Poonam Yadav who can turn the table any time with her googly.

However, looking at the squad, India have covered all the bases – be it openers, middle orders or the bowlers.

As far as their last meeting’s concern, it was in 2018 when both the teams last faced each other in Twenty20 Internationals during India’s tour to South Africa. India had beaten South Africa 3 times and lost a solitary game whereas one game was washed out.

Clearly, India should have the upper hand, isn’t it?

South Africa registered an easy win in the second warm-up game against the Board President’s XI on Sunday. Although this new India team is a pure blend of experience and youth, it will be interesting to see how they will perform under the lights. 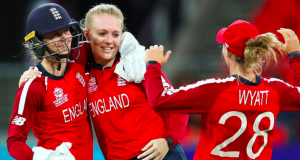 The Rapid Rise Of Sarah Glenn: The Leg-Spinning All-Rounder One Can’t...

Shruti Banerjee - October 8, 2020
1
During the second game of the five-match T20I series between England and West Indies, the hosts were reduced to 96 for 6 inside 15 overs. The...