Former India captain Sourav Ganguly appointed as the new BCCI president. Earlier reports suggested that Brijesh Patel would be the new boss of the BCCI but after some discussion, Sourav Ganguly emerged as the new president. On Monday, Ganguly filed his nomination. Since all candidates have emerged unopposed, no election will take place.

Although everything was going fine for Patel till about 9:30 on Sunday night until a few members suggested that the person, because of whom the board went through a tough phase for the past few years, or his man can’t be brought back.

Then Anurag Thakur suggested Sourav Ganguly’s name and got the backing from the North-Eastern as well as the Western states as well.

Sourav Ganguly’s stint will only be for 10 months after the three-year cooling-off period which will begin as per the rules set by the Lodha Committee.

Sourav Ganguly has been associated with the Cricket Association of Bengal (CAB) for the past five years and according to Lodha Committee recommendations, an administrator can only be in that position for six years on the trot.

On Monday, he shared that he wants to do something good as he is taking over the reigns of the board at that time when its image is not too good.

“Obviously, it’s a great feeling as I have played for the country and captained the country. And I am taking over at a time when BCCI has not been in greatest of position for the last three years. Its image has got hampered quite a lot. It’s a great opportunity for me to do something good,” said Ganguly to PTI.

However, he has planned to meet all the stakeholders in Indian cricket and wants to do something that the Committee of Administrators (CoA) hasn’t done yet for 33 months. Even he shared his first priority in his short term would be to look after the “first-class cricketers”

“We will speak to everyone first as we take a decision but my biggest priority will be to look after first class cricketers. I had requested that to the CoA for three years and they didn’t listen. That’s the first thing I will do, look after the financial health of our first-class cricketers,” added Ganguly. 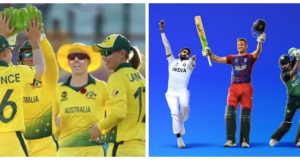 Moments That Defined International Cricket In 2022

Vikrant Choubey - December 29, 2022
0
The year 2022 is drawing to a close, which has been significant for international cricket. From India's tour...