These are difficult times to endure as an upcoming hero and make a mark in Indian cricket. The reason being, this unit is at a stage where everyone is a superstar in their own right and at the top of their mark, be it the ones on the field or the bench. During such highly testing times, if someone makes his presence felt in such a loud way that it just boomerangs into a world record, it has to be very, very special. The special phenomenon, in this case, is none other than Deepak Chahar.

Chahar returned with figures of 6/7 in the third T20I versus Bangladesh at Nagpur, the best-ever in T20 internationals. He also became the first Indian male cricketer to grab at T20I hat-trick. And the Man of the Match and Series awards were nothing but deserving, to say the least. It’s a great moment for him and the team, but at the same time, those who have known or followed him would treat this as something that was already on the cards. Though he has played merely a single ODI and just 7 T20Is, it is quite a small sample size to heap extreme praises or calling out on his big future ahead. The fact is, he is just too hard-working to not make anything happen of that sort. This, in fact, was his first full series. Hasn’t he aced it better than anyone could even think of?

If the memories have faded as they generally do, let’s rewind back to Chahar’s domestic debut against Hyderabad in 2010. He ran riot with 8/10 leaving the opposition at 21 all out in the first innings. He added 4 more to his tally in the second with the bowling scorecard reading 12/64 at the end of the match. If this doesn’t look impressive, nothing else can. Two years before this feat in 2008, he was snubbed by Greg Chappell as someone who didn’t have it in him to enter the big stage. A decade later, he has owned that very big stage.

A lot has gone into the making of this 27-year old. Deepak Chahar’s approach to bowling is like a seasoned warhorse who believes in traditional methods and tactics of keeping it very simple day in and day out but also is equally clever, subtle and effective in his variations and strategies that separate the best from the good in today’s T20 cricket. He doesn’t have raw pace, but has mastered the craft of swing and control and has calibrated that with confidence and maturity. How else would you expect him to come up with such marvelous figures in the dewy conditions at Nagpur? With Bangladesh threatening to take away the game at the halfway stage, they surrendered meekly to Chahar.

To top it all, he almost emulated his hat-trick in the Syed Mushtaq Ali Trophy against Vidarbha in the next 48 hours. He snared three wickets off the last three legal deliveries, but only to bowl a wide in between his first two dismissals and finished with 4/18. What does this indicate? It’s all about simplicity, consistency, and methods. It’s just about having another day in the office. He doesn’t care if the stage is that of a T20I or a domestic competition, if the crowds are in thousands or a few hundreds, or if there is a watchful eye over him or not.

Chahar played an active role in CSK’s grand return to the IPL fold in 2018 with 10 wickets at the rate of 7.28 and earned the India cap in July 2018 on the tour to England. He literally doubled his threat in IPL 2019, finishing with 22 wickets at an economy rate of 7.47. Taking advantage of his neat bowling spells, skipper MS Dhoni used all his overs upfront and prevented the opposition from running away with a big score in the power play.

With India eyeing Mission 2020 in Australia next year, Deepak Chahar has raced quite ahead in his nomination to be India’s bowling spearhead. And yes, he has ticked all the boxes quite handsomely. 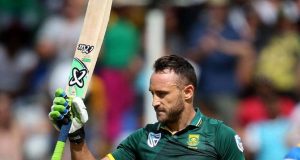 Why The Hobart Hundred Explains The Joy That Faf du Plessis...

Gaurav Sethi - November 11, 2018
0
It is often said batting average decides a cricketer’s pedigree and the number of hundreds one scores defines greatness. While this argument holds true...