She has continued to play for the Sydney Thunder franchise since her international retirement but said after the game against Melbourne Stars – which her side won on the back of her 47-ball 65 – that this would be her final game.

“I’d decided before the match that I was going to retire. It’s got to come to an end at some point,” Alex Blackwell said.

“There’s been many highlights, but what’s been really cool is watching the next generation of Thunder players grabbing their opportunities. It’s been very special to be a part of that – I’m really satisfied,” she added.

“I’ve been really happy with mentoring out in the middle. I had an opportunity against the Stars to bat with Phoebe Litchfield and Saskia Horley. It was good to talk to them about what the good options were to go to – and to help clarify in their minds what was on, and where to back themselves,” said the former player.

Alex Blackwell, the most capped international player of Australia who led the team to a T20I World Cup victory in 2010, said she wanted to play for one more year after last year’s close semi-final loss to the Brisbane Heat in WBBL.

“I was heartbroken, but also amazed, by last year’s semi-final,” Alex Blackwell said. “I, well, a little bit selfishly… thought to myself, ‘I’ve worked so hard to get to this point and contributed to cricket for a long period of time for it to reach this point’.

“I thought the WBBL was an amazing competition to be a part of and decided I could go again – and I’m pleased I did. It’s been good fun, and I’ve enjoyed supporting Rachael Haynes because I think she’s led the team very well,” she expressed.

Having made her international debut in January 2003 against England in an ODI, Blackwell had played 12 Tests, 144 ODIs and 95 T20Is, more than any other female player of her country.

Blackwell was a part of Australia’s World Cup wins in 2005 and 2013. She also holds the record for the most matches and most runs for the WBBL franchise Sydney Thunder, men or women, with 71 matches and 1,751 runs at 35.02 so far. 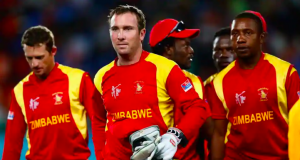 A shot in the heart: Problems with Zimbabwean cricket

Abhishek Srivastava - October 5, 2018
0
The problems with Zimbabwean Cricket involve a tussle over pay between senior player and the board. This recently embarked the biggest crises since 2004...