How many all-rounders have you seen so far who have been making headlines with both bat and ball? One’s sure you might have seen a few and Australia all-rounder Ellyse Perry is one of them. But you certainly can’t forget one name – Sophie Devine, whose divine form is currently doing wonders in the ongoing Women’s Big Bash League (WBBL).

The key player of the WHITE FERNS, Sophie Devine is one of the important members of Adelaide Strikers. She not only opens the innings with her national teammate Suzie Bates but also opens the bowling too, more often than not, for the Strikers.

Recently, she made a couple of records in the WBBL. Although she started with the quickfire 72 off 45 which included 6 fours and 4 sixes against Melbourne Renegades, it took a couple of games to get back into the rhythm and when she got settled, it became a task for the bowlers to get the better of her.

Let’s have a look at the records she has made so far in the WBBL 05:

Adelaide Strikers won the toss and opted to bat first where both Suzie Bates and Sophie Devine opened the innings. Although Bates started well, she scored a mere 27 before getting dismissed.

Brisbane Heat bowlers didn’t let Strikers’ batters open their arms and the fall of wickets at regular intervals left them struggling at 75 for 5 within 12.3 overs. It was Devine who took the side to a decent total of 141, scoring 65 off 53 with 8 boundaries.

However, her valiant knock went in vain as Beth Mooney’s unbeaten 77 off 51 including 10 fours sealed the deal for Brisbane Heat.

Adelaide Strikers won the toss and chose to bowl first where Perth Scorchers openers Amy Jones and Meg Lanning added a huge 141 runs for the first wicket. Sophie Devine was the player who successfully broke the partnership although it was too late for they put up a huge total of 173 on the board.

But who knew the Strikers would give a tough fight by that point?

What followed soon thereafter was the Sophie Devine show with the bat.

Devine scored a well-made 58 off 50 before getting out in the 17th over. Although Bridget Patterson tried her best with a 32-ball 60, both her and Devine’s heroics went in vain as they lost by mere 2 runs.

Sophie Devine’s onslaught, late in the innings, set the tone for the Adelaide Strikers as they registered a 17-run win over the Melbourne Stars.

Devine smashed five consecutive sixes from the final five balls of their innings to lead them to 164/4. If one wanted a table-topping batting performance in the 2019 WBBL, then this was it.

Within no time, she went from relatively sedate 55 from 51 balls to finish unbeaten on 85 from just 56.

In reply, the Stars lost their captain Elyse Villani (1) cheaply before South African duo Mignon du Preez and Lizelle Lee steadied the ship. Although they both smashed the fifties, their dismissals left the side in trouble which led them 115 for 1 to 147 for 8.

Sophie Devine’s five sixes saw her break the record for hitting the most consecutive sixes (5), a feat previously unachieved in the dazzling showdown of WBBL.

Sophie Devine’s all-round performance has handed over a convincing 57-run win to Adelaide Strikers over Melbourne Stars. Devine smashed an unbeaten 77 to lift the Strikers to 2-153 before scalping 3 for 13 to help restrict the Stars to 8-96 at Adelaide.

After this match, Sophie Devine became the leading wicket-taker with 13 scalps which came at 15.38.

If you’re thinking this is it then you are wrong!

Her scintillating form continued, with her fifth-consecutive half-century coming against the Thunder side. After restricting the opponents within 112-4, Devine started the chase with perfection and remained unbeaten on 62 from 58 balls, registering another win with five balls to spare.

The fifth-straight half-century of Devine has already become a record in the WBBL 2019. With this, she has become the second-highest run-getter in the points table with a whopping 474 runs in 10 innings, just behind Brisbane Heat star Beth Mooney. Even her 18 sixes so far is also the highest in the WBBL. She is currently placed at fifth with 14 scalps from 10 innings as well.

In the semi-final, Adelaide Strikers faced Meg Lanning-led Perth Scorchers. Adelaide Strikers won the toss and opted to bowl first. Put into bat, Scorchers didn’t get a flying start as they lost their top order within the powerplay.

However, an 88-run partnership between Georgia Redmayne and Jemma Barsby took the side to 126 for 7 in 20 overs. Both Megan Schutt and Devine picked up 2 scalps each.

While chasing, Suzie Bates fell for mere 1. Devine once again anchored the chase, scoring an unbeaten 65 off 46 (8*4 and 1*6) and took her side to the finish line.

Sophie Devine needs just 14 runs in tomorrow's final to eclipse Ellyse Perry's record for most runs in a season set at the end of #WBBL04 😵 #WBBLFinals pic.twitter.com/2bQG6ob3mh

She has amassed 764 runs in 15 innings at 84.88, including nine half-centuries alongside taken 18 wickets at 19.27. She needs only 14 runs to surpass Ellyse Perry who scored a whopping 777 runs in 16 innings in the last season of WBBL.

Only time will tell whether she will be able to break Ellyse Perry’s record or not. Let’s wait for the final against Brisbane Heat to get the answer. 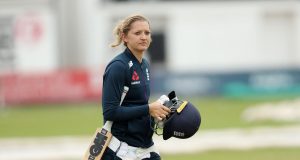 Chandhana Gogineni - October 1, 2019
0
Sarah Taylor has been arguably one of the talented athletes England cricket have ever produced and the International Cricket has witnessed so far. It...