It is windier than usual. You can feel the breeze.

Not like the one Geralt, the white witcher felt when the slimy monster attacked him but still, significant. In his training shorts and slippers is Colin de Grandhomme sitting on a grey motorbike he just won as the ‘Man-of-the-series’. Captain Tim Southee gets on it too. But Tim has to do media so he gets down and de Grandahomme just takes off. He laughs as he slows down and does a little stunt, standing up. It was all very well controlled.

Control is his USP as a bowler. He is one of the slowest-tallest fast bowlers in the modern game. Born in Harare, he was a part of that Zimbabwe U-19 team that had stunned Tim Paine’s Australia in 2004. He moved to Auckland thereafter and they started calling him Dutchie because they thought, he is a South African. But ‘dutchie’ in English refers to a large, heavy cooking pot.

He has an easy run-up, his loading arm is close to the body which helps his spectacular accuracy. The commentators kept talking about Trent Boult’s delivery that got Virat Kohli out in the World Cup semi-final. But the cricket tragic jury rated Kohli’s dismissal of Colin de Grandhomme in the warm-up game much higher.

There are more sheep than humans in New Zealand. The country has approximately 5 sheep for every person, three of which are likely to be all-rounders. With four bowlers and as many batsmen in their T20I squad against India, the Kiwis have opted for six allrounders. On the contrary, none of India’s top six batsmen, bowl. They say Rohit Sharma sleeps on his stomach because he doesn’t seem to like rolling his arm over. It makes you wonder that if Dutchie can walk right into this Indian side. That will solve India’s power-hitting worries, but will he be batting at number four?

It’s been a year that Colin de Grandhomme has been promoted to number four. In his 31 innings, he has batted, he has played 20 or more balls, only on six occasions with three fifties and three 30-plus scores, striking them at 150 or more. His tally of sixes is only inferior to Munro and Guptil although Tim Siefert is closing in.

But he remains a crucial run-getter in that middle-order. When one speaks of ruthless batsmen who can, within a few deliveries change the narrative of a contest it’s not the average that concerns you, especially in T20 cricket. It’s the strike. And nearly at 150 (31 innings), it’s way ahead of Guptill and even better than fluent T20 hitters in Pollard and Brathwaite.

While batting, he drives a nuclear plant worth of energy from his back foot with coupled with saccharine-like strokeplay. New Zealand’s bowling coach Shane Jurgensen recently credited his ‘smart’ batting approach in the T20Is. If the asking rate is 10, Dutchie would rather wait for that half-tracker from the spinner and launch it for a six. He would nudge the wrist-spinner around, but open his arms as soon he finds one in the slot. He had put in some serious work with the RCB’s coaching staff to develop a better game against spin. RCB is producing results already.

January 2020, Auckland. It is always windy. De Grandahomme is taking his time setting his imaginary field, explaining it to the batsman, skipper, Kane Williamson in the nets.

His bowling skills with the red ball are far more superior to that with the white ball. He will play a major role in New Zealand’s seam attack in two tests against India. It was against India at Auckland in the second T20I last year he smashed 50 off 28 balls that somewhat started his batting feast in the shortest format.

From that same pool of all-rounders, Scott Kugerline, who is a right-arm fast bowler and Mitchell Santner, who is the answer to the question,’Is Daniel Vettori growing a beard because he looks like Santner, without it?’ are expected to bowl more, Dutchie will be expected to score the most 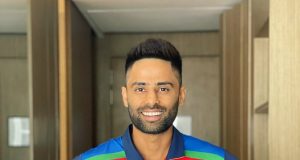 Surayakumar Yadav, The Next Big Thing In White-ball Cricket, And Rashid...

Ashish Kumar - September 4, 2022
0
The cricket fraternity witnessed what could be aptly called a SKY-Storm in the 20th over of the first...