In a game comprising the likes of Muttiah Muralitharan, Shane Warne, and Glenn McGrath, the overall record of Vernon Philander in Protean colours seems to be languishing like a nebulous cosmic object; haplessly outshone by the adventurous shine of the brightest stars in the galaxy. His counterpart, Dale Steyn has obviously enjoyed superstardom as a bowler which is conspicuous of its absence in the case of Vernon Philander.

So, quite naturally there is hardly any trace of hullabaloo with Vernon Philander and his retirement as a Test Cricketer.

Surely, for the sake of everyone, Vernon Philander has never possessed any element to become a household name. There have hardly been lavish moments of adrenaline rush with Vernon Philander being the protagonist. But, still, with the ball in his hands, he could do everything that someone like Glenn McGrath did. He was an astute student of the game and examined the techniques of Steve Smith, Virat Kohli, and Joe Root all at their prime like a meticulous Headmaster.

But, in the same breath, the quiet jog towards the wicket-keeper after dismissing some of the best wielders of the punishing blade did not quite set the stage on fire, Right? It did not even give us extravagant moments of delirious celebrations that people are so comfortable watching.

But, it did the job which he was supposed to be doing.

Can, we recount any worthwhile and ego inflammatory ‘GOAT’ moments when he was on the field as a Professional Cricketer?

So, how should we perceive Vernon Philander and his retirement?

If Allan Donald and Dale Steyn battered and bruised the opposition with their sheer pace, what should be the rightful place for Vernon Philander?

He is the overall seventh Highest Wicket Taker for South Africa, a country known to have produced fast bowlers of the highest pedigree. On many occasions, he proved to be the chief tormentor playing in South Africa.

But, can we even think of likening him with Shaun Pollock, a bowler with similar modus operandi?

There’s little fun in dabbling with no brainers. And equally important to not ignore what’s evident albeit slightly unsung.

Vernon Philander has done enough in his own way to demand a place purely on his own, standing tall alongside other Pace Machines produced by South Africa.

South African Cricket fans can expound an honest narrative about Vernon Philander and his greatness in the game of Cricket whilst being an unassuming performer and an unsung hero of gargantuan proportions.

The clichéd David and Goliath phrase has its own place in almost all walks of life. Vernon Philander has never tried to become The Goliath in his numerous duels on a Cricket Field. Purely as a Swing and Seam bowler, Vernon Philander never did swear at any batsman or tried to assume an unwelcome role of a deadly and mean Pace Machine, much like a Mitchell Johnson or Dale Steyn.

His attributes as a Cricketer never handed him the opportunity to come across as a mean and swaggering Pace bowler.

But, he did what he could do best at a time when unassuming modesty does not really exude much confidence and does not land you hefty Indian Premier League Contracts.

For the most part of his career, Vernon Philander played with the reverberating legacy of South African Pace Bowlers surrounding him and trying to weigh him down as an International Cricketer. The ingenuity of his skills as a Swing bowler earned him wickets in the purest form imaginable.

There have surely been moments of stumps cartwheeling and batsmen having to sacrifice their aura of greatness in the wake of a perfectly pitched outswinger or a menacing inswinger delivered just at the right time.

With some characters caught up viciously in the hyped image of greatness, Vernon Philander excelled brilliantly at an epoch of Cricket when Swing Bowling was always viewed with skepticism and made to go through stringent punishment in menacing conditions.

Vernon Philander has always enjoyed being an appropriate metaphor for limitation and trial for survival. So, what prompted him to retire relatively early?

With South Africa still trying to overcome the repercussions of Morne Morkel’s retirement, Vernon Philander walks into the sunset at a time when South Africa have had their roots as a sturdy and hard to beat International team put into question.

With International teams getting stronger in home conditions, South Africa seems to have allowed self-doubts to become an undesirable part of their painful phase of transition.

Vernon Philander had been a trusted ally for South African captains, as he seldom allowed the opposition to get away whilst Dale Steyn and Morne Morkel could come in and play the role of enforcers to the advantage of South Africa especially in home conditions. His biggest strength was his accuracy and a great semblance of knowledge about his strengths as a bowler.

The seamer has always been well known for his subtle movement which led oppositions to find out ways to negate the dangers which he possessed as a silent performer for South Africa.

Culturally speaking, Philander hails from Ravensmead, a working-class and neglected part of the Cape Flats. Such a socio-cultural environment toughened him both as a human being and a Cricketer. Never for once did he drift away from his trusted method, and subsequently enjoyed enough success against his much-fancied opponents.

Hence, there are lessons to be learned from his career as a Cricketer. Will the upcoming generation of South African cricketers be obdurate enough to toil hard like Vernon Philander?

Surely, the gritty performances that Vernon Philander delivered have elevated him to the status of a role model.

There will hardly be any doubt about that. 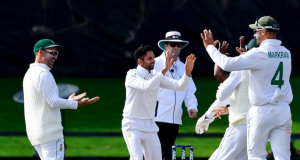 Purposeful South Africa Put New Zealand To The Sword As The...

Pranay Rangra - March 1, 2022
0
When one demonstrates purpose in abundance, impossible just becomes a word. Dean Elgar and his...