2020 couldn’t have offered a better opportunity to see how three among the top sides in the women’s game stand at present other than pitting them against one another.

One wonders, what might have been better than seeing how three of the most respected and dangerous sides in the international sphere fare against one other with the Women’s T20 World Cup just around the corner? The Women’s Tri-series 2020 is, therefore, unquestionably important as it’ll serve a clear idea how Australia, India, and England stand in a format where they will be tested and expected to outperform the others with perhaps one of the year’s most-awaited events begins in Australia in a matter of few days.

That said, who are some of the most important forces that promise the power to make the Women’s Tri-series 2020 an exciting fest?

You know you’ve arrived when someone like an Ellyse Perry rates you highly!

“She bowls fast, drops into the wicket, and she swings it,” exclaimed Ellyse Perry about a talent who’s already been playing international T20 cricket for the past 3 years.

The 18-year-old-Victorian was just 15 when she had made her WBBL debut, for the Melbourne Renegades and she’ll be one to watch out for during the Women’s tri-series 2020.

At the time of her debut, Annabel emerged the youngest to feature in the Big Bash contest.

But praise can never seem bland when you make an impact very early on, making most of the initial chances you are afforded.

Annabel Sutherland, who’ll be a giant attraction in the Women’s tri-series has represented both Australia Under-19s and Australia A. In fact, the very India A v Australia A contest – an unofficial ODI- which India won by 16 runs, on December 12, 2019, in Brisbane, Annabel was the second-highest scorer for Australia A making 52 off 52 balls.

Batting at Number 5 and struck 6 boundaries, Annabel gave Mansi Joshi, Dakshina, and Anuja Patil a taste of what India can expect in the forthcoming series.

In the same game however, Shafali Verma made 124 off 78 balls.

So far, she’s already rubbed shoulders with the Victorian greats like Ellyse Vilani, Molineux, Lanning and none other than Perry herself.

In a game held early in January this year, Annabel crafted a lone vigil in the form of 67 off 89 balls, in top-scoring for a lineup that had Perry in it.

Her team went down to Western Australia by 25 runs in this Women’s National Cricket League contest.

There’s little that can be said or expressed about a cricketer who, in a brief career has already collected 1451 runs from just 66 T20 outings in the international arena.

With a batting average of 24, a strike rate of 117, a penchant to score freely and quickly, Smriti Mandhana, who’ll turn 24 later this year has already collected 10 fifties in the sport’s shortest format.

Truth be told, it’s hard to imagine the current batting line-up in the absence of one of the hardest hitters of the white ball in the game, alongside a Lizelle Lee and Danielle Wyatt.

Prior to entering the Women’s tri-series 2020, the belligerent left-hander from Mumbai, among the shining stars from India, and had already struck 29 sixes in the T20 format.

A “hard-as-nails” cricketer, one of the greats of the modern game, Meg Lanning is a classic example of how determination and mental toughness can lead one to great heights.

Among the most respected names in the sphere of the women’s game, the Australian captain will be one to watch out for in the ongoing women’s tri-series 2020.

A case in point is Lanning being the first Australian-male or female- to make 2,000 T20 runs.

But why the Singapore-born is so highly regarded is not only down to her hard-hitting batting and that zest to score aggressively.

It’s her man-management skills and the ability to lead by example that lends power to an already dangerous Australian line-up.

Until 2019, the highest-individual T20 score for Australia belonged to her, courtesy an unbeaten 133 of just 86 at Chelmsford in 2019, a record which was beaten that very year by her fellow Australian, Alyssa Healy, versus the visiting Sri Lankans.

Prior to the start of the women’s tri-series, Lanning had already scored 2580 runs, from 94 T20Is, 89 innings, including 2 centuries and 13 fifties.

Want more about the prolific scorer?

A batting average 36 – better than Harman, Smriti, Wyatt- makes the great Meg in a league of her own.

Bowlers facing her would be advised to watch out for offering anything untoward; whether short or in her zone. This, after all, is someone who back in 2014, collected 625 runs, the highest tally ever achieved by an Australian woman in a calendar year.

Considered one of the greatest ever fast bowlers from England, Brunt, with 74 T20s against her name (prior to the start of the women’s tri-series 2020) has a wealth of experience, in both dominating the best batswomen in the game and stamping her authority on the sport.

Few cricketers manage to chart long careers being fast bowlers. Even fewer continue to scale peaks for an onerous period of a decade and a half.

There’s an energy, an emotion about the great Katherine that reflects the pride each time where the famous fist-pump triggers celebrations at the fall of a wicket.

For someone who’s struck 269 times in international cricket, Brunt has been the common link that’s contested in divergent cricketing eras.

Someone who debuted back in 2005 World T20 against an Australia featuring giants of the game in Belinda Clark and Lisa Sthalekar, a fiery spell of 3 for 18 was an early indication that Brunt was here to burn down batting attacks.

It’s something that one of the finest from Barnsley has done over the years together lifting the team on her shoulders, time and again. At 34, having bowled 1637 deliveries in T20Is, Brunt will be a highly watched force in the Women’s Tri-series 2020.

The Bendigo-express, Vlaeminck hails from the town associated with the great Australian gold rush(referencing the mid-1900s Central Deborah Gold Mine).

The cricket tragic, aware of the sublime talent, cannot be doubted to think whether this is a reference to Australia having unearthed a golden talent for the future?

At 21, the lanky Melbourne Renegades pacer, someone who’s already debuted in both formats – ODIs, and T20s- having played 12 and 6 contests, respectively has already been around the international circuit for 2 years.

Interestingly on her T20 debut, against India, considered one of the dangerous sides in the current sphere of the sport, Vlaeminck demonstrated her mettle, that too in one of cricket’s grandest contests: the T20 World Cup, 2018.

Conceding only 9 from her first-ever spell of 2 overs, she found a way to keep the usually high-scoring Mandhana, partnered by and Bhatia- a joint experience 106 T20s-quiet.

Considering that she’s got all the time in the world, the one whom Matthew Mott rests a lot of faith, could be a star in the making.

Prior to setting foot in Australia for the Women’s tri-series 2020, Shafali Verma ‘s T20 record read: 222 runs from 9 games.

This may read like an ordinary record. But the moment one notes that a 16-year-old, who only debuted last year scored these many runs, in an all-too-brief a career that’s only just begun, you understand that India’s youngster is no ordinary stroke-maker.

Before she opened the account in the Women’s tri-series 2020 through a characteristically gritty 30 (off just 25 balls), opening alongside a young legend in Mandhana, Verma had given a glimpse of her talent in the Caribbean.

Last year, during her first-ever away series, batting in the Caribbean, Shafali carved 158 from just 5 games, including 2 flamboyant fifties, in the opening contest and the second game of the series, respectively.

It’s said, that it is a matter of time for the Haryana-born youngest cricketer to take the field for India- at present- will scale new heights.

In a sport where most wish to touch greatness or feel, at least, a fleeting hint of what it means to be special, Ellyse Perry, you could be compelled to think, is an overachiever.

At 29, one of the most valued and feared all-rounders in the game is a potent force for the marauding Australian line-up, across formats.

The youngest Australian ever to play international cricket when she debuted against the White Ferns in 2007, which was even before she’d turned 17, Perry, with 1101 runs and 106 wickets, is a Spartan who can both club sixes and fours with glee, and bowl hostile spells, exemplified by her 3 four-fers.

An enviable economy of 5.9 in that format of the game where fours and sixes are but a matter of recurrence, Ellyse Perry inspires as much as she entertains.

She’d undoubtedly be one of the biggest stars to watch out for in the Women’s tri-series 2020.

A pocket-dynamo of a cricketer, Danielle Wyatt is an unassuming cricketer, who loves to bat and collect runs in a flash.

Often, it could be said, she reserves her finest against the biggies in international cricket.

A thrasher of an opening batswoman for England, at 28, Stoke-on-Trent’s right-hander stokes awe thanks to a fantastic record that boasts of 1495 runs, from just 101 games, including 2 centuries and 7 fifties.

If you’re looking for a destructive opening batswoman, then look no further than Wyatt, among the fine scorers on all sides of the wicket.

Her finest T20 moment prior to the period of the ongoing women’s tri-series 2020 was her 52-ball- century that took the world by a storm in March 2018.

It was an effort that united fans on both sides- given the dazzling display of batting which led England to their highest successful run chase in a Women’s T20 international.

In carving 15 fours, including 3 from a single Jhulan Goswami over- and 5 sixes, it seemed if the Brabourne was more home to the English beauty than it was to India.

Although the game featured India’s highest score ever against the English, Wyatt’s fiery batting made light work of a towering 198-4. 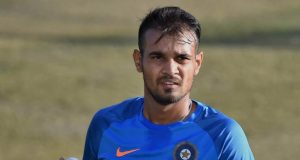