BushFire Bash: Humanity Came Together to Give it Back to the Community

Cricket always gives a lot to fans. But few are those occasions where it finds a chance to give back to the community that makes it the larger-than-life sensation it is. On February 9, 2020, our beloved sport gave a chance to a few ‘has-been’ greats to come together and put up a show Down Under to enthrall fans worldwide in a ’10-a-side’ contest whose biggest reward was the embattled continent we all adore: Australia.

Having been at the epicenter of the bushfire tragedy, a climate-change menace that has led to catastrophic loss that’s harmed billions of animals (some of them extinct), and human life, leading to an irreparable loss the continent’s landscape, the Bushfire Bash turned out to be a significant high for one of world cricket’s finest destinations ever: Australia.

Over the years, Cricket has turned players into legends. From Sir Don Bradman to Steve Smith, Kapil Dev to Virat Kohli, we have all seen how Cricket turned talents into timeless stars. So this was another fascinating sight to see some of the great heroes of our game- Yuvraj, Hayden, Lara, Watson, Ponting, Gilchrist, Villani, Symonds- putting on a show to go head-to-head in an utterly entertaining contest whose end beneficiary was a cause that was a winner in itself.

Sometimes a smile is not enough to get out of the crisis; the community needs financial support as well to fight against natural disasters. And thus, arose cricket’s masters together, raising over $7.7 million (Australian) dollars toward the much-desired relief after being harangued by the climate change disruption.

Aptly put by the Indian World Cup 2011 sensation Yuvraj Singh, “This is about humanity coming together because at the end of the day, Australian, Indian, South African – we all are human. The point is to support each other in this crisis. We are here to support the cause and we are looking forward to it,” while

What is BushFire Bash?

The legends’ support raised more than $7.7m for the communities destroyed by the bushfire that wrecked numerous lives, homes in Australia.

The BushFire Bash match was supposed to happen as a curtain-raiser to the Big Bash 9 Finals, but poor weather conditions made Cricket Australia reschedule the game from Sydney to Melbourne.

All match profits and funds raised will go to the Australian Red Cross Disaster Relief and Recovery Fund.

Gilchrist XI won the toss and asked the opposition to bowl first. Ponting XI made 5-104 from its 10 overs.

‘The Prince’ Lara blazed expansive cover drives starring in an unbeaten 30 off just 11 while Watson starred for Gilchrist’s side, scoring just as much as the Trinidadian, although the team ending painfully shy of the 101 ask by just 1 run in a dramatic final-over finish.

The fans witnessed a highly entertaining twenty-overs, with Ponting’s XI holding their nerves taking the game until the very last ball in registering a one-run win over the Gilchrist’s XI.

In the end Cricket wins, not the team!

That being told, such selfless causes not only help raise a fight against the crisis but enable the community around the world believe that the world doesn’t stand isolated and clueless during times of distress; that the cricket world stands united during the great disparaging times such as witnessed by Australia in the last quarter of a year.

We lose together, we win together and in the end, Cricket ensures we stand together during moments of solidarity and difficulties. 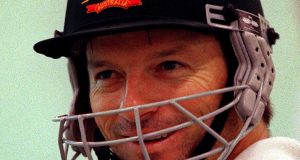 Abhishek Srivastava - November 19, 2017
0
In the Summer of 1997 , Michel Atherton's men, who were deemed to be better than the previous English teams, were aiming to become...