On March 5, 1995, Eden Park lit up in the twilight hours as the crowd’s hero and country’s icon had returned. Martin Crowe entered the fray of Eden Park with the dismissal of Darrin Murry as the country stopped to watch a hero bat once again in whites, after a gap of two years on the home turf. Among thousands watching the proceedings was a boy, hooked on the game whilst being 700 miles away, in Wellington. 25 years later, the same boy will be playing his 100th Test at the iconic Basin Reserve, becoming only the fourth from his country to scale the landmark.

Ross Taylor celebrated his 11th Birthday on 8 March 1995, the day when his mentor- the great Martin Crowe- last played a Test inning on the home soil. A few months later, he was forced to retire due to a chronic knee injury. Crowe was a legend to all, a hero to many, and an inspiration for young Ross Taylor, who says, it was the NZ great who inspired him to take to this great game. Little surprise then that it’s because of this reason that Ross Taylor regards Crowe as the greatest batsman to have played for the country.

But then this day is not about Crowe, but his mentee, Ross Taylor who on 21st February, will become only the fourth kiwi (Stephen Fleming, Daniel Vettori, and Brendon McCullum being the other three) to play 100 Tests.

Coming from a country where Cricket ranks behind Rugby and Football, this is undisputedly an achievement to savor. For starters, most love to simply don the Test whites. Others try to play Test cricket regularly but often miss the bus. That a living legend of New Zealand cricket is about to score a hundred in terms of Test appearances in an age siding with T20Is, should surely come as a one-of-a-kind achievement- isn’t it?

Taylor sits at the top of run charts in both Tests and One-day Internationals for his country and is the only cricketer to play 100 internationals in T20 for New Zealand but how did the journey begin?

As a young Samoan kid, Taylor was quite interested in cricket, unlike his counterparts that preferred Rugby. His talent was identified by Dermot Payton, Wairarapa farming scion who in his free time works on searching for new talents. Payton was impressed by the power-hitting ability of Ross Taylor when he saw him first as a 12-year-old in mid winters of 1996. He says “I would put my life in his hands,” he recalls. “He was only a kid, but man did he hit the ball hard. I stopped suggesting straight drives after a while”

Payton was asked by Central District Association to mentor this child prodigy from Masterton. He was impressed by what he saw of him.“His shot selection was impeccable. Full and wide, cover drive. Full and on middle and leg, on-drive. Short and wide, cut. You could tell he was a talent. He was just so natural. It wasn’t a case of rebuilding him or pulling apart his technique. It was near perfect.

In 2006, when he played his first one day international he was deemed to be a dasher someone who could pump up the scoring rate with his swivel over the mid-wicket which was his trademark shot. In 2007 when he played his first test, New Zealand was about to enter a serious transformation (their first since Richard Hadlee, Evan Chatfield, Ian Smith, John Bracewell retired in space of two years from 1989-1992) as the batting pillars Nathan Astle (January 2007) and Craig McMillan (September 2007) had retired earlier that year and Stephan Fleming would retire 5 months after Taylor’s debut.

In his own words, Ross Taylor was never confident he would succeed at Test level in spite of his limited over success. It was his 120 against England at Hamilton in 2008 that gave him the self-belief that he belonged to this level. Two months later he proved himself again with a blistering 154 at Manchester.

During 2008-2011, an era when New Zealand were trying to rebuild, Taylor became one of the key players with Captain Daniel Vettori and Brendon McCullum. In 2011, he played one of the greatest knocks of World Cup, a match-winning 131- an innings during which he tore apart the Pakistani attack exhibiting customary power. It was an inning that gave New Zealand an upper hand over Pakistan, a trailblazing part of Taylor’s batting that continues to this day, even after 9 years.

In 2011-2012, Taylor held the Captaincy for a short period of time during which he registered two memorable victories, one in Australia at Hobart which is New Zealand’s only win in the country in the last 34 years. The other in his last Test as captain in Sri Lanka. During this test at P Sara Oval, Taylor played one of the finest knocks of his career, a well-made 142 which ensured that the team was able to win much-needed Test win in Asia. Captaincy though proved to be a very tough one for Taylor.

He today says that it came a year or two earlier as he wasn’t ready at that time but couldn’t refuse because it was his childhood dream. The 18 months tenure as a captain proved to be a very rough one for Taylor (as New Zealand performance plunged heavily winning only 6 and losing 12 under his captaincy with 4 wins and 8 losses in test matches).

Ross Taylor recalls his childhood time, especially with Jesse Ryder. Both kids from Wairarapa use to play cricket together with the same team.

While Ryder used to open, Taylor was docked in the middle-order. But, fortunately, Ross Taylor was luckier than Ryder in terms of family’s support. He was also luckier in the sense that he was mentored by the great Martin Crowe, an aspect that helped him transform his game completely.

His massive century against Pakistan in the UAE and a 290 against Australia at Perth were some of the innings that got him worldwide recognition as one of the best batsmen at the international level in the modern era. For a batsman whose craft lacked the grace we associate with stylish strokemakers, Ross Taylor proved he wasn’t just “all power” and about “dislodging the ball.”

He proved, he could get useful runs, big runs by grinding it out, such an emphatic Test batsman quality- right?

His 102* against Pakistan at Hamilton on a green pitch was the demonstration of his class which never needed a particular kind of atmosphere to succeed. While Taylor has been successful in all three formats, scoring runs consistently but he has had special likings for One-day Internationals, In fact, he has been sensational since 2017 onwards, a period during which he has been second most successful batsman behind Virat Kohli, scoring 2744 runs at 66.92 with 6 centuries in 55 matches.

Ross Taylor currently holds the record for most runs for New Zealand in Test Cricket (7174 runs in 99 matches at 46.28) and also sits at the top in One-day Internationals (8570 runs in 231 matches) with total 40 centuries in both formats.

Above all these formats, Taylor has been part of one of the finest teams ever produced by New Zealand. In him and Kane Williamson, the Kiwi land has two-star icons that could inspire future generations to take the game to the next level.

Ross Taylor will turn 36 come March 8 this year. That he’s not getting any younger is known well to him. But in his own words, he wants to enjoy the game which has given him a lot, both in money and fame terms in the past 14 years.

And on Friday when he steps on the Basin Reserve for his 100th Test, the Kiwi land will cherish one of its finest servants who has been with her, in both good times and troubled times. It’s time for both fans and New Zealand- who’ve been treated to a stellar show by one of the most devoted and humble batsmen around- to rise and acknowledge one of the finest cricketers this humane and simple country has ever produced. 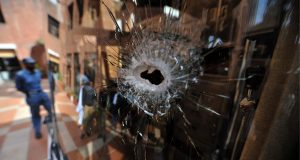 Sri Lankan Cricketers Return To Pakistan For Tests! Recounting The Past...