In a few moments from now, the Sophie Devine-led White Ferns will open their T20 World Cup campaign against the Sri Lankans. Fans and cricket tragics aware of the big-match capacity of the New Zealanders would expect no less than wonders from a side currently ranked 3rd on the ICC Women’s T20 rankings.

In some ways, the White Ferns’ ranking, sandwiched between England- who are second-best after table-toppers Australia- India, placed on fourth- conveys the spirit and performance of a team that none take lightly on any given day.

Big strokes, hefty totals, inspiring partnerships, and the capacity to bundle out oppositions on paltry scores- the White Ferns have done all of that in the game’s briefest format, time and again. Among the teams that inspire as much as they entertain, an aspect of their cricket that’s been evident since their first edition of the Women’s T20 World Cup, Devine’s ladies will look to perform far better than their recent run in this one-of-a-kind ICC event.

While immediate recent record seems to suggest clear and imminent danger for those who’ll challenge their authority in this world cup- exemplified by a 3-1 drubbing of van Niekerk’s Proteas women in recent bilateral series, New Zealand’s T20 World Cup record certainly suggests they can do better.

Thus far, having featured in all six editions of the eminent tournament, New Zealand have been semi-finalists on two occasions-  2012 and 2016- and emerged as the runners up in 2009 and 2010.

But what eludes them, to date, is the cherished T20 World Cup crown, something the Australians have picked on a phenomenal 4 occasions and the English and Windies have collected on 1 occasion previously.

Somehow, despite going into the business end of a truly thrilling Women’s contest, it could be said, the White Ferns haven’t quite been able to translate their success into lifting the coveted crown.

While we do not know the answer as irrational assumptions are as needless as the rarity in handing out a soothsayer-like verdict, what can’t be denied is that the 15-member squad boasts of both youthful talents full of exuberance as well several match-winners, who provide a wealth of experience to the ever-competitive side.

Two genuine match-winners, Bates and Devine- famously known as the “smash sisters”- not only bring the rare distinction of having featured in each and every World T20 edition but boast of a commanding record that’s enviable:

Her familiar wrecker-in-chief Suzie Bates- among the finest batters the game has seen- has the distinction of scoring the most runs ever struck in T20 World cup contests at 881 from 28 games (with a highest score of 94*, including 6 fifties, at an average nearing 34, having struck 102 boundaries) and clinched 10 wickets, thus far.

Without a doubt, the White Ferns will count big on the capabilities of two undisputed greats of their game. But Devine, in particular, would be expected to go all guns blazing, especially after having blasted 769 runs in the WBBL 2019 edition, on the very Aussie pitches she’d been walking out to bat in the days ahead. Talk of familiarity in conditions!

Moreover, her brilliant, undefeated streak versus the Proteas recently- that yielded 3 fifties and a career-best of 105 (off just 65, a strike rate of 161) would give credence to a team that has several other experienced batswomen.

So who are they? How do the other batters fare in T20Is?

Dangerous wicket-keeping batswoman Rachael Priest, 34, first debuted 2007 and has since then, gone on to collect 813 runs, striking 1 fifty, maintaining a strike rate of 103 strike. That she’s closing in on 1000 runs should keep the right-hander in good stead.

Then there’s Katey Martin, another very experienced keeping-batswoman and a fine timer of the ball who’s been around in T20I’s since 2008. She’s played 74 T20s, as on date, from which she’s struck 773 runs, including 4 fifties.

Then there’s the dangerous striker of the white ball in Maddy Green, who’s most sparkling cricket moment, it could be said, came during 2018’s ODI versus Ireland wherein she powered a whirlwind 62-ball ton in NZ’s magnificent 490 run total.

So how does the White Ferns bowling unit appear for this T20 World Cup campaign?

In these games, the White Ferns would undoubtedly rest on the medium pace talent of the experienced trio of Lea Tahuhu, Sophie Devine and Suzie Bates.

Three of their most experienced custodians of fast-bowling would carry the hopes of the Kiwi campaign. And the expectations are not irrationally placed either.

Now when you put the trio of Devine, Bates, and Tahuhu- you get a fiery troika that’s played 255 T20s and clinched 186 T20 wickets together.

That said, most noticeably, the White Ferns have picked two uncapped players for the T20 Women’s World Cup campaign- in Lauren Down (24 yrs) and Amelia Kerr’s sister Jess Kerr, a 22-year-old medium-pacer who marked her debut against the Proteas Women in the 2020 series.

But that’s not all. Devine and Bates will be further accompanied by several support bowling options in the following:

Holly Huddleston – the 32-year-old medium-pacer has played 15 matches, from which she’s clinched 13 wickets at an eco of 5.3. Previously, she was used as a support bowler to Tahuhu during the 2017 Women’s 50-over WC.

Then, there’s the 27-year-old Hayley Jensen, who’s known for her penchant for mixing up the pace of her deliveries. The medium-pacer, who first played a World T20 in 2014, has played 23 T20Is, from which she’s taken 16 wickets, although at a high economy that’s nearing 7.

Wellington Blaze’s Jess Kerr, meanwhile, will hope to learn from an experienced medium pace department whose top-lining stars, undoubtedly, are Bates and Devine.

Finally, there’s Leigh Kasperek, the Scottland-born off-break spinner and handy middle-order batter who happens to be among the best spinners in the women’s sphere.

The 28-year-old boasts of an exceptional record wherein from 36 T20s, she’s emerged with a fine tally of 60 scalps. What’s more?  An economy that’s just above 6 isn’t too bad just as her bowling figures of 4 for 7, which came in a T20 World Cup match against the redoubtable Aussies back in 2016.

Foxy and clever, Kaspererk can deceive with flight and throw in the quicker spinners too.

Thus, in a nut-shell, let’s summarize the White Ferns’ unit’s exposure to the T20 game:

That being said, several of White Ferns members in this current squad have previously featured in past world cup editions.

Have a look at:

The unputdownable duo of Bates and Devine has starred in all previous editions and will now be preparing to enter their seventh World cup tournament.

To sum it up, 4 members of the White Ferns’ current squad have featured in 4 of the 6 editions held so far while 3 players have starred in 5 editions.

But a poor tally of 29 runs- just 29- fails to convey her real skills with the bat.

That being said, here’s a glimpse at how the White Ferns fared in the last World T20 edition

In the last World T20, held in the Caribbean in 2018, New Zealand, who missed reaching the semis of the tournament, won just 2 games and lost as many.

They lost to Australia and India while beat Ireland and Pakistan.

In the games they lost- vs Australia- Bates was in form making 48 of her team’s 120 runs while Martin made 24. Devine and Kasperek removed half of the Australian side, the spinner taking 3.

Against India – Bates top-scored again with a 67 off 50 as Tahuhu picked 2 wickets.

Against Pakistan- Devine, Bates, and Martin made most runs with 32, 35, and 29 respectively, contributing to the team’s 144. Tahuhu and Amelia Kerr would later take 1 and 3 wickets, respectively as Pakistan would bundle out for 90.

Against Ireland- Kasperek, Tahuhu, and Kerr shared 7 of the 10 wickets among themselves as the bespectacled off-spinner clinched 3 on her own to skittle Ireland for just 79. In reply, Devine stroked 7 fours and 3 sixes to snub their opponents inside 8 overs. The smashing batswoman made 51 off just 22.

For all their strength and experience, and their penchant to play aggressive cricket, it would be a real surprise if the White Ferns failed to progress beyond the group stage. The least they’re expected to do is to launch themselves attackingly into the semi-final stages and then build further. 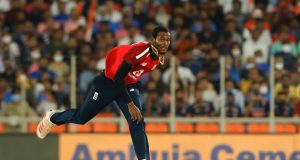 Jofra Archer- The Tenacious Young Bowler With A Mighty Heart

Pranay Rangra - April 1, 2021
2
Martin Luther King once said, ‘I have a dream that my four little children will one day live in a nation where they will...