A 6 off 10 in the first T20. It was, needless to say, a horrible show with the bat on a day where South Africans, playing in home comfort, capitulated to 89 against Australia.

Next up, a 37 off 26 balls- including 2 sixes and as many boundaries- a knock that starred in South Africa darting an equalizer at Port Elizabeth.

What a welcome relief from the abominable show at Jo’burg it was- wasn’t it?

Finally, firing the lion’s share of runs in team total that resembled the size of a mouse. Rassie van der Dussen scored 24 off 19 as his team made another embarrassing total of 96.

RVD, as he is famously known, has been a shining light especially in a phase where his Proteas are desperately battling darkness, some down to their own players’ performances, many others stemming from administrative problems as one has come to see.

But what makes Rassie van der Dussen an important force suddenly? Let’s not forget that this is someone who burst on the scene only 2 years back in time.

We are at Centurion.

A 20-year-old was performing the duty of change room attendant for the South African team that consisted of some of the greatest names of South African cricket history.

The boy was aiming to plight his trade with these great players.

Truth be told, can one imagine the side rebuilding and regrouping under Quinton de Kock minus a batsman who, in his very first Cricket World Cup appearance fired 311 runs, including 3 fifties?

How often do talents come along that blast a strike rate of over 90 in their debut World Cup outing? Not just that, how many batsmen can you recollect for having fired runs at an average of over 60 in their first world-cup assignment?

But does that make Rassie van der Dussen infallible? Surely, Bess, Wood, and Curren. They’ll tell you how they prompted the right-hander to offer his wicket.

Yet, what we mustn’t neglect is that van der Dussen, not the most aesthetically pleasing batter is someone who can wither away storms.

It’s not an ordinary day in England. Suddenly, batting first, it’s raining runs for the Proteas, who’ve until such time, batted without customary fire.

Next up, we see Faf raises his bat, gets to his deserving ton, the only by a Protean on the forgettable competition and the very man he labeled would ‘carry the team ahead’ ends up 5 shy of what would’ve been a fitting debut world cup century.

Rassie didn’t bow down to Starc. He charged down the ground against the likes of Starc, Behrendorff, Cummins. Above anything, he stars with 95 runs in a 151-run stand.

Today, Rassie van der Dussen is now a vital player and as per Faf du Plessis, his role will be very important for South Africa in building a strong team for the future. You don’t doubt someone like a Faf with his insights, someone who took over the reins during the most challenging phase for the side in the aftermath of AB’s retirement.

Things have never come easier for him, it has taken years for him to win the elusive Test Cap he always dreamt for. It came on the back of stellar performance in the shorter version, where his success made it impossible for the selectors to ignore him further.

While South Africa suffered one of their worst years in Test cricket, where they lost to Sri Lanka by 2-0, from India by 3-0, before succumbing to England by massive 3-1. Rassie van der Dussen was among few bright spots for what was a forgettable series for the home side. His innings of 98 at Wanderers showed what South Africa need currently.

However, the journey has never been a smooth one for the right-hander.

After starting his career with Northerns in 2008, he decided to move from Pretoria to Potchefstroom in 2012 as his opportunity with Northerns was limited only to red-ball cricket and he never wanted himself to limit to one version of the game. At North-West, his new team, he showed some immense amount of promise with 952 runs at 63.46.

However, even this consistent performance was not sufficient for him to break in a strong South African team.

It was only his extraordinary performance in Mzansi Super League (MSL) in 2018, which helped his side Jozi Stars winning the title that won him the spot in the national team against Pakistan. Since then, he has become a vital cog in the South African middle order, scoring 707 runs in 21 matches at 70.70 and with 7 half-centuries. At a time when South Africa has started its mission 2023, RVD can be a crucial player who can provide much-needed experience in the South African middle order.

Van der Dussen got his chance at the age of 30, while the wait was highly frustrating and sometimes it cast doubt on his own ability, whether he was good enough to break into the national team. However, on the other hand, it also proved to be beneficial for him because by the time he came into the team, he was well aware of his game, his strength and the weakness and that reflected in his game as well. He might play the role of a senior statesman for the team at a time when South Africa desperately needs such figures to hold up the team and guide them.

The period over the next 12 months will be very crucial for South Africa as they embark on some crucial assignments. Series against West Indies, Pakistan, Sri Lanka, and Australia and a T20 World Cup will test the team. It is then that Van der Dussen will emerge a key player in the team’s plan to turn the fortunes of the country’s cricket.

On the personal side, Rassie van der Dussen would desire to emerge as a key dependable force quite like Michael Hussey, who was also a late bloomer and could stretch his career well into the late ’30s. 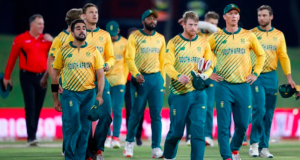 Pranay Rangra - April 20, 2021
0
‘When it rains, it pours’, this saying is more than apt for the current state of South African Cricket, drenched in the rain of...