Faf represents records and runs both, both coming often not in the best of circumstances. Quinton has proven dexterity; as good with the gloves as he’s with the bat. The sooner he establishes a legacy as a captain, he’ll be a trident. AB’s got a fan-base that doesn’t discriminate between geography. Nortje and Pretorius are offering hope of a future thanks to the promising show against England. What does Heinrich Klaasen- often in-and-out- from the side have?

Well, don’t go beyond his unbeaten 123*. We know the impact of the massive effort at Paarl. By now, fans would know the minute details too.

But what do we know about Heinrich Klaasen that draws eyeballs as much as it merits greater attention?

It was exactly 2 months to date at Paarl- the venue for the Transvaal-born’s carnage-that Heinrich Klassen was contesting the Mzansi Super League final. There, he was captaining the Tshwane Spartans against the Faf du Plessis-led Paarl Rocks when the news broke to him that he was left out of the Test squad for the inbound tour of England.

This despite being a part of the test squad that toured India.

Well, the news wasn’t something he was hoping for and his dejection showed in the way his team lost to the Paarl Rocks in the final. The only positive in this gloomy episode was the selectors telling him, he was still on the national radar but had to go back to the domestic scene and score a lot of runs. Well did he do that in style to earn his place back in the Proteas setup for the T20s against England and Australia and then being the centurion to take the Proteas to a win in the first of the 3 ODIs against the Aussies?

Heinrich Klaasen was born in Pretoria and followed the footsteps of the great De Villiers and Du Plessis to make his mark in the local franchise team the Titans. Working under the astute leadership of coach Boucher at the Titans, Heinrich has always been the guy who takes the game by the neck rather than letting the game come to him.

His patience to read situations, mixed with his aggressive stroke play makes him a fine middle-order player. What’s more, he gives the added all-round option of being the reserve keeper also in the side.

Fast Forward to yesterdays, ODI against Australia and the Proteas were in early trouble with 3 down for almost nothing. In came Klassen to support the debutant Kyle Verreyne and together they struck a cautious partnership on a slow surface.

After Verreyne was dismissed, Heinrich Klaasen and Miller set up a daunting total for the Aussies to chase which eventually resulted in a Protea victory. The reason Klassen’s 123 was so special yesterday was despite only playing a handful of games for the Proteas and in the absence of seasoned greats like Duplessis and the ever-reliable Van der Dussen, Klaasen held his own against the mighty bowling attack of the Australians and did not seem perturbed one bit with everything the likes of Starc, Cummins, Hazelwood, and Zampa threw at him. After he got to his ton his expression and the loud cry of belief showed his eagerness and determination to make it big at this level.

What made this 100 even more special was that in the recent uncertainty of the Protea performance, a man has shown the right path for the entire team to follow at least for now.

One hopes to see more such fantastic innings to take the Protea legacy forward from the classy Klassen. Surely Heinrich is Proteas’ hero today and shall hopefully remain in the times to come. 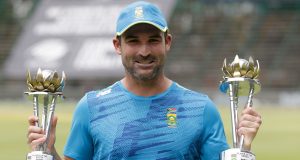