Not once since 2014- where as semi finalists they marked their best performance yet in the Women’s T20 World Cup – have the Proteas Women managed to go beyond in the pinnacle of women’s T20 contests.

In some ways, the must-win game and make no mistake- that’s also for England- the Proteas Women in the T20 World Cup face a do or die.

Should they win, they’ll be but a step away from eventual glory; seeking the coveted title, something they haven’t yet managed. Yet it’s something they can claim given their passion and unquestionable persistence, as seen so far.

But should they fail to succeed- they can step away and reflect on what has truly been a remarkable series.

Not because the Proteas Women seemed slightly underwhelming when one took into consideration the heavyweights around them- Australia, New Zealand and India, according to the pecking order called rankings.

But because given their recent T20I form where barring a lone victory in the 5-match T20 series in New Zealand, South Africa just didn’t seem to pack the right punches.

And it’s precisely in that remarkable change in fortunes, exemplified by the form of Proteas Women in T20 World Cup 2020- where so far they haven’t put a foot wrong- that Australia should, at least, ponder about the side they are about to face, if not shudder in fear facing.

So while the number crunchers and those buoyed by the “Aussie” swagger will bat for Lanning’s team in the big clash up ahead, wonders, how many would commit the harakiri to undermine a team like South Africa?

Truth be told, the sentimental narrative already alludes to the triumph of the team whose cricket epitomizes the beaming positivity of a Rainbow.

That all 11 bring an undoubtable essence of camaraderie spurred by this uncanny consistency that their opponents have failed to upset makes the Proteas Women in T20 World Cup 2020 the side to beat.

On top of that, what the Protean fan would desperately want from its much-loved team is for them to settle a score with the sharks of international cricket.

Even before they reached the business end of the T20 World Cup 2014- it were Australia who halted the victory march of Proteas women (the eventual semi-finalists).

Restricting the side led by Mignon du Preez for a paltry 115, a total none saw coming, Lanning’s side in just the fourth game of the Bangladesh-hosted event, to score a 6-wicket win.

Not that things changed drastically in the next edition of the premier event.

It was business as usual for the Australians come 2016.

In another group- stage heartache for South Africa, the batters struggled, much like their last meet against the Aussies, managing just a 102. Was it even going to be enough for a Healy, Perry, Lanning and Schutt-powered side?

A blinder from the captain culminating in a 19-ball-30 saw Australia rush home with 9 balls to spare.

Lanning had roared against an attack featuring some of the finest exponents of the white ball- Luus, Khaka, Kapp, Van Niekerk and Daniels but a knock powered by 5 boundaries and a strike rate of 157 did the Proteas in.

What lies ahead here at the business end for Proteas Women in T20 World Cup 2020?

Thus, among the things the Proteas women would be desperate to avoid would be running into their 2016 oppressor: Meg Lanning- who combines a wealth of experience and a dash of charisma as yielded by her prolific run-making abilities.

The 2 T20 tons and a T20 average of 35 plus offer valuable insight into the mind of the great destructor. That her side is the host should definitely caution the Proteas Women against taking her lightly. On top of that Lanning’s team hampered by Perry’s exit will want to make an impact as they’ll go all out in their efforts to make good for what’s clearly an irreplaceable act.

At the same time, depicted by the undeniable form of the Proteas Women in T20 World Cup 2020, the current side will look to topple the mighty Australians putting all that flair and power – so hard to evade if you followed the series – to good measure.

Now that Lee’s bat has hammered the white ball with customary might(notching up the enviable T20 ton), Wolvaardt placing her credentials beautifully through that gutsy fifty (off just 36 balls v Pak), with Van Niekerk, Luus and Mignon – in the T20 form of her life- batting as good as they ever have the runs should come with Protean quintessence.

That they’ll have to navigate the testing waters of an attack boasting of the top-ranked T20 bowler in Schutt with Jonassen in the form of her life should make the excitement of watching two vastly powerful sides a palpable one!

That being said, as the Sydney Cricket Ground becomes the cynosure of all eyes interested in the women’s game and cricket’s temporary residence for the next 24 hours until results are out- perhaps- you should spare a thought.

You should spare a thought to celebrate the unbridled passion with which South Africa- who’d hit the rock bottom against the White Ferns prior to this mega-event wrecked England (massive favorites still to reach the finals), dislodged Pakistan, boxed the Thai, and watched their only chance at beating Stafanie’s Windies washed out by the rains.

And it is in this hunger to express themselves, an effort that has birthed this World Cup’s finest juggernaut that one can see the Protea fire.

The spark that binds the cricket fan; the feeling that makes the non-South African vouch for the team from South Africa, regardless of where one may be.

Whether it is in the backfoot punch to the covers by Laura Wolvaardt, the flighted one by Sune Luus, the one smashed over mid-wicket by Tryon or in the pure smile of Mignon du Preez.

Time for Van Niekerk’s eleven to take their game even higher. 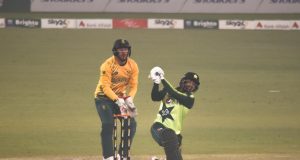 Pranay Rangra - February 15, 2021
0
Last evening a beautiful Gaddafi Stadium in Lahore covered by a blanket of fog With dusk seamlessly transitioned into the night sky, saw the...