Ever heard of the phrase “seeing both sides of a coin”?

In his teenage years, Alex Carey played both Aussie rules football and cricket much like any boy growing up in Australia would. But as he got older and the time came when he had to opt one out of the two, he chose football and started to play the game at a higher level. He played for Glenelg in the South Australian National Football League reserves competition alongside adults by the time he was 15. He continued to make leaping progress and by 2009 he had played for South Australia in the 2009 AFL U-18 Championships in addition to winning the SANFL reserves title with Glenelg. He even turned down a rookie contract offer from the South Australian Cricket Association and moved out to Sydney in order to join Australian Football League‘s new expansion club – the Greater Western Sydney Giants.

Carey not only captained his team in the inaugural season but also led them to the finals alongside winning the team’s best and fairest player award. But things started to fall apart for Australia’s would-be wicketkeeper from then onwards and by 2012 he was dropped from the squad when his team was promoted to the Australian Football League.

The drop saw him return back to South Australia as the door for a career in football seemed to have closed behind his back. But as saying goes, when one door closes another one opens and it was cricket that embraced him back with open arms.

Glenelg Cricket Club was his new home where he started off as a specialist batsman and a successful one indeed, boasting an average of close to 50 in all formats. His rip roar form with the bat warranted his first call-up to South Australia and soon made his List A cricket debut in a Ryobi Cup encounter against  New South Wales followed by a first-class debut. But his start in the higher leagues was dismal, to say the least as he averaged only 10.1 runs in six innings and would eventually face the axe.

His failures as a specialist batsman made him revaluate his choice. He would soon switch to a wicket-keeper alongside moving down the batting order, a decision that cooked the elixir for the revival of his cricket career. After a couple of record-breaking seasons in grade cricket in his new role, Carey received a call back to play for South Australia in the final four rounds of the 2015–16 Sheffield Shield season.

Having seen promise and indomitable talent, South Australia offered Carey with a senior contract in the 2016-17 season and boy did he deliver. In one of the most productive seasons by a wicketkeeper in Australia, he became just the fourth player in history to post 500 runs with the bat and affect 50 dismissals as a wicket-keeper in a single season following the footsteps of Chris Hartley and Adam Gilchrist. He also ended the season with 59 dismissals, a record for a wicket-keeper in a single Sheffield Shield season.

Fast forward 17 January of 2018 – Carey hit his first Big Bash century when he opened the batting against Hobart, earning himself an ODI debut at the Gabba just two days later. The next month, He made his T20I debut for Australia against New Zealand on 3 February 2018.

Things would go from good to better for the gloveman as he was awarded a central contract by Cricket Australia for the 2018-19 season. The icing on the cake came when he was named the vice-captain of Australia’s limited-overs sides the same year.

Having played cameos here and there, Carey broke through for Australia in the 2019 edition of the ICC World Cup. He smashed 375 runs at an enviable average of 65.50 striking at more than a run a ball, the highest among by a Number 7 batsman for the tournament.

Delving deeper into the woods, it becomes evident how crucial a member Carey turned out to be for Australia.

With a dodgy middle order, the men in canary yellow were almost always in trouble towards the end of an innings and that’s where Alex Carey as a number 7 came as a blessing. Often he had to come in dire situations with his team eyeing a below-par score and dig them out of the hole to safety.

Mind you, Alex Carey wasn’t always the batsman he proved himself to be in the World Cup. He didn’t quite fit the mold of a typical finisher. In the ODIs, he batted in the upper-middle order while in T20s he flourished as an opener. Such batting positions provided him with the luxury of spending some time watching the ball, nudging it into gaps for singles and unleashing with full power once he had dug his foot deep into the ground.

For a batsman of such modus operandi, number 7 is a bit unjust. Not just for the batsman but for the greater good of the team as well. Sure he boasted outrageous stats at number 7 in the world cup but that gives us no reason to believe that a move up the order wouldn’t do him any good. As a matter of fact, he is most likely to soar even higher and realize his true potential at a higher batting order. His recent woes in the ODI series in India as well as in the recently concluded T20I series and first ODI in South Africa is highly indicative of that.

With the constantly evolving nature of modern-day limited-overs cricket, Australia have shown appreciable flexibility with the way they have utilized Glenn Maxwell.

On numerous occasions, he had been promoted up the order and asked to hike the scoring rate. But the explosive willow-wielder has endured quite a rough time doing the job. He has quite often either failed to steady the innings or bat till the end.

The same goes for all-rounders Marcus Stoinis and Mitchell Marsh.

Not to mention Ashton Agar and Ashton Turner.

With that end in view it isn’t a crime to wonder why Alex Carey shouldn’t be Australia’s number 5, is it? Not only would that grant him the luxury of operating on his manual, but also reduce the responsibility on the out-of-sorts Glenn Maxwell. 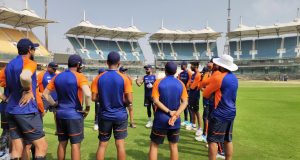 Roadmap for Team India: What Lies Ahead In 2021

Sahil Jain - February 2, 2021
0
2020 was a strange year by all means. Cricket was affected in entirety in India and for Team India, in particular. But now that...