Only a few hours remain in the ICC Women’s T20 World Cup 2020’s mega-clash. The iconic Melbourne Cricket Ground (MCG) and March 8: India and Australia are occupying the highlights on the occasion of International Women’s Day.

So before the big clash begins, let’s do a quick rewind to understand how did India’s journey begin; what were their trials and tribulations.

Both teams were placed in Group A. And they met in the tournament opener on 21 February where, perhaps amid a surprise to many in the host nation, Team India emerged as the winner. While India remained unbeaten so far, the opening match loss remains the only loss for Aussies in the tournament.

However, Australia were dealt a big blow as star all-rounder Ellyse Perry hobbled off the field during their match against New Zealand after getting a hamstring injury. She was eventually ruled out of the tournament but the hosts registered a convincing win against South Africa in the semi-final by five runs via the Duckworth Lewis method.

India, on the other hand, faced trouble against the Kiwis, but bowlers did well and handed another win. However, their semi-final clash against Heather Knight’s England was called off due to rain and as a result, they reached the final on the virtue of finishing as the table topper.

Bowlers star for India against Australia

Australia won the toss and put India to bat on a slower surface. India managed 46 runs in the powerplay and they were reduced to 100-4 by the 16th over, courtesy Jess Jonasson’s stunning spell. However, Deepti Sharma’s unbeaten knock of 49, led the visitors to 132-4.

In reply, Alyssa Healy and Beth Mooney got off to a steady start, but Mooney departed in the sixth over off Shikha Pandey. However, Healy scored a fifty and Ashleigh Gardner’s 34 was the highlight from them.

From being in a sure win position at 67-3 in the 10th over to losing seven wickets in a quick span in the last 10 overs, with Poonam Yadav (4/19) and Shikha Pandey (3/14) doing the main damage as India started their campaign with a 17-run win.

The Indian bowlers once again stepped up in their second group game against Bangladesh. India got a blow before the game, with Smriti Mandhana being forced out of the game due to viral fever and 16-year-old Richa Ghosh replaced her in the squad where wicket-keeper Taniya Bhatiya opened the inning with Shafali Verma.

While chasing, Shamima Sultana fell in the second over off Shikha Pandey. However, Sanjida Islam and Mushida Khatun steadied the ship with a 39-run stand before Arundhati Reddy removed Khatun in the eighth over.

The game against New Zealand in the ICC Women’s T20 World Cup 2020 became a nerve-wracking for India as the youngster Amelia Kerr nearly pulled off a victory. The Kiwis won the toss and put India to bat where Smriti Mandhana got out very early for 11 by Lea Tahuhu. However, Shafali Verma played a steady knock of 46, adding a crucial 51-run stand with Taniya Bhatia.

However, Kerr dismissed Shafali in the 14th over and India managed to put up 133 on the board with the loss of 8 wickets in 20 overs.

While chasing, the White Ferns were restricted to 77-4 within 14 overs. Then came the ultimate surprise – Amelia Kerr (34), who nearly turned the table for the Kiwis.

They needed 16 off the last over where she hit Shikha Pandey’s first ball for a boundary courtesy Jenson’s thick inside edge. While nine runs needed from the final two balls, Amelia Kerr hit a scoop, which went past the short third man for another four.

In the final delivery, Pandey gave a yorker as Kerr tried to replicate her previous shot again. The ball hit the pad and they tried to take two runs but Jenson ends up getting run out. India cemented a place in the semi-final with a narrow three-run win.

The Indian bowlers maintained their top form in the final game as well where Sri Lanka won the toss and elected to bat, but that certainly didn’t go well with them as they were restricted to 113-9 from 20 overs.

Shafali Verma once again failed to score a fifty as she got out after scoring a quickfire 47 before getting run out in the 10th over. Mandhana (17) and Harmanpreet Kaur (15) failed again, but Jemimah and Deepti Sharma (Both 15 not out) took India to the finish line with more than five overs to spare. With this, India finished the group stage unbeaten.

The first semi-final between India and England was washed out as the rain played the spoilsport at the Sydney Cricket Ground.

Whether India, to this point, consider themselves a tad bit fortunate- we don’t know.

What is known is that this a team that loves a good contest and possesses everything in its might to make a big-match a thrilling one.

Surely, given there was no reserve day allotted for the semi-final, India may feel that destiny was its good friend in enabling it to reach the final.

But then, fortune always favors the brave, right? 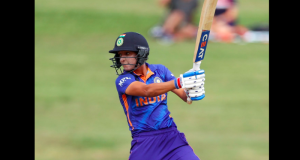 Harmanpreet Kaur On Her Way To Script A Bold New Era...

Saksham Chugh - July 28, 2022
0
It was the semi-finals of the Women's Cricket World Cup 2017, and India were facing the mighty Australians. The game was reduced...