Up to this point, one doesn’t know whether it is first-time finalists India or hosts  Australia who are experiencing the nerves for the ultimate contest in the Women’s T20 World Cup 2020?

Could it be that it is both? But how’s that possible?

Frankly, knowing their penchant for a good fight, India- who, never in the six previous editions reached the concluding stage of a Women’s T20 World Cup- would’ve ideally loved their arrival a semi-final win before arriving into the finals.

Sadly, in rain-torn Australia, that wasn’t to be.

That their last game was easily over a week back wouldn’t inject the team with a great match practice especially vis-a-vis Australia, who were playing a contest only 48 hours ago.

Moreover that India didn’t get to play a semi-final clash while Meg Lanning’s eves had to fight to their last bone in order to come on top of theirs must serve the latter’s confidence right.

At present, nearly everywhere on Twitter’s landscape is an Indian eyeball more likely to bump into the #GoAussie hashtag than ever before.

To many, it may simply be a marketing ploy to gather views. In reality, it’s a warcry.

It’s a call to action directed at a unit of consummate cricketers whose performances on the ground are going to reverberate around the world, cajoling not only the hearts of fans. But are expected to uphold the legacy of giants such as Faith Thomas, Karen Rolton, and Belinda Clark- glorious contributors to the legacy that’s Australian Cricket.

Surely, India, howsoever accustomed to pressure and setbacks will want to reflect on their journey. Anyone who thinks theirs has been a very easy path- for they’ve won all games they played- couldn’t have it wronger. Not only were 2 of their premier batters out of form, but this team has made it to the final stage of the competition minus timeless greats- Jhulan Goswami and Mithali Raj, who aren’t around in this format anymore.

Australia would take due note of this feat.

It’s an achievement of sorts.

They know what major absences mean, for they are sorely missing Ellyse Perry. At the same time, the mighty side know the value experienced players bring.

That told, are missing something?

Is that all that might have crossed Meg Lanning’s mind?

Wouldn’t Australia, who’ve lost a game insofar while their opponents haven’t, experience the nerves for also being the hosts?

Losing in a bi-lateral series held at a neutral ground is an easy setback to overcome. It happens to the best of us.

It occurs all the time.

Ireland have just lost to their hosts Afghanistan in India.

It can be said with surety the passage of traffic leading to the Greater Noida stadium wasn’t encircled with protesting fans from Belfast.

The West Indies were clean swept by Sri Lanka (playing at home) for the second time in a row, in ODIs, following the 2015 rout.

There’s amity and usual nonchalance back in the Caribbean.

But it appears, for Australia, there are mighty ramifications for the simple reason that a lot is at stake in the T20 World Cup 2020 finals.

For starters, imagine the magnitude of the achievement they’ll get their hands around, provided they manage to lift the trophy for a record fifth time, amid hundreds of thousands in the finals of Women’s T20 World Cup 2020?

That no one else barring Australia has even managed to lift the crown twice while Lanning’s girls have worn it already on 4 previous occasions with customary flair makes the event a special one.

And that when you’re hoping to #FillTheMCG only heightens the thrill at just what’s on stake.

But there are a few concerns that warrant some quintessential Australian responses.

This whole hullabaloo of being the giant killers in the biggest stage, yet one who were deflated in their very first Women’s T20 World Cup 2020 contest; how does that make the team feel?

That Australia are up against the very side that dented a hole in their Titanic-sized vessel would only heighten the expectation of seeing what lies ahead.

Yet, can India allow themselves to remain shut-eye on the one major question none seem to be asking:

What if Shafali Verma – not so soothing a site for medium pacers, one in deadly form- fails to fire and walks back early?

What is Harmanpreet’s contingency plan?

Yet, all of that said, what better occasion for among the widely hailed batters from India roaring back to form?

That this was the only standalone Women’s fixture should also offer the ladies pride as much as it should push experienced (but as seen so far, inconsistent) batters- Healy, Veda, Mandhana, Harmanpreet- to score a big umbrella of runs for their respective teams.

That said, we’re all set and ready to go.

Let’s fill in the MCG. 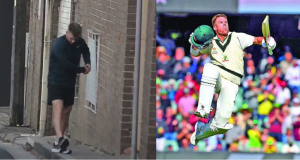 David Warner – From Swinging Hands In Sydney Streets To Darting...

Ashish Kumar - December 1, 2019
0
Ball-Tampering, was a term that haunted David Warner every second of his life since the one year ban from international cricket. It's a term...