Amid all the much-needed talk and rightful hype resting with several series’ that are currently on in different parts of the world- Australia having just run into a resurgent South Africa, India preparing to tackle the Proteas, the West Indies fresh from a whiff of much-needed triumph down in Sri Lanka- the onus is returning to the game’s shortest form. And needless to say, the form’s famous sporting franchise- the IPL.

But in a world where MS Dhoni, Kohli, Pandya, Pollard, Parthiv, Chahal, Deepak Chahar, Iyer, Pant, Watson are usual heroes- could it be that there’s someone who’s often not talked about in great length. Yet, someone whose time, it seems, may have come?

Fondly remembered by his blistering 21-ball 45 run knock against Rajasthan Royals, Sarfaraz Khan, at 17, was the youngest cricketer to be featured in the Indian Premier League. That particular knock, what was his only fourth match in IPL, made him an overnight sensation.

While the Mumbai batsman came into the spotlight in that particular edition of the cash-rich league, he had done enough damage earlier to make his way into RCB. At just 12 years of age, he came into notice of many when he broke Sachin Tendulkar’s record, piling up 439 runs in his maiden Harris Sheild game in 2009.

A raw talent was unleashed; another Mumbai batsman was rearing to make a mark on the biggest stage. Getting his name embarked on the prestigious Wisden cricketers’ Almanack at just 15 years of age, Sarfaraz was definitely the one for the future.

Consistent performances at the junior level helped him fetch a place in the under-19 team in 2014 and mind you, he was just a 15-year old kid at that time- a testimony of Sarfaraz’s class and cricket acumen.

The Mumbai batsman scored 211 runs in six games at an average of 70.33, including two half-centuries.

Coming back to his first IPL Season, Sarfaraz had a decent run, scoring 111 runs in 13 games at an average of 27.75. The following year saw him play his second under-19 World Cup. He enjoyed another stellar run, finishing as the second-highest run-getter in the tournament. He scored 355 runs in six innings which was laced with as many as 5 half-centuries. Obviously, one would have thought that the door to the Indian Cricket Team wasn’t too far away.

THE FAIRYTALE RUN FOLLOWED BY A DOWNFALL

“Just when you think everything is going right for you, things start to move into different directions.”

The next IPL season saw him play only five games for Royal Challengers as fitness issues came in the way of his prodigious batting ability. Lesser opportunities both in IPL and Ranji Trophy meant things were not the same as they were used to be for the Indian cricketer.

“I used to set a lot of expectations for myself and I have often got hurt because of that. It has been a topsy-turvy journey so far. A few years back I was selected as the youngest player to represent India under-19 World Cup side. Then I became the youngest player to play in the Indian Premier League. But sometimes you don’t get the opportunities to play consistently for the team. I expected too much out of me but that eventually hurt me. And then I told myself not to expect anything out of life and whichever comes my way hereafter will be like a gift from God.” Sarfaraz said in an interview with Aakash Chopra.

“Only people in the UP team will be able to tell you why they were not giving Sarfaraz enough opportunities. We went there to play, but nobody told us why we didn’t deserve to play,” Sarfaraz Khan’s father was quoted as saying in CricTracker.

THE RESURGENT SARFARAZ WHO MEANS BUSINESS

Come 2019 and we saw a resurgent Sarfaraz who meant business. His back ft punches were crisp, the cuts were flamboyant. It was indeed his best IPL season so far. Playing his second straight season for Kings Eleven Punjab, Khan amassed 180 runs in 8 games at a stellar averaging 45 in the 12th edition of the cash-rich league.

The “unexpected gift from God” showered his way as he got opportunities in the 2019-20 Ranji season as well with a few senior players being unavailable due to professional commitments. The 22-year old made full use of it and piled a host of records to his name.

He started with a brilliant half-century and had no looking back from thereon.

He notched the second-highest score in first-class cricket batting at number six, scoring a monumental 301, followed by an unbeaten double century. Much to the delight of everyone, his unbeaten run continued until his 78-run knock in the next test which followed thereafter.

Overall, Khan accumulated 928 runs in only nine innings with an astounding average of 154.66, the best this season.

There’s is no denying the fact that the 22-year old cricketer still has a lot ahead of him and the upcoming Indian Premier League could well be a turning point in Sarfaraz Khan’s career. Today, he would look to put all disappointments behind and establish and earmark himself as one of India’s most exciting prospects.

That he’s got age and importantly, the enthusiasm to score and make it count should hopefully keep Sarfaraz Khan right on the onlookers’ alley. 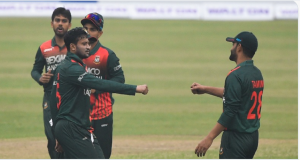 A Sensational Comeback In A Low-Key Series: The Pitch Is Where...

Dev Tyagi - January 20, 2021
0
A comeback is not a comeback unless and until you demonstrate something great. And that great could be in a normal routine game or...