Comedies may be rewatchable. Dramas are, well, dramas, at the end of the day.

But mystery films keep us engrossed. There’s the unquestionable element of a thrill if executed well.

Moreover, the general human tendency, it’s been found, is to remain captivated by the probability of the unexpected.

Long before Gone Girl, there was Psycho.

Before The Girl With The Dragon Tattoo, there came Rear Window.

Perhaps, of the many analogies that one likens cricket with, there’s a hugely appetizing one that belongs to the realm of cinema.

It’s a figure that looms large on the 22 yards. It hunts and more often than not, obliterates in both broad sunshine and under the moonlight.

It can be seen but not arrested.

It has been charged with execution, the fictional world’s equivalent of murder.

But is yet to be convicted. May never be if it stays true to its instinct of attack.

The mystery spinner has done a lot more to the sport than its given due credit for. For starters, he’s subverted the fireworks sparked by batters.

This is quite a feat in a game often called out for being skewed to the batsmen’s favor.

And a nearly incalculably talented one hails from Afghanistan, a team that excites.

Also, a team is already growling. And given the way it is shaping, may roar, sooner than later, on the world stage.

For they’ve not been able to stand up to his frontal, very ‘on your face’ attacks.

His weapon of choice is off-spin.

But he excels in delivering the Doosra and the straighter one. He also puzzles with the Carom ball that loops and ultimately outplays the batsman.

At 19, he’s already considered one of Cricket’s highly skilled and motivated killers.

Batsmen haven’t been able to put a finger on his mystery. And given he’s got time and the ‘will’ to hunt for many many years, it doesn’t see that good news for what lies ahead.

Some of his famous assaults have been against some of Cricket’s big legends.

While most dread facing up to Chris Gayle, Afghanistan’s prodigy got the big man out in a series where it mattered most, probably a contest as big as the World Cup; the 2019 50-over WC qualifiers.

It was to have been an off-spinner. Instead, it turned oddly, as a googly.

In the final of the World Cup qualifiers, West Indies ran into a tall mystery.

Perhaps befittingly with Ian Bishop behind the mic, West Indies remembered a name- Mujeeb Ur Rahman.

Few months down the line, he got Kohli.

Oddly enough for the man they call the King; the one bowlers develop anxiety facing, embarrassment came at the behest of a beautifully tossed one that came into Kohli, breaching past the wide bat and pad gap.

For someone who just completed his 19th year on a planet he’s enriching through sheer talent, Mujeeb Ur Rahman is yet to fully transition into a man.

Maybe that makes his success even more engrossing and others’ weaknesses against him telling.

To a side that now has the likes of Karim Janat- a fine medium pacer who found the West Indies wanting in the T20 series at Lucknow- one already powered by Rashid and Nabi, Mujeeb is a blessing.

More than just being a threat.

It allows the team to rotate its bowlers, it being armored by an army of spinners that despite a modicum of international experience are already emerging as bullies.

Neutralizing the game powered often by the antics of big hitters and dependable batsmen.

How often has world cricket seen a sight where a teenager opens the attack for a side that has a superstar in Rashid Khan and almost instantly puts pressure on the opposition through dot balls?

Let it not be forgotten that a teenager armed with an experience that’s that of an ant puts brakes on scoring challenging batsmen of far greater assertion and elephant-like experience.

In the recent T20s against Ireland, at Greater Noida, 2020, and the ones before against West Indies, at Lucknow, 2019, Mujeeb captured 7 from 6 games.

Well, while 5 came against the Irish alone, the 2nd and 3rd T20s against the Windies saw him concede 10 off his 3 and then, just 9 in the decisive contest off his 3, including 1 wicket, respectively.

Cricket, if you come to read it, plays like Math. But you have to read between the geometric arrangement of lines and numbers.

That’s not a lot.

But when you realize Mujeeb Ur Rahman’s wicket tally is only 12 shy of 100 international dismissals, having collected 88 whilst bowling on only 58 occasions (T20Is and ODIs included), you warm up to this potential threat that’s spreading like a contagion.

Much regard must also flow to his penchant for tedium despite growing up in privileged surroundings.

While much of his teammates practiced and arose from war-torn playgrounds, not knowing a thing about luxury, Mujeeb Ur Rahman had the privilege of knowing financial stability and the joy of going to a cricket academy where he was helped to hone his craft.

Yet that very comfort that he had it much better while others in his team didn’t back then should arrest our attention to the zeal of this rising spin bowler for he could’ve just sat back and taken the lazy way out.

The society has revealed that those who’ve seen financial woes are far more resolute to succeed.

But what about this teenager who had it all, yet endeavored to work just as hard as others? 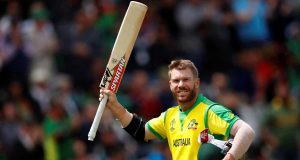 While All Our Attention Was With Virat, Gayle, Kane, David Warner...

Bhavesh Bhimani - June 22, 2019
0
Cricket can be a greatly unforgiving game. But it also gives opportunities to stand back up after pushing one down. In March 2018, David Warner...