“Kids, don’t take up sport. Take up baking or something. Die at 60 really fat and happy”

These were the words of James Neesham as he stood at the receiving end of what was a heartbreaking loss in the World Cup final. Sports can inculcate a variety of emotions. Tears of joy and happiness to moments of sadness, anguish, and pain. While it was a tough defeat to handle, Neesham during this phase had proved his potential in both departments.

Popularly known for his humorous personality on social media, things started to take a turn for Jimmy Neesham at the start of 2019. All of a sudden, it was the bat that started making the noise. A comeback into the New Zealand side after more than 18 months, one had felt a bit of nervousness creeping in.

New to the crease with the hosts at 322/6 and just two overs in hand, it was too less of a time to make a difference. Thisara Perera was having a good day with the ball before he has summoned to bowl the penultimate over. What followed was him being greeted with four consecutive sixes at the hands of a strikingly fascinating all-rounder. If things weren’t already worse, a waist-high no-ball to make it 27 runs from the first four balls. The fifth delivery was deposited on the roof by Neesham.

He couldn’t do a Yuvraj Singh but that was some reckless stuff by the all-rounder on a comeback. He finished things for the Kiwis in style with a six in the final ball of the innings as New Zealand posted 371 on board. 49 of those coming in the last two overs, courtesy of Neesham’s 13-ball 47* whirlwind, closely missing out on registering the fastest fifty in ODIs.

It was time to strike with the ball and he didn’t disappoint. With Sri Lanka off to a stellar start, the right arm pacer applied the brake to their innings as he sent both the openers back to the pavilion in successive overs. He later even got the better of Dinesh Chandimal to end with figures of 3/38 in his eight-over spell. On a day when the scoring rate was above 7, Neesham did a fine job conceding at 4.75 per over.

In the next game, he backed it up with another spectacular all-round performance. Scoring a splendid 64 runs from just 37 balls and then picking a couple of wickets. Neesham had not only announced his arrival in style but made a solid statement for the World Cup selection which was just months away.

Not everyone gets the golden opportunity just months before the World Cup and to grab it the way Neesham did was exemplary. His significant contributions had rightfully earned him a flight ticket to England and represent his nation at the pinnacle of world cricket.

Come the World Cup and Jimmy Neesham began with a bang. His five-wicket haul startled the Afghans who had come into the tournament with an aim to surprise a few of their opponents only to find him at their fury. With the bat, he continued to lift NZ up in the early stages of the tournament with small cameos at the lower order.

The display of character may be manifested in the great moments but it is made in the small ones.

Against Pakistan, the Kiwis found themselves in a spot of bother at 46/4. A sincere effort by Jimmy Neesham who batted according to the situation. So far in the tournament, he had managed to garner the reputation of a pinch-hitter. Here, he ensured that Shaheen Afridi who was on a rampage didn’t manage to cut through their tail.

That was highly noteworthy in how he paced up his knock. In the first 56 balls, Neesham scored just 24 runs. In the next 56 balls, he racked up 73 runs to finish with 97 not out. A knock that rescued the Black Caps from an embarrassment from 83/5 to 237/6 in their 50 overs. He couldn’t register his first century but garnered a lot of accolades for his proficiency.

His magic with the ball continued as he regularly found himself amongst the wickets against Australia and England including the final. Third highest run-scorer as well as wicket-taker for his side in the World Cup, Jimmy Neesham proved his versatility in both departments.

“I just ticked over 29, and I’m at the stage of my career where I feel like I’ve started to get things together.”

Such words can give any captain a great deal of confidence. He’s surely a great asset to any side he turns up for.

Jimmy Neesham hasn’t played Test cricket for a while now but it’s interesting to note that he had a dream start in the traditional format back in 2014. Consecutive centuries in his first two Tests before everything went downhill for him. At the moment, his focus will be to become a mainstay in the limited-overs setup.

However, Neesham hasn’t been able to replicate his fantastic run from last year. The all-rounder has again struck a poor patch with a string of low scores against India. The positive thing is that he’s still on the selector’s radar. It’s high time he displays his aura with the bat and ball before it’s too late.

It will be a while before cricket starts all over again after the Novel Coronavirus Pandemic which has brought the whole world to a standstill. 2019 was finally the year where Neesham progressed a step ahead and proved his worth. He has to take the momentum from the same and start performing.

The 29-year old has it in him to become one of the best all-rounders in world cricket. Certainly not a Jacques Kallis, but surely someone like a Shane Watson. With the ICC planning to come up with a tournament every year, Neesham has every chance to prove himself at the bigger stage. We have all seen the skills he possesses in his armory.

A proven match-winner on his day. Has the knack of breaking partnerships with the ball. Can go bonkers with the bat and even recover his team from an early slump. He surely ticks all the boxes as an all-rounder but can he do it consistently? Well, that’s a challenge that lies ahead of him.

If Jimmy Neesham manages to overcome it and stand apart, then nothing can stop him from being one of New Zealand’s most decorated fast bowling all-rounders after Chris Cairns. But will he? 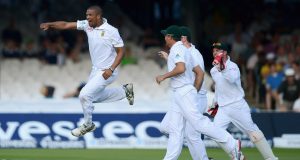 Bhavesh Bhimani - July 31, 2017
0
We often speak about Pakistan cricket’s ability to churn out raw pace sensations literally out of the blue. In fact, we tend to get...