Well, here’s a bit of truth. Kim Garth was merely 14 when she first took to the very sport that often comes with a disclaimer: “This isn’t child’s play.”

How fitting it is then that an avid youngster holds the key to Irish women’s cricket today?

It was back in 2010 when one of Dublin’s finest, a truly dependable force first picked up the white ball as also the willow.

And in what can only be called very productive and exhilarating years spent on the ground, Kim Garth has risen as the go-to specialist for one of Cricket’s exciting sides.

And today, with 85 games against her name- it seems she’s hardly broken a sweat, always appearing as someone tireless and willing to endure, each game followed by another.

As the women’s game’s template is getting ever so better, Kim Garth has a simple job to do, yet one that can be onerous and exhausting.

Where it stands today, Ireland, a trove of interesting talents, have to dig deep to lift the mantle of the team in order to become what they truly can and must; a daunting force in the game.

Nothing would lift them as much as emerging as a side facing which even established teams feels, “this isn’t going to be easy.”

Just as it never is, when Kim Garth pushes every single vein to extract bounce and generate movement of the pitch.

Be it on a flat deck or a green top.

In the years that lie ahead, it’ll be engaging to note how Kim Garth can inspire her captain and lead her team to some uplifting performances.

In a team that possesses versatile talents- the likes of Eimear Richardson, Delany, Sophie MacMahon, Gaby Lewis- where there’s both youthfulness and a dash of experience, Kim Garth’s presence fires an equalizer of sorts.

She’s someone who fits into the playing eleven akin to tea in the morning kettle.

That she commands but never boasts of an almost decade long stay in the game wherein she’s locked horns with the biggies is the stimulant Ireland need to regroup once again in their bid to get back to winning ways.

What can be more meaningful than having a zealous all-rounder lead the way?

For as it is, all-rounders possess what can be called the yin and yang of energies, the dexterity to produce magic with dual skills.

And Kim Garth- an unassuming but quality all-rounder- does that with the focus of someone for whom cricket seems like everyday meditation; like a process without which one just can’t exist.

You see that every now and again when she runs into bowl wearing the famous orange jersey for Perch Scorchers.

You see that every time she livens up the game in her nation’s green colors. 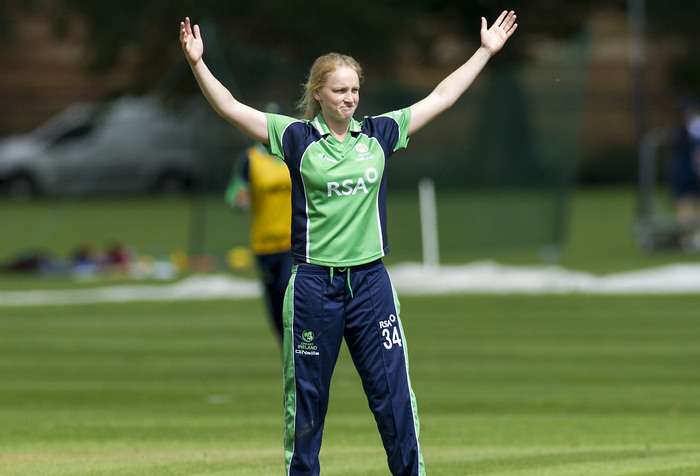 There’s an unabashed expression of energy and pure passion that flows in the beautiful follow-up to a long rhythmic action and the full swing of the bat and the copybook forward defense.

Nearing 500 ODI runs (just 30 innings) and 800 T20 runs (46 innings), Kim Garth is like the bright ray of sunshine that Ireland need to pack a furious punch with the bat.

Like her treatment of anything bowled short and around the off, spinners or pacers it doesn’t matter.

Someone who prefers to put her strengths to judicious use whether she’s out there amid an inning collapse having to play the repairman or challenging quality batters with the zipping pace.

Thus far, Kim Garth has done plenty of that with quintessential poise and the Irish effervescence- of digging in deep to produce well-meaning efforts.

Exactly 76 international appearances old in the game but all of 24- let that sink in- Kim Garth has removed batswomen on 65 separate occasions, collected best figures of 4 for 11 and 3 for 6 in ODIs and T20Is, respectively, and in having done so also accumulated, and on times, carved nearly 1200 international runs.

What shines brightest on that resume is what can be called the commendable bowling economy- under 4.5 in ODI cricket and well under 6 in T20s.

Duty-bound, patient, watchful, and a staunch observer of the game- this medium-pacer can easily become the hitter down the order and the useful wicket-taker up front who can hold onto her own by sticking to an end.

In an age driven by excesses, Cricket so often longs for talents who maximize discussion with quality and prefer to keep it simple, opting for honesty in the age of histrionics.

If you couldn’t imagine the Irish game back then in the absence of the famous Joyce sisters, reading into the side today without Garth, who last starred in a big win against Papua New Guinea courtesy a run-a-ball 29 and 2 for 15 (from 4) to set up a big win in the ICC World cup qualifiers- can be hugely underwhelming.

Imagining Ireland without Kim Garth can probably be likened to witnessing a game of cricket minus the DRS, having to see a batswoman walk into the middle without proper gear, or if one must confess, then an umpire without the hat.

Certain things, let’s just put it, are necessary, very necessary, and quite unimaginable to the great game.

Guarding the open spaces in the outfield with a strong arm and proving to be the overpowering force with her nagging pace and economical spells featuring a sense of discipline, here’s an all-rounder who loves to back the girls in her set-up, often opening her heart to uphold talents alongside her, such as her passionate support of Gaby Lewis, whom she regarded as the big positive in what was a disappointing ICC World T20 2018 campaign.

But at 24, you’d feel Kim Garth is only getting better, with hopefully so much of cricket lying ahead of her.

To a cricketing culture where some exceptional figures of the past include the Joyce sisters and Clare Shillington and Heather Whelan, it’s all down to this big impressive ‘present force’ of Irish cricket to forge an exceptional future. 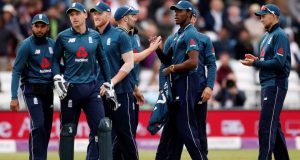 Why England, Purely On Numbers Seem Incredible, Unbeatable For CWC 2019

Siddharth Sharma - May 30, 2019
0
In a game that asks questions constantly of its talents, there's one that the fan can't deny or avoid, for its a constant query: Will...