Oh, what a wonder of the sport.

The beaches with the breezy weather.

A hint of Reggae in Cricket or the meaningless of finding Cricket without reggae?.

Those majestic grounds whereupon historic figures- or original masters of Cricket, if you like- roamed about akin to deadly dinosaurs of the Jurassic era.

The Prince of Trinidad with Ambrose and Walsh.

The West Indies- what a decline and fall from grace.

The West Indies- a steady indication of the creation of a new future.

Always better than a ‘walk-back’, even if toward the glorious time of the yesterday.

The countless parties under the sun, and at times, amid the sands, all of that during the T20s.

Someone else in there too?

Your idea of the perfect rendition of West Indies bears a striking similarity to Bob Marley’s urgent call to action.

In “One love,” he wasn’t just singing, he was sweetly asking everyone to come together and unite for a cause.

Isn’t this unparalleled love we have for the West Indies makes them what they truly are?

Something that captures them truly; the greats they once were, the lows to which they fell, and the glorious hints at a revival they keep displaying.

The world’s greatest desire, it’s often seemed, is for the West Indies to return to former glories.

No one hates the West Indies. And you could be anyone.

But are the hints at the big revival we’ve witnessed- especially from the onset of 2012- whether evident in the T20 series win in Sri Lanka, in the two World Cup titles, circa 2012 and 2016, the spectacular fan-following in T20 leagues only due to the batsmen?

Modern cricket will understandably side with T20Is and ODIs as the driving forces that serve the need of the hour: something the fans seek and TRPs function on.

But if you are to be taken seriously, then you cannot eschew the idea of excelling at the Test level.

And someone’s driving a change in the very format where a Sabina Park, the Queen’s Park Oval, or the Kennsington Oval had been struggling with empty seats, especially since 2013.

The crowds are beginning to fill in.

When the red ball is in the hands of Shannon Gabriel, the outcome on the pitch seems to become the weather prediction on an unusual day.

The most certain prediction and the outcome are thunderstorms and lightning.

Of the kinds that took Sri Lanka by utter surprise at the Beausejour Stadium, during the Second Test.

In response to Lanka’s 253, wherein Chandimal stroked a fine 119, Shannon Gabriel responded with 5 wickets in the first inning.

Up next, post-West Indies’ reply of 300, Sri Lanka were quick to respond through a typically gutsy 342.

But they would’ve wanted to make more. Plenty more.

Just that they ran into one man.

Or should it be said, one man, delivered them a footballing-equivalent of a header, buttressing them with 8 for 62?

In what was a perfect display of bowling in tandem, Shannon Gabriel left his red-ball partner Roach with little to do.

How often has the contemporary fan seen four other bowlers, three of whom are genuine wicket-takers- Holder, Bishoo, and Chase in this case- go wicketless?

It took Shannon Gabriel in his finest moment of a relatively experienced career just 20 overs to dismantle Sri Lanka.

Probably inside a fortnight, Gabriel and Roach changed their focus. A new enemy had descended on Caribbean shores.

And in what turned out to be a black-wash of Bangladesh, the first for a side featuring a legend in Shakib, the focus was on Antigua Test.

In their most regrettable outing, that yielded no more than 43, Bangladesh were first knocked down by Roach’s 8-for and later, by Shannon Gabriel’s fifer.

Tamim, Mushfiqur, Shakib- the mighty trinity- reduced to the size of a raisin staring at a sugarcane tree.

The bounce, the carry, and the purchase that only a ruthless fast bowler can get on a surface that also assists batsmen- a century by Brathwaite and a Hope fifty were struck on the same wicket- Gabriel had it all.

To a team that likens itself to a mighty brigade of power hitters, Shannon Gabriel provides the firepower in the department that exists to oppose those holding the willow.

From a traditional standpoint, it’s a big responsibility.

The enormity of Gabriel’s tas; to do to West Indian fast bowling what the “mighties” in Roberts, Garner, Holding, Marshall did back then; is daunting.

Yet it’s a proposition worth taking, a challenge worth attempting.

Moreover, the results, if achieved, can turn it around for the team’s leading custodian of red ball pace bowling.

At 32, Shannon Gabriel- 133 wickets, including 5 fifers from 45 Tests alone- can either wither away quietly as have many great West Indian fast bowlers, who came, were conquering, and then went astray.

Think of Patrick Patterson, whom Michael Holding regarded as ‘the fastest I’ve seen.”

In that regard, think Gabriel, who’ll soon play his 50th Test.

Together, the onus is on the duo to outdo imagination.

Unlike his close-friend Roach, who varies his pace and is more rhythmic, Shannon Gabriel hits the deck hard.

But can he be the fiery Ambrose to Roach’s Walsh?

While you can spot that quintessential aggression and an appetite for a challenge, the same series where he committed the hara-kiri to go for a shot when he could’ve defended Yasir Shah, Gabriel collected 15 Pakistani wickets and bowled 117 overs (2017-18).

Yet, all at the same time you can spot immediate realization; the disgust following delivering a loose delivery way outside off the same way a quicker one around good length turns the Trinidadian into a chest-thumping decimator.

Surely, the yardstick for Test ‘greatness’ will occur when everyone whether- Warner to Finch, Smith to Morgan, Williamson to Guptill- will be dislodged from the crease.

Though, those opportunities are yet to happen in aplenty.

But from what we’ve seen- in battles with Virat, Pujara, Misbah, Babar, Stokes, Cook, and the likes- the tally of 24 wickets against Pakistan and 26 against England do not disappoint.

In that sense, given pacers are a vulnerable lot, ever-susceptible to recurring injuries that only hamper longevity, Gabriel’s dedication to self-preservation must be lauded.

He’s never salivated after playing the odd T20I. Nor has he ran blindly after money in freelancing leagues.

Someone who wears the whites proudly and doesn’t mind getting muddy in the process of waging an attack for his West Indies.

Are the good times back, West Indies?

We don’t know yet. But that efforts in 2017 and 2018 collectively produced 71 of those 133 wickets points to a thrilling film that lies ahead, with hopefully no anti-climax.

Keep coming at them hard, oh mighty pursuer of the West Indies. 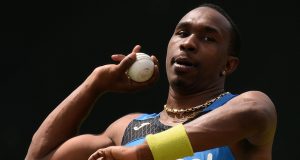 Away from on-field action, Bravo turns 34. Will West Indies recall...

Dev Tyagi - October 8, 2017
0
He is free flowing; clear-headed about what he wants from life- perhaps more than just hitting carefree sixes and taking absurdly difficult catches. His...