Much of Australia has seen large swathes of land being destroyed by fire.

The Bushfires- termed as Australia’s costliest natural disaster, as on date- have cost $100 billion worth of losses.

Animals have lost their kingdoms, and mankind much of clear open spaces.

Something has to be done.

It’s almost now or never. So the cricket community gets together to organize a fund-raiser.

And there we are.

Batting first, Ponting’s XI are somewhat struggling in the 10-an-over contest, at 53 for 3.

6 overs are done. Right then, someone walks into the middle.

The ball is thrown to Aussie great Elyse Villani.

On the first ball of the seventh over, a gentle nudge to the covers sees him off the mark.

Then on the fourth ball of the over, it’s magic.

Seeing the replay reveals, the head was straight, the body was leaning into the shot, and the weight had shifted effortlessly onto the front-foot.

So exquisite is the stroke that Villani, a competitor who hates conceding runs on a given day, actually breaks into a smile.

Brian Lara has truly arrived in the middle.

What follows then in an Andrew Symonds over is a straight hit down the wicket for a six.

And with that, the memories of the 375 at the Antigua Recreation Ground are revived.

Next up, a hit over extra cover. Another six.

The crowd is on their feet. In sunny Australia, the typical brilliance of Lara has united fans among grief.

The Wankhede at Mumbai is buzzing.

But it’s no IPL. It’s no mega ICC event either. Sachin Tendulkar’s Indian legends are squaring off against their West Indies counterparts.

And soon, with the score reading 40 for 1, inside the 7th over, a familiar figure occupies the middle.

Soon, a cover drive is blazed. What follows next is a typically flamboyant stroke fired down to mid-wicket.

One leg is up in the air as he fashions the hit, akin to a ballerina doing the Waltz.

You’re reminded of the 111 at Karachi during the ’96 World Cup when South Africa were sent packing.

He’s in a no-nonsense mood. Though the stay at the crease is short, it features 4 appetizing boundaries.

Yet, he’s managed to spike Irfan Pathan’s economy- which, at 10.5 an over from 2, doesn’t read that pretty.

But what remains unchanged- something that remained intact in those great days of the nineties- is the ability to find the gaps.

Mr. Tony Cozier wasn’t wrong whenever he said, “Lara’s found the gap with the precision of a mathematician.”

Perhaps, he would’ve said just that as Pathan was struck with peerless power.

Nor were those wrong who wielded a placard upon the completion of the 400 not out at Antigua Recreation Ground, in 2004- “Our wounds are healed!”

Brian Lara’s batting was such. There was a touch of class.

It’s exactly what was on offer whether at Melbourne’s meaningful cause or at Wankhede’s intense evening.

The greats, one may note, are often pushed by a certain cause. Aren’t they?

Sachin, it was clear, carried the hopes of billions. Dravid had a call to action when each time he went ahead to construct his wall of patience.

Ponting became, even more, attacking with the dominant Australians beside him.

Akram and Waqar were leading Pakistan’s charge in a time where the Ambrose’, Walsh’, McGraths’, Gillespie’ were the leading lights of their sides.

Both Kohli and Williamson happen to lead their sides. Hence the need to score is an imperative one.

So what pushed Brian Lara, who, even until recently, was going strong?

As if the occasion or reason to bat just didn’t matter at all? And the only thing mattered was to satisfy that insatiable appetite for scoring?

It may not be incorrect to say that no batsman was at pushed to succeed and as often cornered as the great Brian Lara.

As important as Lara’s great peaks were the circumstances in which they came- no?

Lest it is forgotten that his West Indies were 51 all-out at Trinidad’s First Test before Lara went onto change the very context of the series, with his 153 at Barbados.

Lest it is forgotten that before his 400 not out came in the middle of avoiding what would’ve been a dreadful whitewash – during 2004- his personal score was merely 36.

And on both occasions, the captaincy was at stake. As was the reputation and the very fabric of the West Indies cricket.

They had called out for his head to be chopped- angry and aggrieved with the way Caribbean cricket was spiraling down.

The man in whose captaincy the team had plummeted to a 5-nil drubbing in South Africa was at the brink.

What lay beyond was either despair or something sublime.

Yet, what we often forget is that in choosing the latter, Lara batted on with one broken finger during his 582-ball, 778-minute monstrosity against the English.

And whether it’s the final Test series- that yielded an emphatic tally of 448 runs versus Pakistan, in Pakistan- or that humungous output of scoring 40 percent of his team’s tally through 688 runs (3 Tests, in 2002) versus Sri Lanka, what we also forget is that Lara contested as a solo hero.

Yes, there was Chanderpaul.

But what were the odds for him to succeed if Shiv’s bat misfired?

At almost the same time, nearly everyone had a savior or two around. Didn’t they?

Sachin, with all due regards, had Ganguly and Dravid, and later, Laxman and Sehwag. Ponting contested with the Waugh brothers, Hayden and Gilchrist.

Kallis had Cullinan, Kirsten, and later, Smith and Amla.

But it was Brian Lara who hunted alone.

He wasn’t as fortunate to be amid a pride of lions.

Maybe which is why Lara’s ostentatious takedown of his victims is hailed legendary.

And maybe that’s why when each time one recounts the 375 or the 176 against South Africa, or even the 216 against Pakistan, we do not mind setting aboard the flight of nostalgia that goes ‘cruise-mode’ on the Brian Lara-land where hallmarks are anointed a legendary status.

Yet we often see and relish- as we must- the masterpiece at the end of the day, not so much the painstaking process in which the artist stayed committed for hours and hours together.

But suffice to say, implicit in Lara’s great peaks are the elements- the pressure, sweat, toil, grind- that made him worth everyone’s while.

The man who asked an innocent question with a fraction of smile- “Did I entertain?”

Well, Brian Lara- you still do! You do as much as you did then!

Happy 51st The Prince of Trinidad. 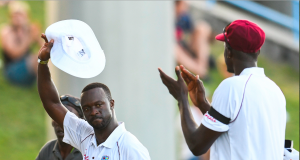 Unflustered, Unstoppable: The Legend Of Kemar Roach Unsullied By Bumps And...