One generally doesn’t doubt the greats of the game on their assessments. So recently when Michael Holding identified in the troika of Hetmyer, Hope, and Pooran, “the light at the end of the tunnel” for West Indian cricket, you thought he wasn’t bluffing.

After all, Shai Hope’s batting bears an imprint of class in a batting order made of big-hitters. You love it when Andre Russell turns on the heat. You love the fact that the current number. In Roston Chase, you feel West Indian cricket has finally found a glimpse at a successor of Shivnarine Chanderpaul.

Meanwhile, Gabriel and Roach remind you of the cumulative damage that Ambrose and Walsh so often wrecked opponents with.

But what does Fabian Allen mean to you?

What is it about the 25-year-old’s game that makes one feel he’s an important part of the current mix?

On immediate thoughts, there’s not an awful lot that a career with 14 ODIs and 13 T20Is can offer.

So in Fabian Allen’s case, it’s not how much he’s done so far but what he’s done that seems apt.

It was Chester-Le-street on July 1.

For Sri Lanka, it was an opportunity to advance to the semi-finals. For the West Indies, though, it was a dead rubber.

Holder’s team entered the contest at the back of consecutive losses against Bangladesh, England, and New Zealand. A washed-out contest against South Africa wasn’t any helpful.

These were desperate times. Something had to go their way.

But when the batsmen got going on a seemingly sedate pitch for the bowlers, it soon became clear which way the river was flowing.

Inside 16 overs, Sri Lanka were on 93 and going strong. Despite being 104 for 2 with Perera and Karunaratne back, Avishka Fernando and Mendis were at it.

Then, suddenly, the dangerous-looking 85-run stand was broken, just when it seemed nothing was going right for West Indies.

On the fifth ball of the 31st over, Fabian Allen delivered a low full-toss around the leg-stump, only for Mendis to hit it right back at him.

But there was a problem.

The slow left-arm bowler had bowled from around the wicket, which meant he was on the exact opposite side to which there seemed an opportunity.

But instead of making it look like a difficult one to grab, the Jamaican threw himself at the frail-looking chance, diving hurriedly to his right to take what you’d call a blinder of his own bowling.

Another well-set batsman was on his way.

Importantly, Allen had bowled the most economical spell for his team on that day.

Nonetheless, Sri Lankans compiled a hefty 338 and even to a side featuring Gayle and a fiery band of newcomers, it didn’t seem all that easy.

In the end, the West Indies, who sadly lost the top-three with a combined score of 45, hardly looked the part to spoil it for Sri Lanka.

That’s precisely where an unlikely pair of Nicholas Pooran and Fabian Allen chipped in.

You may have thought that with Carlos Brathwaite back in the dugout, the 6th wicket falling inside the 35th over, there wasn’t much cricket left anyway.

But Fabian Allen, who teamed alongside his explosive left-handed partner proved it otherwise.

What followed from the onset of the 35th over nearly up to the completion of the 45th, was carnage.

Just one word for it.

Sri Lanka didn’t see it coming. Probably, nor did the Windies fans. But no longer was the game a one-way street.

Soon, they crossed 250 with Pooran, closing in on a hundred and Fabian Allen batting fiercely.

Spin or pace, it didn’t matter to him; the crease was his home away from home

Then came the moment that probably even Allen didn’t wake up thinking about.

He completed a maiden ODI fifty off just 30 balls.

Imagine the occasion. Imagine what it meant for his team.

Severe against Udana and not even sparing Malinga, a full-range of strokes from the arc of mid-wicket to extra cover had been explored.

Many of his shots during that unbelievable lower-order fight that lasted for 32 balls featured proper cricketing strokes on the front-foot.

In all, his 7 fours and 1 six, and that strike rate of 159- the highest by any Windies bat that evening- indicated not just familiar Calypso power.

It amplified the substance a young West Indian brigade is composed of.

It proved that when most contend that it’s all over for the West Indies, guys like Fabian Allen prove it isn’t. And that the show must go on.

While Pooran got to a career-best and maiden ODI hundred, his valiance was as worthy of celebration as was the grind Fabian Allen set himself up for.

Just the way, he starred in another near-upset against the same opponents, although, this time on their own turf.

On March 1, 2020, when the West Indies needed a mighty 55 off the final 5, once again in pursuit of a mighty score, Fabian Allen walked into the middle with Pollard, Pooran, Bravo, Hope, and Ambris out.

There was no Andre Russell then.

But with 47 needed off 23, when the Sri Lankans would’ve thought that the game was in their bag, one man cut loose.

It wasn’t the experienced Jason Holder, a man with a personal best of 99.

It was Fabian Allen. First up, he slashed one bowled a bit outside off over extra cover for a six telling Udana that it wasn’t game over yet

Then, at 275 for 6 and Holder dismissed, he took it in his own hands to go for the improbable.

What followed next was a rampage. Sheer rampage.

33 were needed off 3 overs. The kind of equation only a Gayle can neutralize.

The man whose main craft is spin bowling took on the charge and carved 2 more sixes and as many boundaries, hitting all with overwhelming power to send Sri Lanka in a state of inadvertent panic.

He made it look easy, felt zero pressure.

All 3 hits covered a 95-meter plus distance. All this while, he was involved in two nearly morale-breaking run-outs, but kept going, taking his team within a 6-run distance from the 308-run ask.

From what appeared, surely this team isn’t the West Indian side used to meek surrenders of the past.

At the end of it, you wondered who was this guy at the crease?

Just some new spinning all-rounder or someone whose batting suggests a new-looking firebrand West Indies now have prolonged depth in batting?

We don’t know, your call. But a thing is certain.

The younger lot believes in taking games down the wire. And Allen doesn’t seem a pinch-hitter.

He applies himself, can hold on to an end.

It’s those vital runs desperately needed down the order that often matter. And he has shown he can get them.

The point now is- can he lead to a big difference?

One reckons, in Fabian Allen, there’s hope that games can be won when you feel all’s lost.

That miracles do happen on 22 yards.

He is no ‘flash in the pan’ cricketer.

Rather someone, who immediately announced he means business upon his debut T20 game.

That was against India, in 2018, where the most runs in an otherwise disappointing 109-run total came from Allen’s bat. 27 of those, way more than what the quartet of Ramdin, Hope, Hetmyer, and Powell managed.

Imagine what Fabian Allen can achieve with a bit more coaching and personal guidance- if someone took him under his wings?

Coach Simmons, are you listening? Dear Cricket board, can you rally around this exciting new find too? 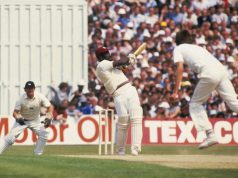 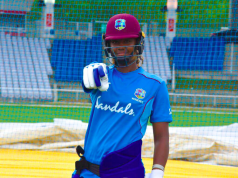 May 29, 2019: When A Storm Called Hayley Matthews Crashed On Ireland 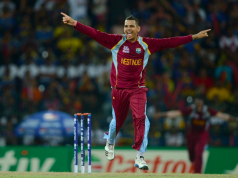 Who really was Courtney Walsh- a big talent or a special...

Gopalakrishna Pai - November 1, 2018
0
Great fast bowlers hunt in pairs. Sometimes they don't. They don't have to. They are blessed to march on alone, to soldier all alone. Imran Khan didn't...