In February 2017, India and Proteas Women teed off for an important contest. The cause was big; there being just one goal for both: to qualify for the mother of all sporting battles: the 2017 Women’s 50-Over Women’s World Cup.

Australia and England had already made it.

But there could’ve only been one winner, obviously. Batting first, the Proteas Women put on 244 on the board. Not the greatest score in the world, but, a competitive one, at the end of the day.

A batting line-up replete with the 20s, 30s, and 40s, an important contribution came from the lower-order.

The Proteas no. 6 stayed put on the crease for 7 overs and contributed with a very respectable 37. Against Pandey and Gayakwad, bowling at their peak on a placid wicket where the ball didn’t come that easily to the bat, this wasn’t a minuscule score.

Perhaps a shot that made the highlight of that inning was an attacking cross-batted heave fired over mid-on, off Shikha. A lofty six on a wicket that demanded everything from the batswomen.

Later, as the Proteas got the dangerous Kamini early, Deepti Sharma and Mona Meshram dug in. By the time it was the 32nd over, India had put 140 on the board.

It was clear where the game was headed. Then a straighter one pitched at good length breached the defenses of the well-set Mesharam. The timber was disturbed, India lost their second- highest-scorer and a certain leg-spinner had broken the 124-run stand.

But Harmanpreet Kaur chipped in and in the end, even as the bowling side took the game to its final over, India prevailed. The difference, in the end, was a 1-wicket win.

A quarter of a year later, South Africa locked horns with India again, at Leicester. The contest even bigger in proportion to the previous one.

The Women’s World Cup 2017. It couldn’t have gotten bigger than that.

But the wounds were yet to heal. Batting first, South Africa, guided by a big knock by the ever-dangerous Lizelle Lee put on 273 on the board. Lee took just 65 balls to up the ante.

But after the middle-order responded rather sedately, it all boiled down to that familiar figure at number 6.

And boy, she responded! What followed was an attacking 57 off 66. And when India came out to bat, they were dealt an early on just the second ball of their inning.

But again, there blossomed a stand that threatened to take the game away. The order of the team’s batting ditto with the February contest, the key figure in the partnership, back then as also, in this case, the same: Deepti Sharma.

All South Africa craved was a breakthrough. And there it came. Raut lost her stumps to Khaka.

But at the other end, the dangerous Deepti Sharma was still there, unbeaten on 60. More importantly, the big shark Mithali Raj was in the middle.

Then, on the second ball of the 12th, anticipating a big turning leg-break, Mithali Raj found her stumps bamboozled.

In a battle between the captains, Dane van Niekerk had the final say.

No other bowler had, until then enforced a golden duck from Mithali save Dane van Niekerk. Two balls later, Dane Van Niekerk sent the one batswoman most are afraid to bowl to but never confess.

Harmanpreet was caught defending the wrong line, yet another non-turning leg-break found the way to kiss the stumps.

Not only that, but the prized wicket of top-scorer Deepti Sharma also went to the leg-breaking magician; someone who did it all; flight, turn, deceive; all with a sense of daring and guile.

At the end of 46 overs, Leicester was on its feet, South African flags fluttering everywhere and in the presentation ceremony, Dane van Niekerk played another captain’s inning where she proclaimed, “First of all, this goes to Lizelle Lee, I think she deserves it more than I do.”

And you thought, isn’t that what defines a true captain; someone who keeps nothing for the self but dedicates pretty much everything to the other?

Frankly, South Africa seem safe on Dane van Niekerk’s watch. In her absence, they crave the balance she contributes, never with chest-thumping arrogance, but with a quiet sense of determination.

Around half a year back, a Dane Van Niekerk-less South Africa traveled to India and nearly lost all T20s. You could tell the magic of leg-break was missing. You could sense vital runs from up the order were utterly lacking.

But make no mistake. Van Niekerk’s success is not a “flash-in-the-pan” occurrence.

It boils down to years of playing back-breaking and fiercely committed cricket. Nothing of which could’ve come early since Dane van Niekerk was a teenager when she cut her teeth in international cricket.

In the summers of March, ’09 when a young zipping leg-break bowler walked the turf at Newcastle, challenging the West Indies.

It didn’t take her long to signal her indication; that ballsy quest to contribute to South Africa’s cause. In an important World Cup contest, it wasn’t Westhuizen or Ismail but Van Niekerk who removed the top-scorer from West Indian camp.

With all three stumps shattered, Daley with her 26 was on her way back. Dane Van Niekerk had arrived.

The years that have followed since read more like a timeline in the fairytale career of one of South Africa’s most vaunted prodigious talents.

In January 2013, she became the first-ever Proteas women cricketer to take an ODI hat-trick.

In 2017 again, she doused herself in an illustrious bit of history, that too in an important World Cup game against the West Indies women.

In a ripping spell of 3.2 overs, she bowled 3 maidens whilst taking 4 wickets.

4 wickets inside 3 overs signal something special. Just that Dane van Niekerk didn’t concede a single run back then, making a disparaging mockery of the West Indians.

Stuff that Shane Warne would be proud of. A feat that everyone, whether Yuzi Chahal and Adil Rashid would love to bag.

But all of that said, what matters in a 12-year-long stint for Dane van Niekerk more than any other smashing career highlight is the highest summit to which she can take South Africa’s flag.

So that it can flutter with pride, feathered by her selfless efforts.

In so doing, she’s also correcting major wrongs. In February 2020, she oversaw South Africa’s first-ever win over England in a World T20 stage.

In the very contest where the evergreen Mignon du Preez held her nerve to dart a majestic six over mid-wicket off Katherine Brunt, Dane van Niekerk anchored the run chase with a gutsy 46.

A few hours back, she removed Knight and Wilson in her 2-for.

The answer to a pantheon of greats in world cricket: if Australia have Lanning and Perry, India have Kaur and Smriti, and New Zealand Bates and Devine, then in the tireless services of Dane van Niekerk the Proteas Women have the fuel to run many a mile.

Just how many make it so far and so early in their career? 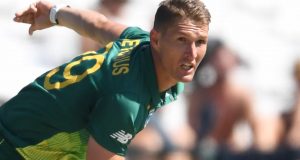 Pranay Rangra - March 30, 2020
0
The Dwayne's, often spelled differently, are an interesting lot in cricket. If you are a West Indian, you begin to dance like a champion upon...