Is the greatest thing about Cricket just the unbelievable matches and records?

What good is the sport in the absence of fans who never part with the heroes and keep alive the significance of different eras?

If you were to ask devoted fans what they miss most about the game today, then probably eight in ten may say the Nineties.

You really meant it when you called someone a great during that period. Moreover, you didn’t meet any kind of retaliation in doing so.

Probably, it had something to do with several iconic figures existing at the same time.

Lest it is forgotten that Sachin Tendulkar was the foremost hero before Kohli captured our imagination. And that there was Brian Lara before Shai Hope’s batting reignited faith in West Indies again. Also Kallis arrived before AB did, just as Jayasuriya kicked up a storm before Sangakkara appeared.

But where it comes to Pakistan Cricket, let there be no doubt that there was someone called Saeed Anwar who made his own place among many greats of that time.

In an era where Sachin Tendulkar and Brian Lara dominated the discussion regarding who was the greatest of that era, Saeed Anwar contributed in a unique manner.

Using usual elegance, here was a man who beautified an important art that can so often be brutal. What Jayasuriya and Afridi did with power, Saeed Anwar did with enigmatic ease.

The man who carried forward the legacy of the David Gower and Dilip Vengsarkar- school of elegance.

The man with a silky touch and feel for the game.

But interestingly, it was on this very day, 23 years back in time that Saeed Anwar did something unusual.

In some sense, the general cricketing rule is that you bat in the manner you are accustomed to.

For instance, Lara, throughout his career, played in an attacking fashion. Didn’t he? There are shades of habitual flamboyance in that 375 just the way there are in that 153*.

Dravid continued to play watchfully. He built his “Wall” on patience and watchfulness. Sehwag didn’t deviate from his usual modus operandi: see the ball-hit the ball. Also true for Gayle.

But when Saeed Anwar hit his 194, Cricket’s highest individual ODI score back then, he married elegance with attack.

It was an occasion as rare as seeing an archbishop overseeing an inter-racial marriage.

Just that the result of that communion- it nevertheless being an appetizing run-fest- was too brutal a blow for the one who opposed it.

While it took Pakistan to 327– not the kind of score that was gettable in those days- India did well to reach 292.

Not one but two hundreds were struck during a run-fest witnessed at Chennai on a dramatic day-nighter. Dravid’s 107, an early indication of his resolve at number 3, highlighted India’s valiant response.

But only one knock, as it turned out, held the decisive edge.

And while 9 centuries weighing over 194 have been stuck ever since, none have seemed so relevant to the game as Saeed Anwar’s effort.

To a generation that often suffered from a sort of short-sightedness, often choosing not to exist beyond the Lara and Sachin- universe, the 194 proved to be a turning point.

It made the fan sit up and take notice of a left-hander who was both dogged and beautiful to watch; someone who just wouldn’t get carried away after he had his eye in.

That man who dismantled Australia, at The Gabba, with a defiant 119, a few seasons after freeing his arms in that volcanic eruption at Chennai.

Cricket reserves a special fondness for openers. Right from Sir Gavaskar‘s days to those of the Universe Boss, the openers have been offered a Red Carpet treatment, something the middle order workhorses work hard to match.

Just that when Saeed Anwar opted to bat until the death overs, clubbing 118 of his 194 runs purely through hits to the fence (22 fours and 5 sixes), he proved that the respect was well-earned and highly-deserved.

After all, here was a man who held onto his own against an attack featuring Prasad, Kumble, and Kuruvilla.

The absence of Srinath may surely have hurt India. But could it have been any easy to send Kumble for 58 off just 9 overs? How easy could it have been to brave humidity, muscular pain whilst batting for almost an entire inning, having opened it?

A batsman of a certain flair here was someone who opened the floodgates by finding the gaps. Someone who believed in the art of timing.

Batting often looked like a divine art form, the language the batsman corresponded fluently in when someone like Saeed Anwar was on song.

Probably the phrase ‘on song’ comes to depict Pakistan’s genius and one of cricket’s hugely undersung characters the best.

Just that on that fateful day for India, Anwar decided to sing in a different tune. It was catchy, but it often shrugged melody and opted for bass guitar ditching the usually soothing saxophone.

And you have to admit it wasn’t all going Pakistan’s way when Afridi, who opened then, departed for 5 with the score reading just 8.

Although, Rameez Raja chipped in with a steady knock, departing not before taking the score to 98. But from that point on, it was all Saeed Anwar.

You distinguish a good inning from a great one basis its statistical output. But does one need to sing any more praises upon realizing that the next best score post the 194 was Ijaz’s 39?

The glowing off-drives, the powerful pulls, the trademark hoists over the mid-wicket and square leg region, Saeed Anwar launched a scud-missile in Sachin Tendulkar-land.

Long before the Chepauk turned into CSK’s yellow, it was once painted all green by Saeed Anwar bashing the blues out of the ‘Men in Blue.’

Yet, he also served an important reminder that one could convene over a magnanimous record with grace without making a huge hullaballoo about the feat.

Saeed Anwar’s gentle mannerisms despite becoming the holder of what was then the game’s highest individual ODI score (before Sachin broke it in 2010) showed that there was never a need to make a village roadshow out of a truly intense rivalry.

Surely, opponents like Sachin have fired equally resolute knocks against Pakistan, picture the 97 in the World Cup.

But there’s a distinctive appeal in that Saeed Anwar peaked a rare feat with both great hunger and grace; a feat that stood supreme for 13 long years.

And must we also thank him for adding a layer of mystique through that craftsman-like approach to batting.

And probably it’s not irrational that the fan misses the era where cricket knew how to exist minus things like a ‘send-off’ or a needless altercation.

An era where suave stylists like Saeed Anwar not just Lara and Tendulkar lorded with elegance. 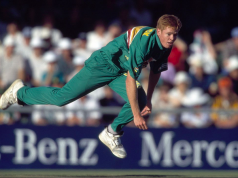 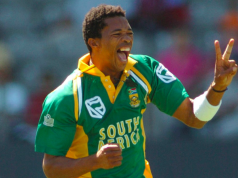 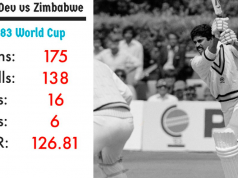 When Kapil Dev’s 1983 Heroics In His 175 Blanked Zimbabwe, Blazed A Trail For India In ODIs 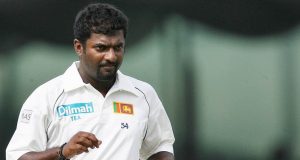 The Genesis Of Muttiah Muralitharan

Navid Khan - October 11, 2019
0
Every finite thing in the universe has a genesis. Be it the very world we live in or even the most complex of entities...