There is an old and prominent saying “Tough times never last but tough people do!” That resonates quite well with the story of this ice-cool Irishman, who changed the face of English cricket. Eoin Morgan’s cricketing journey started with the Irish when he made his ODI debut for Ireland in 2006 but this British passport holder by birth had only one massive dream growing up in Dublin, that to play Test cricket.

Three years after his debut for Ireland, with 23 ODI matches under his belt and a sum total of 744 runs at a healthy average of 35.42 it was in 2009 that Morgan decided to make a move that would help him realize his ultimate dream, that of donning the Test whites and thus he declared for England in 2009. 11 years later Morgan only has 16 test matches next to his name, but what life had in store for him was something he would have never dreamt off.

Two months before the biggest spectacle in ODI cricket, the Cricket World Cup, the then English captain Sir Alastair Cook decided to step down and Eoin Morgan was entitled to the honor of captaining the English side and lead them into a World Cup campaign. Morgan who had been around the English unit for quite some time had the experience but what he didn’t have was time on his hands to bring about his ideas and impose the brand of cricket that he would have had in his mind.

This eventually didn’t do any good for the English side at that point as they entered the World Cup undercooked and with a new captain who was still finding his feet. The exit in the league stage of the Cricket World Cup 2015 is still one of the lowest points of English cricket. Morgan was in a bad patch himself with the bat only managing to get 90 runs in 5 innings and to cap it all off was a loss to Bangladesh. England were devastated, to say the least, and Eoin Morgan the leader was being doubted.

Then the ECB decided to appoint former England Captain, Andrew Strauss as the team director, and the rest, as they say, is history.

One of the first and a tough calls Strauss had to make as the director was whether or not to stick with Eoin Morgan as captain in the limited-overs after a debacle of such magnanimity. It can be easy to look past someone who was in bad form himself and suffered a loss as significant as that but full marks to Strauss for sticking with Morgan and entrusting belief in, Morgan: The leader.

The biggest realization England made after that loss was to understand that they needed to look at White ball and Red Ball cricket with different perspectives. Morgan wanted England to be a side that would go on to play a fearless brand of cricket and this meant he had to look past some experienced Test specialists and bring about a change in the dynamics of the England side with some young guns in key positions. Morgan became vocal about introducing a white-ball contract system and Strauss obliged.

Morgan set the tone himself in showing the fearless brand of cricket he wanted to instill in that side. Morgan averaged 58 that year in ODIs and what stood out was the strike rate of 101.75 with 754 runs in just 14 innings. That was a start and a hint at what he wanted to achieve with English cricket. This paved the roadmap for every one part of the English set up which led to guys like Jason Roy, Alex Hales, Jonny Bairstow being expressive at the top of the order.

England then decided to bring out flat tracks at home to support their style of play and this started paying rich dividends. Despite Morgan’s below-par year in 2016, he had done enough in that first phase to bring the environment around the team that he wanted to see.

With Morgan, Bayliss, and Strauss at the helm, England formed a partnership that brought a different flavor to ODI cricket. The impact this approach made was massive. Their batting run rate in the post-2015 world cup phase was the top of the charts with a staggering 6.29 RPO as compared to second-best Australia who had a rate of 5.72 RPO.

Captain Morgan’s performances are overlooked at times in that exciting batting order that possesses the likes of Roy, Bairstow, and Butler, but he has been a different version of himself after donning the captaincy hat. His average jumped from 34.35 to 44.73 as captain of this England side. In that period post the World Cup 2015, the southpaw established himself as one of the best middle-order batsmen in the modern game with 3039 runs in 75 innings at a healthy strike rate of 98.5 which goes on to show how consistent he has been batting in a position that can be very tricky to adjust. He was the second-highest run-getter in that period post the World Cup for England.

Morgan has notched up terrific numbers as captain so far in the phase post the debacle of 2015 he has only lost 25 games and won 62 matches. The World Cup will have easily been his biggest achievement as captain but it was in 2018 when England amassed a world record total of 481-6 against a below-par Aussie side that was still World Champions, that the cricketing world started to take real notice of how good a side this Morgan’s England has turned out to be and what a lasting legacy they can leave behind. The fact that stands about that total are that 60 % of those runs came in 4s and 6s.

Yes, the new brand of cricket he desired had truly arrived.

Morgan’s World Cup campaign of 2019 stands out for the knock against Afghanistan where he scored 148 runs from 71 balls at SR of above 200 with record 17 sixes. He scored a total of 371 runs in 10 innings in the CWC19 campaign at an average of 41 and a strike rate of 111.07. These numbers wouldn’t have mattered for Morgan if they didn’t go on and clinch the World Cup in their own backyard with conditions suited for their style of cricket.

Frankly, today when one simply gazes past a batting trinity that comprises the belligerent leftie, Stokes, and Buttler, you are instantaneously reminded that things got get heated out there with the bat.

When Morgan eventually decides to hang his boots one day there will be a lot of people talking about Morgan the captain who won England their first World Cup but the legacy Morgan would have left behind and the impact he has had on English limited-overs cricket will be the greater achievement for him. The respect he commands over his side is fantastic to see and to accommodate a side that has people from a lot of cultures and different walks of life show the leadership skills of this fine captain.

Morgan might come across as a very quiet lad but there is no doubt about the fact that he is one of the most tactically shrewd captains in world cricket right now.

Morgan’s story of redemption as captain of England cricket will surely be one of cricket’s finest stories down the years but the bigger story will be the one where people of different cultures and societies joined hand with an Irishman to hand England their first-ever 50 over World Cup crown. 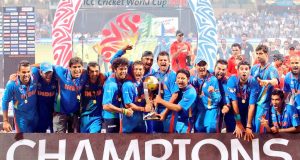 India… India! A Passionate Fan’s Account Of The Mesmerising 2011 World...

Gaurav Sethi - April 2, 2021
0
10 years is long enough time to forget a particular feeling or to overcome an emotion, unless of course it’s the feeling of watching...