A couple of seasons ago, speaking in a KKR-exclusive, Sunil Narine was asked a straightforward question.

“What’s the one big quality a spinner must have?”

His answer was simple, unlike that ‘hard-to-pick‘ bowling action.

He said, “The element of surprise.”

Special are occasions where cricketers live up to what’s expected of them.

Like recently when his compatriot Brian Lara freed his arms in that typically flamboyant style to smash a few in the Bushfire charity match, you saw Lara being Lara.

Exactly like how one saw Alyssa Healy expressing herself in the much-important T20 World Cup finals leaving Shikha Pandey clueless.

Once in a CPL game, Sunil Narine was given the ball against Dwayne Bravo’s Red Steel.

It was the super over.

What followed were four consecutive dot balls. On the fifth, Narine dismissed Pooran, who was found struggling to put bat to ball.

Then, Ross Taylor couldn’t score on the last delivery.

What on earth was going on there?

Not before July 18, 2014, the day Narine dislodged Trinidad and Tobago from the contest (akin to how upon a minister’s request the words ‘Trinidad and Tobago’ were removed by Bravo from the team name), had there been a maiden in a super over of the CPL.

No West Indian has since repeated the feat.

Surely, he wasn’t messing around when he said an element of surprise was key.

But is the mystery spinner’s bowling- the likes of which cricket hasn’t seen thus far nor seemed too comfortable scoring off- the only mystery about the 32-year-old?

Or could it be that a bigger mystery is elsewhere?

The fact that the successes he’s had in T20 leagues (representing 12 separate teams) around the world haven’t quite been found during national duties?

At that stage in his career where he’s both blooming in the buck-spinning mantra called T20s but off the radar for national contention, it may not be wrong to say Sunil Narine’s career has unraveled a bit like his bowling style.

You just don’t know what to expect.

Therefore, which Sunil Narine are you most contented with – the T20 superstar who plays for Dhaka Dynamites, Kolkata Knight Riders, Melbourne Renegades, to quote a few or the one figuring in the West Indies national team- defines a career that strangely runs in parallels.

Truth be told, the contemporary West Indian team has moved on a bit from the massive success of 2016.

The tall order of big hitters remains the only space unchanged.

Rampaul is a thing of the past, Thomas is the present.

Champion dance beat – eternal that it is- has made way for the ‘salute!’

Maybe Samuel Badree, the only competitive and established match-winner like Narine himself.

Or what about the Trini himself?

Let’s not forget he was once the number 1 bowler in ODIs and T20Is.

What’s more? He’s no slouch with the bat.

In just 57 IPL innings, he’s amassed 771 runs. His three fifties and a best of 75 suggest he can be invaluable with the bat.

Images of Narine fearlessly walking down lift seamers over mid-off and long-on have become inseparable elements of KKR folklore.

Yet, you are dejected as a Caribbean fan the moment you chance upon his numbers for his national team.

You wonder how come the ballistic missile turn docile away from the leagues?

The same mystery spinner who strikes from the meat of the bat produces a conundrum if you like upon wearing the maroon jersey.

Is he even the same bloke, you wonder, with just 155 runs from 51 games and the highest score of 30?

He may not have taken a fifer yet, but with 52 wickets from just 49 outings, Narine’s struck gold for the West Indies.

Just like he did when he debuted in ODIs for his team, getting Kohli out for just 20, in what turned out to be a rare win for his team (Third ODI, Ahmedabad, 2011) finishing with figures of 10 overs, 34 runs, 2 wickets.

In a contest where saving runs is key and equally challenging, the format already wired towards batsmen, if there’s a big reason the West Indies still need to get Sunil Narine back in national colors, then it’s his economy.

At 6.03, there’s no reason why a 32-year-old capable match-winner cannot be back.

What’s the excuse? Surely, having been reported for a suspect action, not once but twice, doesn’t help his case.

He may have even gone out of flavor- or has he?

But must we not forget that there was a man who took the brave call of opting to work on his game, improve his craft, remodel his action when he was picked for the 2016 World T20.

The same man who played a mega albeit under-appreciated part in 2012 World Cup win, clinching 9 wickets from just 24 overs (best of 3 for 9).

What hasn’t changed from the Narine then and the Narine now is the mohawk and the firmly ‘in-control’ economy.

How often do bowlers restrict with an economy of 5.6 in a World cup when those batting are Sanga, Mahela, Dilshan, Watson, Warner, Dhoni, De Villiers, and Amla?

Moreover, that the likes of Khary Pierre and Hayden Walsh Jr.- young and talented they might be don’t necessarily look that threatening should prompt selectors to abstain from giving cold shoulder to Sunil Narine.

At the same time, the man who’s clinched no fewer than 379 wickets collectively in the leagues from just 336 T20s has a deep understanding of the game.

Yet, why, despite playing T20s for seven years for Windies has Narine not earned sensational success as he has in IPL can be termed a mystery greater than that bowling action.

We like Narine when he bowls dot balls and increases the pressure. The Robin Hood who steals the game from those who seem favorable toward the benefit of those who seem marginalized.

The point isn’t that Narine hasn’t been given chances or that he has always faltered.

Remember the last he ever played a Test, in December 2013, at Hamilton, he stunned the Kiwis with a six-for.

In his case, the point is that consistency at the highest level just hasn’t been second nature to him.

Yet strangely doing unthinkably entertaining stuff like scoring 75 against King’s XI (2018) has.

So quite like his career that’s had hits and misses and several empty boxes- the future may point to the ‘but if’ scenario.

Will Narine be given a chance again? The World T20 is around the corner. Rather, does he deserve to be reinducted?

Gladly, we fans don’t have to fight that battle. 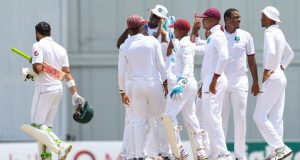 5 Things The West Indies Need To Do To Win At...

Dev Tyagi - May 7, 2017
0
Winning at home in front of regaling fans is a feeling like no other. It’s special beyond words. But when a West Indies wins,...