The talent was unquestionable. There was hardly a doubt about mental toughness. The bat in his hand seemed a sword wielded by a destructor. The only thing needed by Suresh Raina during his debut series was a stupendous show.

Back in 2005, Suresh Raina couldn’t sleep the night before his debut game against Sri Lanka at Dambulla. The southpaw got out lbw on the first bowl to world’s greatest spinner Muttiah Muralitharan, and just like many great athletes, Suresh Raina began in an inauspicious fashion.

From 2005, until the Indian Premier League premiered in 2008, Raina’s graph witnessed a downslide. A slump in form compounded with injuries; the first two years for Raina was anything but promising.

But, for a guy who stayed most of his teenage years away from his parents and suffered many atrocities in his life, getting bogged down from the situation was never an option.

Come the Indian Premier League, Suresh Raina-the devastator announced his intentions. The world got to see those beautiful looking cuts, flamboyant drives and elegant flicks. He soon became an integral part of the Indian team.

The 2009-2011 period saw a revolution in Indian cricket and we owe a lot to Suresh Raina for that. The southpaw always stood rock-solid in giving those final flourishes or chasing big totals with his aggression-mixed-with-caution touch.

at all of these times, there were names like Sachin, Sehwag, Dravid and Dhoni around him.

But maybe what we often miss but mustn’t about Suresh Raina is that he was the de-factor force that shone during run chases.

He’s been involved in countless run-chases that took India home.

Yet a question has gone unanswered.

Have we given him the recognition he deserves for his contribution towards Indian cricket?

Do we even remember Raina at his excellent best?

Batting as low as number five or number six is no easy job. More often than not, you come in the middle with a required rate to maintain, keeping in mind you don’t lose your wicket in the process.

We often talk about Dhoni’s flamboyant innings in the 2011 World Cup final, Yuvraj Singh’s stellar role in 2007 and 2011 World Cup. Deemed as the unsung hero of 2011 and 2007 world cup, Gambhir, somehow, also gets his share of recognition.

However, amongst all these guys, there was also a saviour in Suresh Raina, who was silently taking his side home whenever needed. The quarter-final and final of the 2011 World Cup were two biggest instances.

It is high time we get over the ‘century-counts’ in international cricket. Also, the last-ball finishes shouldn’t be the only ones to remember. Often, a 30-ball 40 or 20 ball 30 holds as much importance as a century. Raina’s 28-ball 34 in the World Cup quarter-final against Australia was indeed one gem of an innings. It was an innings which is engraved in my mind till date.

The 33-year old had only played a single game before the quarter-final against Australia. Hearts were pumping, nervous scenes exhibited all over as half of the side was back to the pavilion.

74 runs were still needed from 75 as Suresh Raina joined an in-form Yuvraj Singh in the middle. Under pressure 34-run knock off 28 balls played by Suresh Raina has to be one of the best knocks he has ever played in his career.

Had he given away his wicket at that point, Yuvraj Singh would have left with nothing but play with the tail. But Raina showed composure and stayed there and made sure the match doesn’t get out of hands.

He followed this up with a valiant knock in the semi-final game against Pakistan where he struck 36 runs in the final overs and guided India to post a more than competitive 260 runs on the board.

Raina is currently the second leading run-getter in the history of the IPL. And for those of you who are oblivious to this, Raina holds the record for hitting more than 400 runs in 10 out of 12 seasons held so far.

Known as “Mr IPL”, Suresh Raina has done a lot more than what he is appreciated for.

Most of the cricketers are at the peak of their career in their early 30s. However, for Suresh Raina, 33, the short-ball conundrum coupled with the coming of new blocks in the setup, unfortunately, led him to be axed from the side after the 2015 World Cup.

He did get a couple of chances afterwards but the southpaw wasn’t able to latch onto those fully. The CSK batsman, though, stills harbours the desire to once again play for India.

While India’s number-five position for the T20 World Cup is still up for grabs, can Suresh Raina tackle those nasty bouncers and make the upcoming IPL his own and thereby seal a spot in the World Cup?

Doesn’t seem very likely- what do you think? 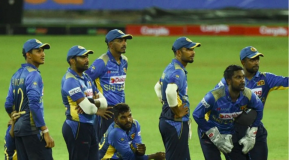 How Far Can The Lankan Lions Go In The T20 World...