Are you considered a great only because of big numbers?

Many have loved the game and done great things in it.

But how many has Cricket loved back?

Isn’t that what qualifies to be called a ‘legend?

When your deeds are recounted decades after you’ve stepped aside from the sport?

Over three and a half decades back, long before Sachin, Kallis, Warne, or Lara even arrived, one man played an inning which suggests why cricket has never stopped gushing about him since.

It was on this day in 1984 where Sir Viv Richards batted so brilliantly that he’s cited even 36 years hence.

Back then, Sir Viv Richards put 189 against his name and England to the sword.

Surely, many have gone onto hit 200s since. Rohit Sharma alone has hit three.

In 2010, Sachin became the first man ever to widen our imagination, reminding us of the possibilities that a batsman could in fact score 200 within 50 overs.

Saeed Anwar has scored a few more in an inning than what Sir Viv Richards managed then.

Yet, what is it about Sir Viv Richards’ 1984 exploits that have found such resonance?

If you hit up cricketing circles on social media, the purists argue Sir Viv Richards’ century against England was a knock they were fortunate to see.

Those who missed it, not belonging to that era, thank YouTube.

A rerun by fans promptly follows wherever cricket is adored.

And maybe we ought to be thankful to YouTubers like RobeLinda and videographers like Caribbean Cricket: The Vintage Collection.

As a matter of fact, even before arriving at Manchester, the venue he chose to discard the hosts, he had hit 5 tons in his career.

An up to that point, he had played ODI cricket for 9 consecutive years.

So this wasn’t the 23 or 25-year-old buzzing youngster from Antigua.

This was an experienced 32-year-old stroke-maker whose body had taken a toll of playing cricket for nearly a decade.

But nothing can possibly explain the importance of Sir Viv Richards’ 189 than the fact that the knock came in utterly adverse situations.

On a track where Bob Willis and Geoff Miller had quite simply tightened the noose around scoring as if someone turned off the tap, how did someone score a century?

When we talk about Sir Viv Richards, then it’s not possible to ignore his usual flamboyance and characteristic dismantling of bowlers.

That’s like talking about Lara minus the backlift or speaking of Sachin without the straight drive.

So perhaps that’s the thing about his career-best ODI score. It was a knock that required him to play a very different role than he usually did.

When Viv Richards arrived in the middle, West Indies were on the backfoot.

At 3 for 43, they’d lost a hefty troika of Haynes, Greenidge, and Richie Richardson. The famous top-three collapsed for single-figures.

Gomes and Lloyd were yet to bat.

A lot depended on the great man. And Sir Viv Richards took them on.

But it was never going to be easy.

The troika of Bob Willis, Ian Botham, and Neil Foster (225 ODI wickets combined) were hovering around the West Indians akin to a carnivore encircling a prey.

Importantly, it was almost a year since the two sides had played one another in ODIs.

It was all about who’d fire the opening salvo, Manchester’s ODI being the series’ first.

But implicit in Sir Viv Richards’ (then) sixth ODI hundred was that ability to repair the inning.

But for that, he needed the others to stick on.

But wickets kept falling. The first man to fall after Sir Viv’s arrival was Larry Gomes.

Miller’s off-break around the legs did the trick, the left-hander had no answer.

To the team’s dismay, even Clive Lloyd departed soon after, his 8 off 21 indicating the struggle to put bat to ball.

Soon after, when Neil Foster (who went for 5.5 that game) bowled just a tad bit short to Richards, he may have thought this was a good delivery.

Though, Sir Viv was in a no-nonsense mood.

Yet make no mistake.

What perhaps separated this knock from the 10 other hundreds was that there was a minimal element of risk in stroke-making; absolute abstinence from hitting in the air.

Just when Sir Viv had begun expressing himself, the scoreboard pointed to a bigger worry. Having read 4 for 63, it would upon Lloyd’s dismissal, become 5 for 89.

Those watching may have wondered: was this really the West Indies?

Yet, one man remained unflustered and kept batting.

A stylish leg-glance over mid-wicket off Botham indicated Viv was keen on a contest.

A few balls later, he was harsh on the one bowled outside off, stroking it to the cover boundary.

But further disappointment was evidenced when Sir Viv, dabbing one off Pringle called a run which was never there, only to send Malcolm Marshall back, who was by then, halfway down.

Sir Viv Richards was the last man standing. And what followed thereafter was an angry lion’s lone assault.

An unlikely alliance was formed with Eldine Baptiste. Pringle was glided down to square leg for a couple, which was signaling of intent: if the runs were on offer, they’d take them.

Soon the score moved onto 150.

But it wasn’t safe as houses for West Indies, who’d soon lose both Baptiste and Garner.

Without nothing else left to lose, one man broke through the shackles.

And honestly, it’s quite unimaginable how Sir Viv Richards, on his own took a scrambling scorecard that read 9 for 116 to 272 in the end?

A series of powerful shots all around the wicket kept the scoreboard ticking, Viv retaining the majority of the strike.

Then finally arrived the most important moment from a West Indian context.

He danced down the track to Pringle though scoring a single off the vacant area at mid-wicket.

The next over, a four glided down the on-side would see Viv raise his bat to what was a truly exasperating inning.

This wasn’t an exhibition of big luscious strikes and airborne strokes.

This was Sir Viv rotating the strike, going after 1s and 2s.

Was he toying with the English?

Because what followed from the onset of the score reading 171 for 9 would be brutal.

A ferocious flick over mid-wicket would leave Ian Botham clueless, the ball disappearing five rows into the crowd.

Then came the big six, thudded almost like a slap to Neil Foster, over mid-off.

By then, the tables had turned, the pressure was on England.

Sir Viv was in the hunt, and he’d immediately launch into a massive blow over long-on the very next over.

You could see who was sweating.

Not the gum-chewing Calypso-loving Antiguan.

A few balls later, Viv quite simply walked out of his crease to send Pringle over long-off, a third ballistic strike had been executed.

It was only unfair that not 12 but 6 were given despite the giant hit.

You could feel it: the scoreboard didn’t simply matter to Sir Viv.

Nor did the fact that this was the tenth wicket stand.

Then upon the score crossing 250, Viv went truly mad, giving Sir Bob Willis a full swing of his bat.

Then on 185, he stroked the shot of the day. On a fuller length delivery bowled around the legs, he’d move across to the crease and hit it gun-barrel straight.

In a game that’s birthed romantics, this was carnage.

And only one man would master such heroics, simply unperturbed by the toll of wickets falling around him.

Yet it must not be forgotten that what made Viv’s effort so laudable was that he emerged undefeated in the end.

Just imagine what might have happened if Sir Viv Richards hadn’t focused for 170-odd deliveries? 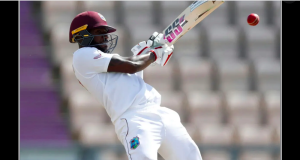