Imagine you’re just 20 years old, playing in your first-ever IPL. You end up with the highest run-tally from your side. The perfect first impression in front of the masses.

Shreyas Iyer, who was a part of India’s squad in the U-19 World Cup (2014) had made a successful entry into competitive cricket.

After his atrocities in the IPL playing for Delhi Daredevils, Iyer amassed 1321 runs to finish as the highest run-scorer in the 2015-16 Ranji season. What was even more compelling was that he managed to do so at a strike rate of 92.70. Yes, you heard that right.

Still, it was only in 2017 when he got his maiden call-up to play for Team India. At the very same time when the musical chairs for the No.4 position in the Indian team were in full swing.

He replaced Virat Kohli at No.3 who decided to rest for the series. This was a big opportunity for the youngster who had been waiting for a reasonable period and had the backing of some outstanding performances.

The day Rohit Sharma went on to slam his third double century in ODIs, Iyer who was just playing his second One-dayer for India registered a splendid 88 (70). Next game when Dhawan scored a ton, he again played second fiddle with a crucial half-century. While he didn’t gain any spotlight, Iyer was off to a fine start to his international career.

He was suddenly being seen as a potential No.4 once Kohli came back to the side. While was retained for the South African tour, he ended up batting at No.5 in the series. Why?

Because of India’s never-ending obsession of playing Rahane in ODIs and trying him at No.4. A move that had already failed in the past and didn’t work well again.

As was the case with the team management not backing players, scores of 18 and 30 meant Iyer wasn’t seen in the Indian colours for more than seventeen months. It wasn’t fair at all for Iyer but it hadn’t been fair for anyone who had vouched for the middle-order spot during that phase.

Meanwhile, Iyer became the Delhi skipper in the IPL 2018 season after Gautam Gambhir stepped down midway. The valour with which he led Delhi earned him a lot of accolades.

Two back-to-back IPL seasons with a run-tally in excess of 400 runs. His Delhi coach Ricky Ponting was quite impressed by Iyer’s acumen and his role as a leader. The former Aussie captain even endorsed Iyer for the Indian middle-order.

The World Cup followed and India’s problems with the middle order were at full display. So was the mismanagement at the middle order with India having four different batsmen at the No.4 position throughout the tournament.

After the heartbreak in the World Cup, Iyer was immediately recalled into the side.

With the World Cup done and dusted, India had to start afresh. The focus was on Rishabh Pant to grab the opportunities and mature as a player. However, from the sidelines, Iyer made it count. The youngster announced his comeback in style, scoring consecutive half-centuries coming in at No.5.

Repeated failures from Pant and Kohli’s absence led to the elevation of Iyer to No.4 in the batting order. It started with the T20Is against Bangladesh where he had a healthy run, including a knock of 62 (33).

The transition followed in the ODIs where Iyer scored consecutive fifties batting at No.4 against West Indies. He also showed glimpses of his mettle against Australia.

However, it was in New Zealand where Iyer showcased his masterclass with the bat. India whitewashed the Black Caps in the T20 internationals and Iyer was their second-best batsman in the series with an average of 51.

He was finally gaining a reputation with the bat, having taken the accountability in the middle order. KL Rahul was mighty impressed with his work ethic.

“The way he finished it off, the way he celebrated, the responsibility of being an IPL captain, he has understood how to finish off the games. He showed that responsibility in the ODIs too (against Australia). These are great signs for us,”

The ODIs began and Shreyas Iyer was off to a stellar start. The right-hander registered his maiden international ton in the first ODI at Seddon Park where he slammed 103. He followed it up with back-to-back fifties at Eden Park and Bay Oval.

India may have lost the series but Iyer made a huge statement. The 25-year old now has nine 50+ scores in 16 innings in the format. No doubt, he has become a regular feature in India’s limited over setup. He grabbed the opportunity that others didn’t latch on to.

Post the World Cup, India have played 12 ODIs in which Iyer has been the second-highest run-scorer after Kohli. He has an aggregate of 538 runs at a staggering average of 53.80 in this period. A consistent run with the bat has paved way for him to become a mainstay at the batting order.

However, another important aspect that comes into consideration looking at Iyer’s recent progress is the leadership angle. He has been at the helm for DC for the last two years. Rubbing shoulders with Ponting has played a great deal in helping him grow as an individual.

Some years ago, Ponting had played a similar role for Mumbai Indians where he worked with Rohit Sharma in sync as a player-cum-coach back in 2013. The result is there for everyone to see.

Now there’s another Mumbaikar who is working with one of the best in business. And all the nurturing seems to have helped him flourish. Throughout the last two seasons, Shreyas Iyer seemed like a calm and calculative head that assessed the situation with ease and made some really good decisions on the field. It’s still a long way ahead but we may well be witnessing the formation of India’s core leadership group some years down the line.

With the bat, he has sometimes made the opponents look silly. He also boasts of a wide range of shots in his armoury. Also, the way Iyer has established his superiority in the middle-order is commendable. Just like Pant took the world by storm in 2018, Iyer has made a similar conviction with his perseverance as a batsman.

At this point, Iyer would aim to be steady. Under the guidance of Kohli and Rohit, his growth as an individual will also be enhanced. While this may be a far fetched analysis, it will hold true if Shreyas Iyer continues to advance in a similar way. Where 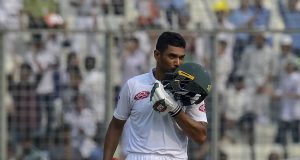 The Curious Case of Mahmadullah’s Sudden Retirement From Test Cricket

Abhinav Bose - July 12, 2021
0
Test Cricket is a format that doesn’t ever tolerate mediocrity. The superstars of the shortest format of the game are often found struggling in...